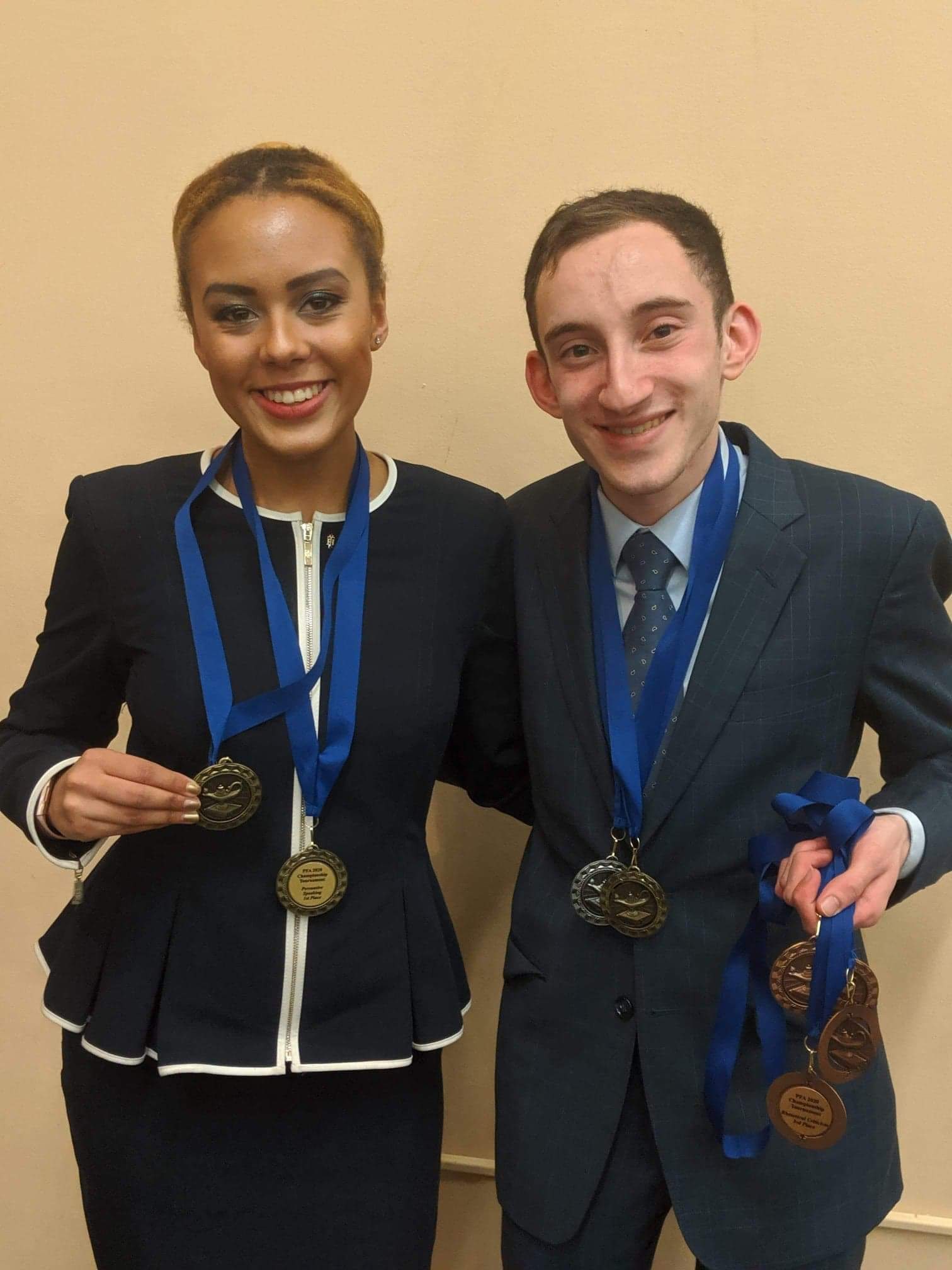 For the third year in a row, the Lafayette forensics (speech and debate) team has won the Pennsylvania State title in a landslide.

Kelly Mwaamba ’22 was crowned the state champion in persuasive speaking, with Scott Kamen ’21 earning the runner-up spot. The team overall won 37 awards across various categories of speech and debate.

Persuasive speaking is an event where a speech is designed to influence audience attitudes or actions, according to Kamen, whose speech examined medical futility and disability bias, specifically how the discontinuation of life saving treatment disproportionately affects patients with disabilities.

“There was a lot of pressure going into this [persuasion event] again wanting to defend that title,” Mwaamba said. “This year…I got to defend my title…and that was a great experience. It was stressful, but it was very rewarding.”

Mwaamba and Kamen were also the individual first and second place overall speakers in Pennsylvania, respectively. Such accolades are nothing new to the pair, who had identical finishes in the persuasion category of the state championship last spring.

“It’s such a big honor to be selected to represent your state not once, but twice,” Mwaamba said.

Earning the top two positions in persuasion qualified Mwaamba and Kamen to represent the state of Pennsylvania in the prestigious Interstate Oratorical Association (IOA) competition, which will be held virtually later this spring. Established in 1874, the group represents the nation’s oldest competitive collegiate speaking association, according to their website.

“I’m so honored to be there,” Kamen said. “This has been one of my largest goals to compete at the [IOA] and be in a competitive position where I think both myself and Kelly can do well.”

Mwaamba and Kamen were not the only Leopards to earn their spots at the state championship. The team of Ceci Montufar ’23 and Josh Hale ’23 won the parliamentary debate, which is the first time that Lafayette has won the state championship in that category, according to the team’s website.

Three Lafayette students also placed in quadrathon, a category that recognizes the best overall speakers with multiple events across different genres (interpretation of literature, public address and limited preparation), according to the team’s website.

The forensics team has gradually swelled in size and stature over the past few years, and recently added part-time coaches to the mix for the first time. Lafayette had no participants in the IOA in 2016-17, but then sent Kamen in 2018 and Lia Charles ’22 and Saeed Malami ’20 in 2019, which Malami won.

“In the last few years, we’ve seen a lot of growth in the team both competitively and in team size and additional coaching,” Kamen said. “The state championship is really a testament to the dedication a lot of the students have put into the activity.”

The forensics team now turns their focus to the national tournament season, with events interspersed throughout the rest of the spring semester. According to their website, the team will compete in the Lincoln-Douglas Debate Grand Prix, the American Forensics Association’s National Individual Events Tournament, the National Speech Championship and the National Forensics Association’s Championship Tournament.

“Last year I was really excited for us to have an opportunity, and it was taken away from us by the pandemic,” Kamen said. “And given how unlikely it was that both of us would get the Pennsylvania spots again…I’m at a loss for words…I’m just very honored that both of us get this second chance to actually be at this tournament together.”

Beyond their relationship as teammates and competitors,  Mwaamba and Kamen have become close friends during their time together on the forensics team.

“Scott and I have been on the team together now for three years…we miss traveling together and things like that, but this will be a really good way…for [Kamen] to finish his forensics career and for us to do it together as friends,” Mwaamba said. “Representing our state for the last time together will be a very special experience even if it does have to be virtual.”