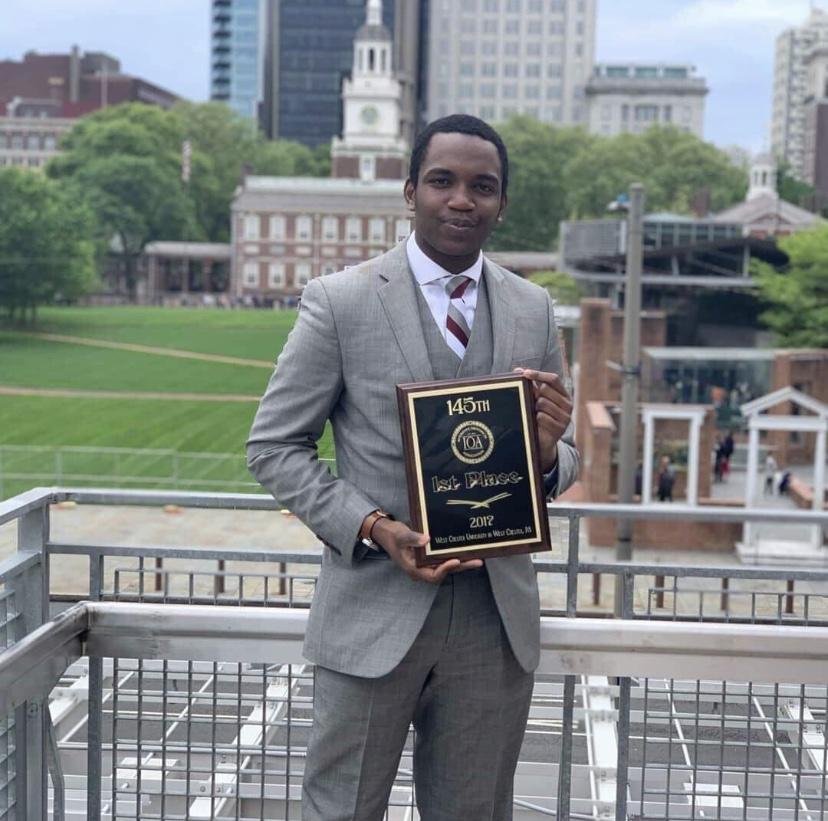 Malami also competed in the National Speech Championship from March 23 to 24 where he placed fourth in Persuasion, and at the National Forensics Association (NFA) from April 17 to 22 in Santa Ana, Calif. From there, he made it to the IOA, the longest running speech competition.

Malami’s winning speech had a personal connection for him.

“I’m from West Africa, it was a big topic. The topic was recommended to me. I felt it had a deep personal connection since it came from where I’m from,” he added. “Seeing how many people change their personal decisions throughout the year because of [my] recommendation was amazing. That made me feel happy and proud.”

Scott Kamen, President of the Lafayette Forensics Society, described how the IOA is a prestigious national tournament.

“Every year, only two competitors from each state get to attend. In 2016 and 2017 Lafayette didn’t have any qualifiers. Last year I got to attend and this year our school achieved both of the Pennsylvania slots with Thalia Charles [’22] and [Malami],” said Kamen.

“It has been a long time since Lafayette had a semifinalist at this tournament and we never had a finalist…when we learned that [Malami] would be Lafayette’s first finalist at IOA, and this was a huge accomplishment,” Kamen added. “[Malami] went head to head with the best from each state and becoming the National Champion at this tournament.”

Malami explained that each year the competitors pick a topic and continue to refine it until it is concise and well-tuned. Malami’s speech was persuasive speaking, meaning he researched a topic and practiced preforming the speech throughout the year.

“Persuasion is a 10-minute long speech with the goal to persuade, or move the audience to change their mind and adopt an action to solve a problem that exists in world,” said Scott Placke, Malami’s speech coach. “[You] use evidence to persuade.”

According to Placke, Malami may have done over 50 drafts of his speech over the course of the year.

“The topic was something he cared about initially but grew to care about more deeply the more research he did on it. There’s no way to be involved in the process of researching and performing and not caring,” said Placke.

“This is a competition of advocates and potential future leaders in the country and world. They all care deeply about their topics. All of these speeches are personal and powerful and real,” Placke added. “You need to demonstrate your capacity to care if you want your audience to care about the change you want to make.”

Kamen added that this semester the forensics team had attended various national tournaments, each with their own process of qualifications as well. Anshuman Mishra ’21, Kelly Mwaamba ’22 and Luisa Gunn ’21 had accomplishments of their own.

“Especially Luisa, who is currently considered one of the top eight Lincoln-Douglas debaters in the country. I think this is indicative of all the work our team has put in this semester,” said Kamen.

Malami explained that he hopes to improve next year in the NFA.

“I was Lafayette’s first finalist in IOA as well as champion, [which] was fun to see happen. It has been a lot of hard work to get where I am now. It’s good to finally see parts come to fruition,” said Malami.

Placke said he was very emotional after they announced that Malami had won. “I cried,” he shared.

“After he won, I gave him a big hug and it felt like I was floating for a few minutes,” said Placke. “That was a really big moment in my career of working with students.”