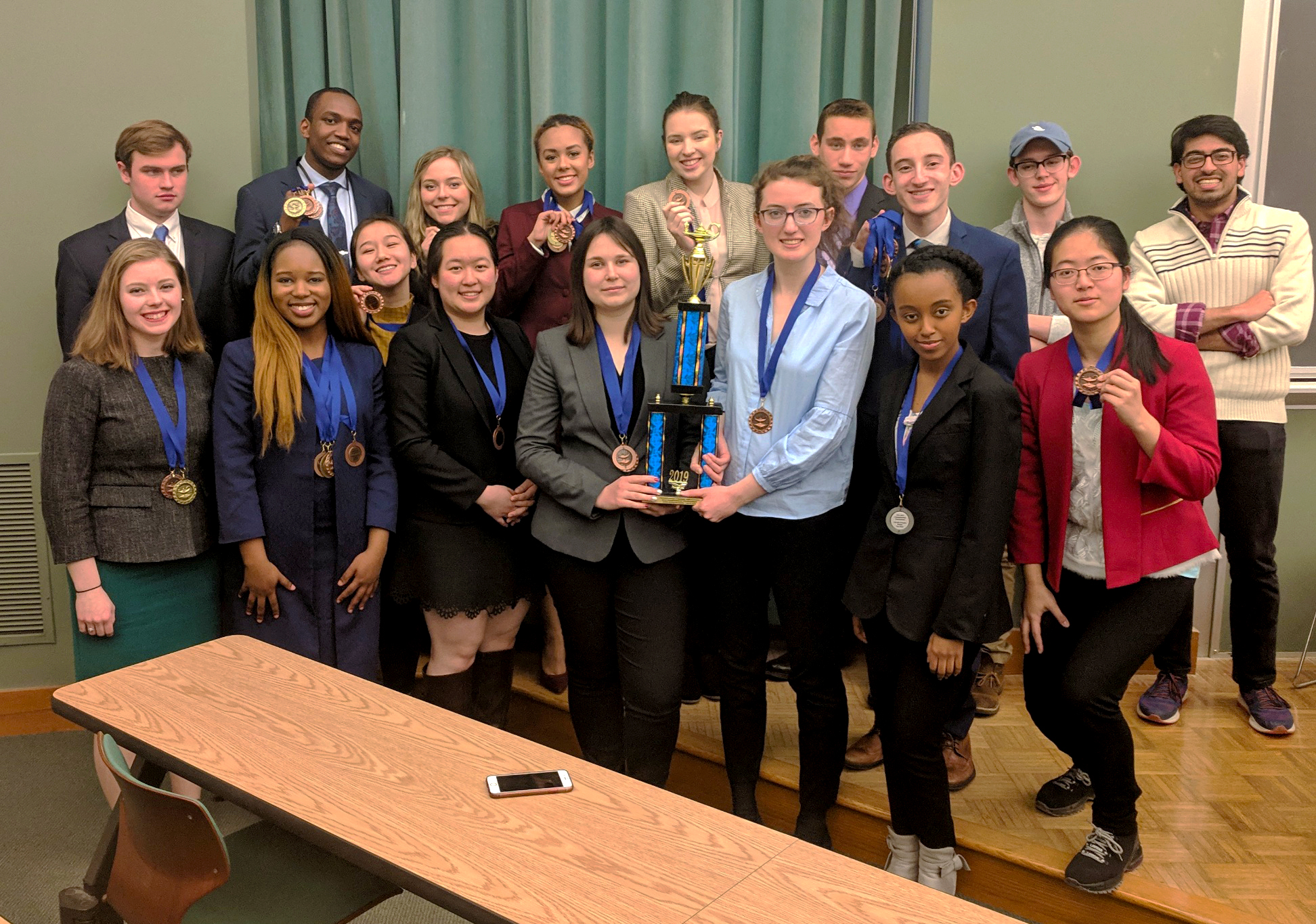 At the Speech and Debate State Championship this weekend, the Lafayette Forensics team took first place overall for the first time in a decade. The tournament was hosted on campus, and the young Lafayette team boasted finalists in eleven of the thirteen events, and champions in five.

The team participated in preliminary rounds all day Saturday and Sunday morning, and then elimination and final rounds on Sunday afternoon, and had team members participating in all 13 of the events.

At each state tournament, the two top placers for persuasive speech are chosen to represent the state of Pennsylvania at the Interstate Oratorical Competition, the longest running speech competition in North America. This year, both seats were filled by Lafayette students, Thalia Charles ’22 and Saeed Malami ’20. Their speeches will be published and included in the Library of Congress.

Vice President of the team Luisa Gunn ’21 said that everyone had done a lot of work beforehand and was relatively confident going in, but noted that there was still uncertainty as to how the day would turn out.

“On any given day, you don’t know how things are going to go,” explained Scott Placke, Director of Forensic Activities at Lafayette and the director of the Speech and Debate Team. “You put yourself into best possible position you can, but nothing is certain.”

The president of the organization, Scott Kamen ’21, said he expected that the team would come in third, while Placke “had a suspicion they would take second.”

Charles was the championship winner for persuasive speech, Malami and Mwamba for duo interpretation, Kamen for rhetorical criticism, Gunn for Lincoln-Douglas debate, and Lauren Stango ’22 for dramatic interpretation.

“The growth was amazing,” Kamen said, “especially for people who had never done Speech and Debate before.”

Placke explained that there are four categories that team members can take part in: debate, prepared speeches, interpretive events and limited preparation.

In a debate, there are normally two people per round, both of whom prepare to argue each side of a topic that is provided to them in advance of the competition.

For prepared speeches, students write a ten minute speech before the tournament, memorize it and perform it at the competition. By contrast, in a limited preparation round of the competition, the students do not know what they will be delivering a speech about before the round begins.

Students can also take part in interpretive events, which are similar to acting. For example, in a dramatic interpretation event, a participant takes a piece from a play and performs it.

Kamen said that everyone involved was thrilled about the overall win. He noted that the team has no seniors, and only one junior who is not currently abroad.

“We’re very sophomore and first-year heavy,” Kamen explained, “so we thought this would be a really good rebuilding and growing year for next year… and next year was the year we were going to be shooting for the championship.”

Placke said that the team welcomes new members to walk on the team, as he works with inexperienced speakers and debaters to develop their skills before competing.

Placke said that he has definitely seen improvement in the students who were new to Speech and Debate at the beginning of the semester. Gunn recounted watching a student whom she had mentored give a speech, noting that the student “seemed like a whole new person.”

“[I am] always amazed to see people grow so much,” Gunn added.