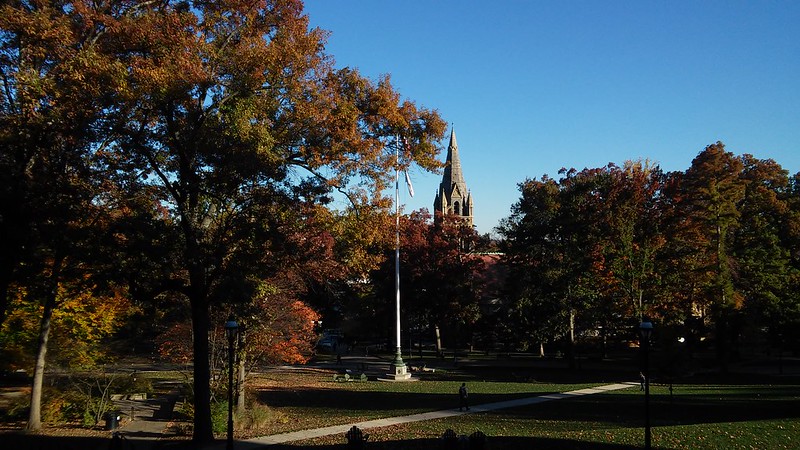 Lehigh was voted the No. 4 party school in the US by the Princeton Review in 2016. (Photo Courtesy of Lafayette Flickr)

At the peak of its membership in the 1980s, Lehigh’s fraternities numbered 34, according to the Philadelphia Inquirer. As recently as 2016, Lehigh was ranked the No. 4 party school in the nation by The Princeton Review.

In the past few weeks, however, the institution has come under duress. On Jan. 28, Lehigh President John D. Simon circulated an email to the student body informing them of an indefinite “pause” placed on all Interfraternity Council and Panhellenic Council chapters following a spring recruitment marked by a wave of reports from new members, parents, and anonymous complainants regarding “alcohol, hazing, and recruitment/new member” practices that posed “risks to the health and safety of students,” as reported by the Brown and White, Lehigh’s college newspaper.

This pause suspends the current new member pledging period, prohibits chapter events unrelated to chapter business, and designates all Greek housing as dry, including individual rooms. The council chapters will ultimately be able to submit new plans, mapping a new vision for Lehigh’s Greek Life and suggesting disciplinary measures for their own chapters and members.

The news comes after a prolonged struggle between the college and its students to discipline violations within the school’s Greek organizations. In spring 2019 Lehigh reported the existence of 14 fraternities and 11 sororities, down by four fraternities and one sorority since 2015.

The most recent closure occurred on January 20th with the dissolution of fraternity Phi Kappa Theta. Just a day before the “pause” announcement, the Delta Chi fraternity was suspended following reports of alcohol and cocaine abuse, according to an Philadelphia Inquirer report.

Though the university issued a 10-point plan to improve Greek life last spring, including a total ban on hard alcohol and a new policy requiring specially trained, live-in graduate assistants in every house, it has yet to see significant results, according to an article in the Brown and White.

As of spring 2019, Lehigh’s website reports that 22.6% of their 5,115 undergraduates were involved in Greek life. In comparison, approximately 39% of those Lafayette students able to rush are members of one Lafayette’s six sororities or six fraternities, according to Lafayette’s website.

Vice President for Campus Life Annette Diorio said that Greek life enriches the college’s culture with its ability to “provide social, philanthropic and leadership opportunities for students who choose to affiliate.”

However, she noted that there are situations where the college can, and has, put a pause on certain Greek organizations.

“The College has occasionally and typically in conjunction with the National Headquarters, temporarily stopped activities of individual groups to investigate allegations,” she said. “Any information we receive about potential violations of policy is investigated, and if we verify any violations of policy develop a plan that includes sanctions aimed at altering the behavior of the group.”

In the past year, such sanctions have entailed social suspensions and educational measures used in the wake of alleged violations by Delta Kappa Epsilon, Delta Upsilon, Delta Delta Delta, and Delta Gamma related to reports of hazing, early bids and other undisclosed transgressions.

Despite this, such drastic action such as a total “pause” has not been undertaken by the college for at least the past two decades.

Panhellenic Council member Sandi Manfreda said she was optimistic for the continued survival and success of Greek organizations at Lafayette.

“Right now we have all…full functioning sororities, and we’re just really excited to keep that momentum going and to really want to show the whole campus how great this community can be,” she said. “I think we often get a negative reputation, especially with the press.”

“This year is the 40th anniversary of sororities on Lafayette campus…along with being the 50th year of women on campus,” she added.

At Lehigh, the 100th anniversary of the birth of the campus’ Greek life is slated for 2022. Whether its 25 currently extant organizations will be around to celebrate it is yet to be determined.