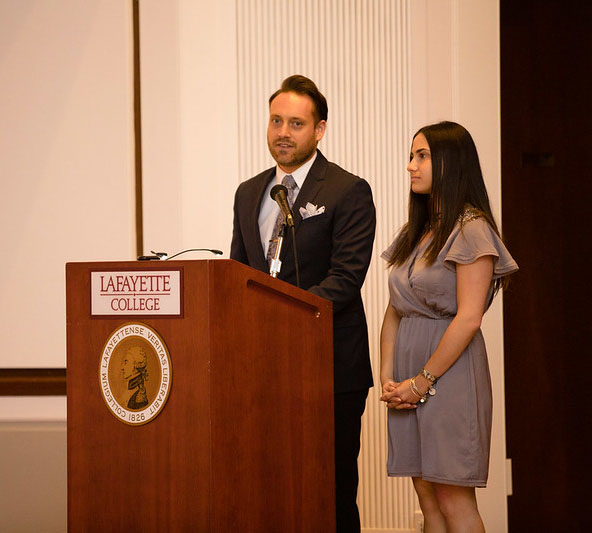 Ayala’s time at Lafayette was marked by big transformations to the Greek life community. (Photo courtesy of Lafayette Communications)

After six and a half years at the helm of Lafayette’s Greek life, Associate Director of Student Involvement Dan Ayala has resigned and will depart Lafayette at the end of the month to assume the same role at East Stroudsburg University.

Director of Student Involvement Vanessa Pearson announced the staffing transition in an email to Greek-affiliated students on Monday afternoon. Ayala said his decision was simply a career transition and a new opportunity for growth, and that Pearson would meet with all chapter presidents during his transition to assess their needs and “hold down the fort for this spring” before the position is filled.

Ayala’s resignation is the third change in the Division of Campus Life since the start of the semester, after Chris Hunt and Jessica Brown both left during winter break.

“The departures that have occurred in Campus Life this year are unrelated, and we don’t see any trend or cause for concern,” President Alison Byerly wrote in an email. “Our goal is to focus on supporting students and ensuring a smooth transition.”

Ayala’s time at Lafayette was transformational for the Greek life community. His tenure saw the addition of two fraternity chapters, Chi Phi Rho and Delta Tau Delta Nu, the return of the Zeta Psi fraternity chapter, the creation of an annual accreditation program and a revised living group policy which allowed the continued growth of Greek life at the college.

“I think the goal always is to leave your chapter or your community better than when you found it,” Ayala said. “I can wholeheartedly say that I think, from 2013 to now, I am leaving this community in much better shape than it was.”

Ayala leaves the college as one of the longest-serving directors of Greek life, a role he says experiences lots of turnover due to the difficulty of the work. He said he thinks his departure at this point in the year is well-timed.

“When you look forward, you oftentimes look back,” he added. “I think in the long run it’s better that anyone in this role leaves at this time, just so you can get a search going and people in place so that by the time the next academic year starts, we’re hitting the ground running.”

When Ayala arrived at Lafayette in 2013, the Board of Trustees had recently completed a review called the “implementation and assessment of Greek life,” which recommended that a new, revised living group policy be written before any growth occurred. Ayala’s efforts to rewrite the policy and create an expansion plan were instrumental to the additions of the fraternity chapters.

“Delta Tau Delta fraternity [and] Chi Phi fraternity are the beneficiaries of that policy,” Ayala said. “So we now have a larger fraternity community because of that, and I’m proud of that.”

Former Chi Phi president Max Kushner ’20 said that Ayala worked “night and day” to help their chapter recolonize in advance of being reinstated as an active fraternity.

“He was keen on giving me advice and he made himself so accessible to us,” Kushner said. “He was a friend.”

“Throughout all last year, and during my transition, it’s been really great to work with Dan because he’s very big on being transparent,” Maria Salmeron Melendez ’21, president of the Delta Gamma sorority, said. “The fact that there was somebody who was there to ensure that process went as smooth as possible meant a lot.”

Ayala was also crucial to the continued presence of the Panhellenic Council, the governing body for the college’s sororities, including conducting the first ever audit of the council, according to Pearson’s email.

“It has been an amazing experience working with him,” Saskia Cooke ’20, executive vice president of Panhellenic Council in 2019, said. “His door was always open for any questions, and he’s an advocate for students at the college. He always had our best interests at heart.”

Ayala’s work as an advisor to fraternities and sororities also involved giving out sanctions to greek organizations as part of the school’s conduct process, a role he admitted was challenging at times.

“I own that entirely,” he said. “I don’t always widely advertise this, but I’m very analytical and deliberative by nature, and so my job is to never win a popularity contest, my job is to come in and do what’s right and advance the inherent good of what I think is the fraternity and sorority movement.”

Ayala plans to bring his successful Greek life infrastructure from Lafayette to East Stroudsburg, and strives to “help that [Greek] community along” when he arrives.

“I think what I’m excited about with East Stroudsburg is the fact that it is a community that has had their Greek person be a revolving door, so they actually have no infrastructure built,” he said. “So I’ll be taking a lot of the policies and procedures that I’ve put into place here at Lafayette and try to build that up and get it in a much better place.”

“At the end of the day, I consider myself to be a problem solver,” he added.

As for what he’ll miss most at Lafayette, Ayala said the biggest thing will be the interactions with members of the community.

“I could be cheesy and say the students, and of course I’m going to miss them,” he said. “[But] without the support of my colleagues in campus life, there’s no way I could’ve been successful or would have stayed as long as I did.”