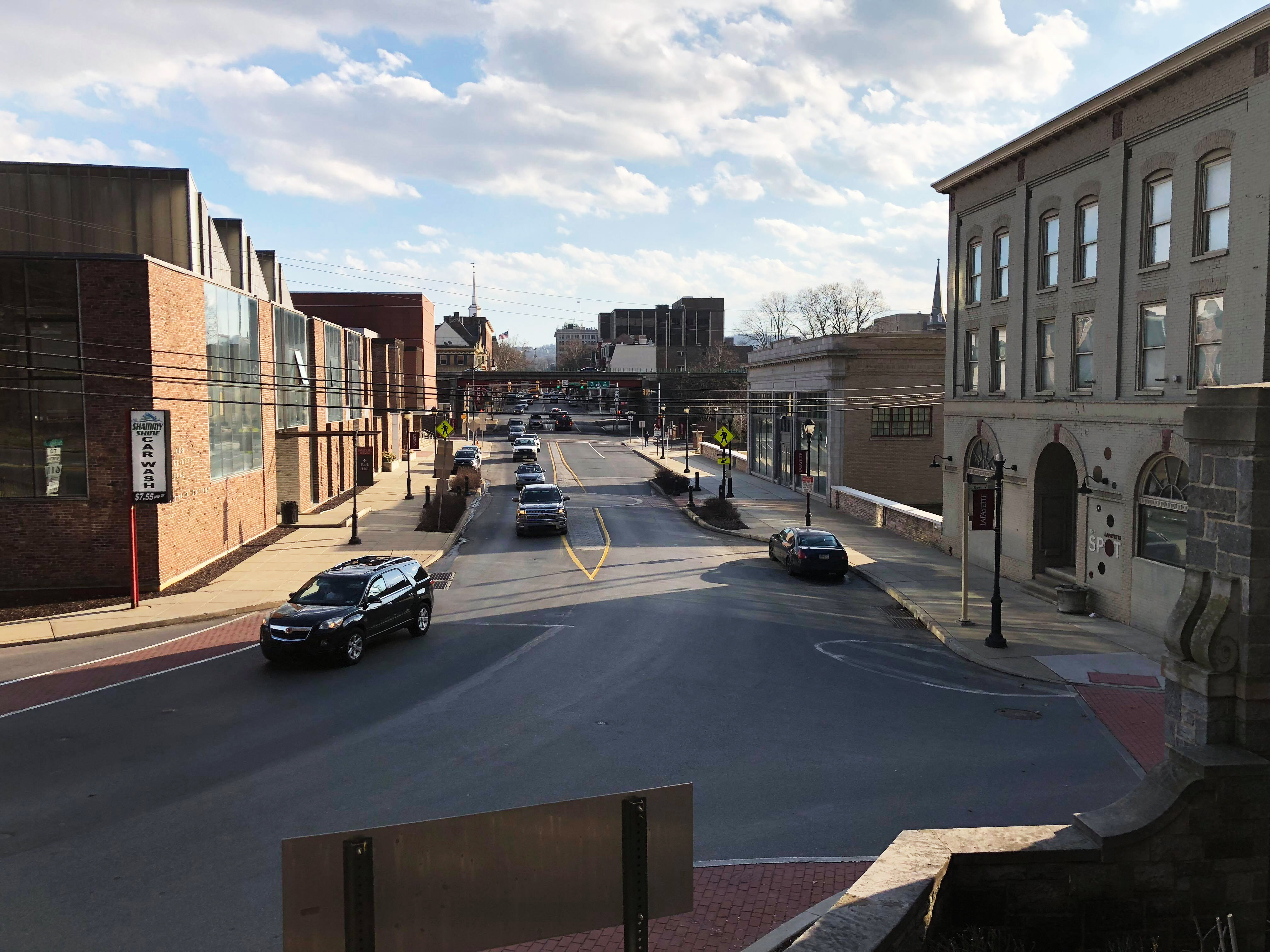 As Lafayette looks to expand, the bounds of campus start to become fuzzy, with the college’s push for dormitories on McCartney St. and public safety and facilities operations moving to Bushkill Dr. On the downtown Easton front is the arts campus, where those who frequent it say that school-provided food options are lacking, transportation is hazardous and staffing is relatively low but resilient.

Joe Swarctz is the lone custodian of the four arts campus buildings: the Williams Visual Arts Center, Buck Hall, the Spot and 248 N 3rd St., oft-referred to as simply ‘248.’

It’s “difficult but it keeps me busy for eight hours,” said Swarctz, who is an artist himself and enjoys his role at the arts campus. Even when events such as plays or films are put on at Buck Hall, though, Swarctz said it is left to him alone to take care of the cleanup, a job which he said is taxing but gets him overtime.

He began by only taking care of the Williams Visual Arts Building down the hill and the Feather House uphill, but once more buildings were built and added to the arts campus, they fell under his watch as well. He said that although he is happy where he is, he thinks custodial staff on campus is understaffed in general, and he could benefit from more help in some ways.

Technical Director Alexander Owens, who wrote in an email that he works anywhere from 60 to 80 hours a week from September to May working with students on different theater projects and maintaining budgets, among other responsibilities, believes he would benefit from added help as well.

“[Having an assistant] would offer many advantages, not the least of which is helping maintain a work-life balance,” he wrote. Stephanette Schwartz Smith, production coordinator, helps at times but is understandably quite busy with her own work up the hill at the Williams Center for the Arts, he added.

“[An assistant] would allow us to spend more time with students teaching them the ins and outs of theater as opposed to always being too busy to stop and take a moment to explain items in more depth,” he wrote.

Theater and English professor Suzanne Westfall said that for the arts campus to really become considered part of main campus, the student culture and “attitudes” need to change. Along with that, transportation needs to improve.

“We have a culture at Lafayette of people who drive to the gym and drive to pick up their mail,” she said. It is this attitude which makes students think that the arts campus is a remote and faraway place. This combined with the lack of a reliable shuttle or transportation, she said, will take years to overcome. Theater students like Emma Krebs ’20 are accustomed to going up and down the hill up to twice a day for class, but many are not used to that kind of travel.

The Lafayette reported last week that students had trouble getting to class at the arts campus given the snowfall and the deay of the shuttle until 1 p.m., which students were not notified of until after morning classes had begun. President Alison Byerly said that the college would work on communication paths between public safety, the shuttle company and students, and added that the connection between the arts and main campus is a work in progress.

“We’ve been working for awhile on the challenges of trying to connect what some refer to as the downtown arts campus with downtown,” and the glass elevator going up and down the hill was one of the options considered, she said. Vice President of Finance and Administration Roger Demareski also said that although those plans were put on hold for the time being they remain an option the college may look to in the future.

Tim Barry ’20, however, commented on how crossing to the College Ave. sidewalk remains a dangerous journey even without inclement weather. Last year, Noah Decker ’19 was struck by a car while crossing between Bushkill Dr. and College Ave but escaped uninjured.

Westfall also said that more staff is needed, particularly in Buck Hall which is sometimes locked because there is no one permanently attending to a front desk or receptionist area.

Art professor Nestor Gil is familiar with the troubles of having his department based at the downtown arts campus. He arrived at Lafayette over six years ago, when the Williams Visual Arts Building housing the studio art portion of the art department had already been down the hill for about 11 years.

Gil said he embraces the location of downtown, because it’s “all a matter of elevation”—the arts campus, if looked at from a bird’s eye view, is not much farther from buildings on campus as they are from each other.

As someone who walks to work from college hill, however, he’s experienced firsthand how treacherous the journey can be. He’s also seen how it’s affected his students.

Common among many complaints by those who frequent the arts campus is that school-provided food options are lacking. Grab-and-go at the Spot is available for a limited time each day, and theater major Matt Peters ’19 said he often resorts to just bringing his own food downtown. Gil and Westfall said that they would enjoy having a place to get coffee at the arts campus.

Westfall pointed out that in their entertainment building, Buck Hall, there is no place to get refreshments for theater-goers.

Peters and Krebs both agree that the campus can be isolated and it can be hard to attract non-arts students to attend shows and events down the hill.

Peters pointed out the benefit of having a secluded campus to work diligently on projects, without much “foot traffic,” as he put it. Maggie Shannon ’20, also a theater student, emphasized how great it is to have these creative spaces so close together downtown, especially when it came to her work as the titular role in “The Drowsy Chaperone.”

However, as much as he appreciates the arts campus, Peters said he feels there is a general lack of appreciation for the arts at Lafayette.

“When you think about the experience [at Lafayette], the arts is not one of the things that come to mind. When you think liberal arts, the arts should be a major component,” Peters said. He added the school places great emphasis on engineering, with the humanities seen as “a playground for engineers.”

Westfall, too, said she sees the same problem of Lafayette placing too great an emphasis on engineering and the sciences while not acknowledging the role that the arts plays in a liberal arts education.

Stephanette Schwartz-Smith’s name was originally incorrectly spelled “Stephanie.” The article has been updated with the correct spelling.