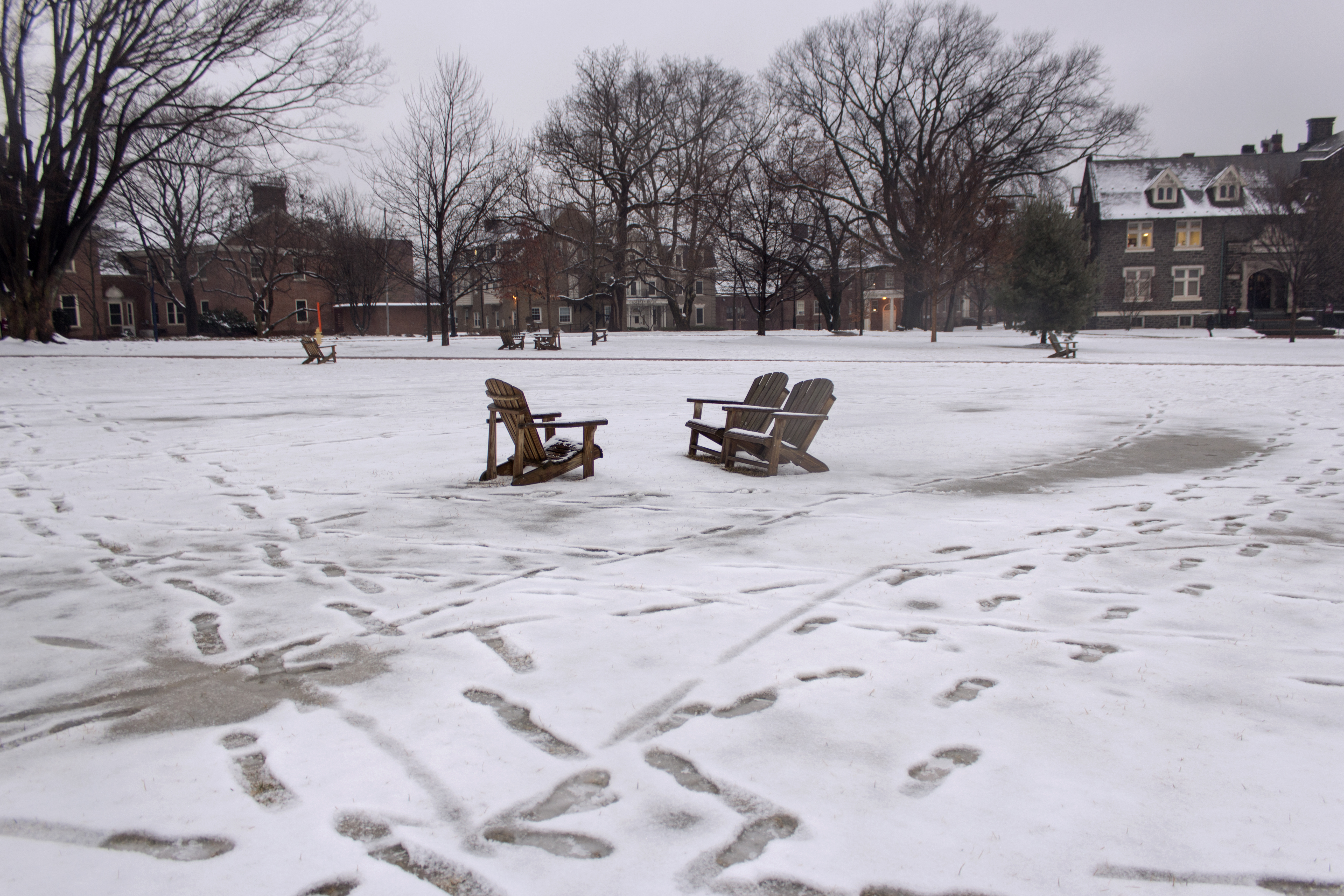 Tim Barry ’20 thought he would be taking the shuttle to his 10 a.m. class down the hill at the arts campus last Wednesday morning. Snow had accumulated early on Feb. 7, alternating with freezing rain and leaving an ice sheet on top of the snow. With temperatures at a high of 36 degrees, slush formed.

Little did Barry know, the shuttle company, Palmeri Group, had decided to suspend services until 1 p.m., and he ended up walking, or sliding, down the sidewalk next to College Ave. He was 10 minutes late to class. The notification about the delayed shuttle did not get emailed to students until 10:57 a.m., Barry said, despite the fact that the shuttle schedule begins at 8:30 a.m.

“I went to the shuttle stop, and I’m waiting and waiting. It just doesn’t end up coming,” Barry said. He hurried to class, but “the sidewalk wasn’t plowed or anything, it was all snowy and slushy. Crossing the street to get to that sidewalk is usually a nightmare. But with the snow…it was a lot scarier.”

Josh Klein ’19, who was running late to class down the hill that Wednesday morning, said he slipped and fell twice on his way down the historic steps but luckily escaped uninjured.

Olivia Coughlin ’20, who had class down the hill at 11 a.m., made the trek downtown via the historic stairs, too. She said the trip was hazardous, to say the least.

“Nothing was shoveled. Nothing was salted. The railings were covered in ice. It was super dangerous walking down,” she said. She added that she was confused about the delay in notifying students of the shuttle’s schedule.

Parking and Transportation Specialist Bruce Hill said that the reason for the delay in getting the word out about the shuttle was because of a snafu within the Palmeri Group.

“It took a little bit longer this time, because the owner of the company happened to be plowing their area their parking area with their buses and lost track of time,” Hill said. “He didn’t realize it was after one of the shuttles should have already started and been here. They didn’t contact me ahead of time like they normally do. But once that happened then we went through the process of getting the statement out.”

Barry and Coughlin were so outraged by the conditions that they decided to take their grievances to President Alison Byerly. They emailed her directly outlining what they had experienced getting to class, and Byerly said she took note of their concerns.

Byerly said their emails were “perfectly polite notes saying it was tricky [that day] finding out that the shuttle wasn’t running so close to class and [they] had to work quickly to get there and [they] found that the stairs were slippery. I did look into that with campus life and facilities, and the problem was that the notification of the shuttle not running didn’t make its way through the people that could announce it as quickly as it might have and that is something we can fix in the future.”

Theater and English professor Suzanne Westfall said she sees this as a much larger issue with the college’s “benign neglect” of the downtown arts campus.

“I’ve talked to the school about [maintenance of the historic steps and transportation downtown] many times before,” she said, adding that she’s specifically voiced worries to the administration, facilities operations and public safety. “We have big concerns about the stairs in general, especially at night. They instituted a shuttle system which does not work very well.”

She also did not understand the decision to cancel the shuttle, as professors traveled much farther that morning to get to class.

“Our faculty drive from all over the Lehigh Valley, and they can’t get a shuttle from the main campus down to the arts campus?” she said. She added that it is not fair to give students the ultimatum to either “take their life in their hands” by walking down slippery steps or choose to not come to class at all.

Director of Physical Planning and Facilities Operations Bruce Ferretti wrote in an email that facilities operations “monitor[s] the weather forecasts to get an idea of when the storm will occur and schedule[s] our snow removal crews accordingly.” He added that salting and clearing the snow on the historic stairs is “limited to hand shoveling because of the terrain and the difficulty getting snow removal equipment to the stairs.”

Pingback: Bridging the gap up and down the hill: the struggle to integrate the arts campus – The Lafayette