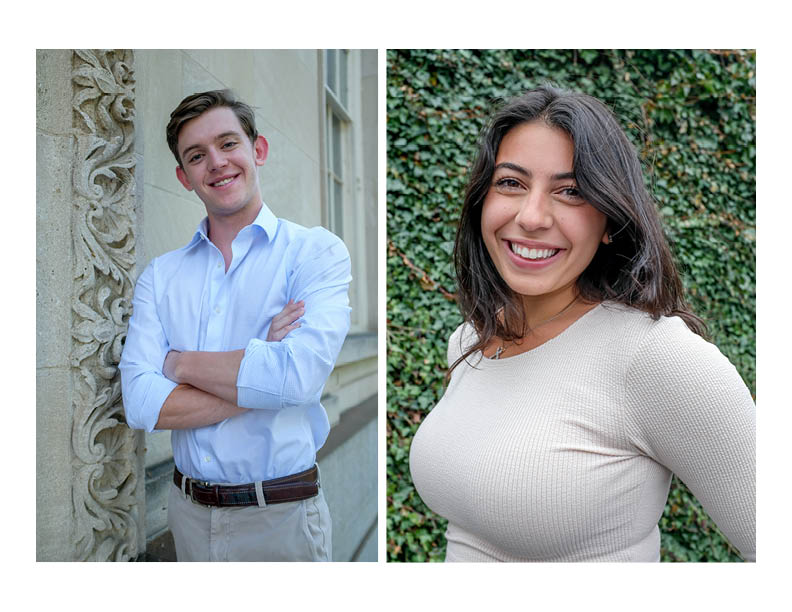 Lauren Ameruoso ’22 (right) is Hank Scheffler’s ’22 (left) number one choice for co-director of the Greek Life Committee, though nothing is set in stone for the diarchic leadership model. (Photo courtesy of Scheffler and Ameruoso respectively)

Scheffler ’22 mentioned the idea of a co-directorship in an interview with The Lafayette. When proposed at a transitory meeting between the former and current Student Government executive board, he noted that it was received “relatively well by everybody.”

However, Scheffler said that the co-directorship is not the committee’s top priority, noting that the first Student Government general body meeting has not yet been held.

“We’re torn between the goals of the committee and need to address those prior to the co-directorship status. I have no plans to run a totalitarian system where my voice as director is the most important. It’s a family style committee and the importance of position comes far after getting the job done,” he said.

The discussion of co-directorship comes after Scheffler’s victory over incumbent Lauren Ameruoso ‘22 in the most recent executive board elections. Scheffler joined the race after students anonymously noted at a candidate forum that as a student unaffiliated with Greek Life, Ameruoso could not run for director according to the student government by-laws. The Student Government executive board postponed the election for a week and passed a motion that allowed non-affiliated students, like Ameruoso, to run for this election cycle. Scheffler, who is president of Delta Kappa Epsilon, came away victorious with results “on the closer side,” according to current Vice President of Student Government Ross Coleman ’22.

Student government will likely consider the co-directorship when they return to campus in the fall.

“I cannot definitely say anything right now, considering the amount of other Student Government initiatives coming to a close as the semester ends,” Ameruoso said. “We have had conversations about a possible co-directorship among both the outgoing and incoming executive boards, and I am sure it will be one of the first things addressed in the fall.”

“We are still getting a feel as to how we would go about this upcoming year in introducing these ideas of ‘rebranding’ or ‘redirecting’ of leadership and the type of initiatives our new Greek Life Committee will be able to lead. I do not have a clear cut answer yet, but I would like to point out that I do have high hopes for their committee and how we, at Stu Gov, will be able to support them as a collective,” she said.

“It was honestly just a matter of the executive board coming together and saying, ‘all right, this is pretty cool, having them both as co-directors.’ They agreed to it. Done. And it was really easy to do that,” he said.

Nevertheless, questions surround the logistics of a potential co-directorship, including who would serve with Scheffler and how they would be selected. Coleman noted that it is possible, but considering the polarizing nature of Greek Life on campus, not ideal, to have either two affiliated or two unaffiliated students on the board.

“The ability to have everyone’s voice heard by having two different sides serve as directors. I think it’s definitely something to consider,” he said.

Scheffler said that Ameruoso would be his top pick for co-director, but “due to the democratic parliamentary nature of student government,” he is unsure how the position would eventually be selected. In any case, Ameruoso noted that, as a member of the committee, the potential absence of a co-directorship will not inhibit her or the committee’s ability to further their goals.

“My role as Greek Life Director definitely came with its privileges, meaning I had access to more resources, was always contacted first, and was known as the go-to person for our committee. However, working as a committee member or as the co-director will have no impact on my personal ability to lead projects with the Greek Life Committee, facilitate important conversations surrounding student experiences and campus life, or continue the projects that were created this year,” she said.

News Editor Lucie Lagodich ’22 is a member of the Student Government Executive Board and did not contribute reporting or writing to this article.