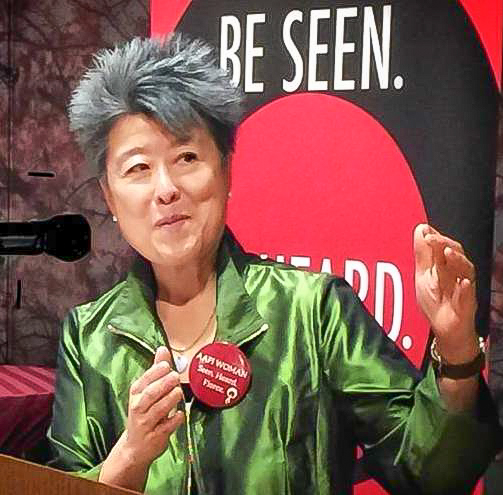 For author and activist Helen Zia, education is the most important tool to heal a divided American society.

This past Monday, Zia spoke at the college as part of a set of events as Asian American Pacific Islander (AAPI) Awareness Month. The event, entitled “A Racialized Pandemic,” was moderated by AAPI Awareness Month board members Victoria Puglia ’21 and Milena Berestko ’22.

Zia has written extensively in the past on the Asian American experience as the author or co-author of three books. Her accomplishments have led her to be a torch bearer for the Beijing olympics, and she was also named one of USA Today’s women of the century in 2020.

Berestko began the event by asking Zia to talk about how her life experience influenced her decision to become a journalist, activist and author.

“When I was a kid growing up in New Jersey, there were very few people who looked like me,” Zia explained. “At the same time, the Civil Rights movement was going on, Black Americans were standing up, and a whole national movement was talking about race in America and about the inequalities that continue to exist.”

“I connected with what civil rights leaders like Martin Luther King, Malcolm X, Rosa Parks were saying, and the need for all people to stand up, because the Civil Rights movement wasn’t Black people alone,” she continued. “It was people from all backgrounds and races and walks of life. So I really felt like that was something I wanted to be part of, a change that would make it possible for all people to be recognized in their full humanity, with their full human dignity.”

Zia spoke about how when she went through college, she did not have a particular career in mind, but she knew she wanted to be part of something beyond herself and know more about the world. While her parents liked the idea of her becoming a doctor, Zia was instead drawn to the interdisciplinary field of Public and International Affairs.

Puglia then asked Zia to discuss how understanding the history of Asian Americans informs Americans of what is happening in the United States today.

In response, Zia discussed how, as a child of Chinese immigrants, she felt simultaneously totally invisible and as though people looked at her family like they came from another planet. Racist comments and actions towards her and her parents were not uncommon.

“We had eggs thrown at our house. We tried to move into one neighborhood in Philadelphia and were told that they don’t want Orientals there,” she recalled. “I saw all the discrimination, but to everyone else it was invisible. It was as if we were the enemy, the foreign invader.”

Zia said she grew up seeing horrible images of people that looked like herself in the media, particularly movies, and she wanted to know what caused this hate. Zia discussed how most people go through the majority of their education “without any hint of what the history is of people of Asian descent in America.”

To her, this missing education means that people remain ignorant to the Asian American struggle.

Zia also discussed how people are often shocked when mass killings involving Asian-Americans appear in the media. According to Zia, groups are invisible until something like a spike in hate crimes happens to put them back in the news.

“Ignorance is a real feeling in democracy. We can only make a democracy work if we are informed about our neighbors, about their history and backgrounds of Civil Rights and of Asian Americans,” said Zia. She added that she believes that knowledge of history would open people’s minds.

“Ignorance is a privilege,” answered Zia. “You can’t be ignorant when you’re walking in a danger zone…I knew because I am a student of history and a writer of history that a pattern of the way that Asian-Americans have experienced the pendulum swinging of American history is when there is a crisis—when there is a terrible economic crisis, for example, or a war—what governments often do is try to find somebody else to blame, because it takes the pressure off the administration.”

Zia explained that there are certain stigmas that have been attached to groups such as Asian Americans for centuries. They are identified as enemies, and this is generalized to all Asians in America. Therefore, when the pandemic began, the Asian American community was well aware that it would be bad because the virus was identified in China.

Berestko then asked what people can do to stop AAPI hate and become more informed about Asian American history that is not taught in the classroom.

“I think number one is realizing that we are all ignorant, because we have all been consuming dis-information, or bad information that tells us who is trustworthy and acceptable, and who is another,” Zia said. “So part of what we have to do is we have to learn, and we have to unlearn.”

She discussed how people have to be willing to learn certain things and do research, but to also know that not all sources of information are trustworthy. Zia also emphasized how important it is to “acknowledge our own ignorance, and not feel ashamed of not knowing.”

She also added that another thing an ally can do is report discrimination they see it, whether it is physical or verbal violence.

Zia then addressed what justice or freedom for the AAPI community would look like: “I would say that most Asian-Americans would answer today saying they would like to live without fear of being attacked if they go outside, and feel like their child could go to school and they wouldn’t have to worry that something terrible would happen. People just want to know they can live life as people feel safe.”

Zia went on to explain that physical safety is only the first step.

“I think most people would actually like more than that. The idea that we could all be treated with dignity, that we would not be second class citizens, that, if something happened, we could expect fairness and justice,” she continued.

“There’s really a lot of information that we have available, and all we have to do is have the will to learn more,” said Zia.