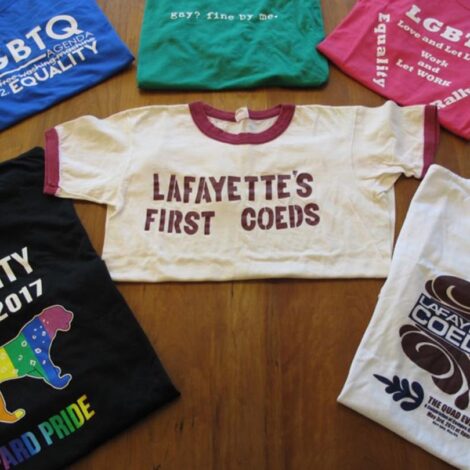 Panelists featured for this discussion are also involved in the college’s Queer Archives Project. (Photo courtesy of Lafayette Communications)

In one of the last events of the college’s celebration of 50 years of coeducation, panelists turned a focus on female students whose experience may have consisted of a “place without a space.”

This past Monday, Women’s, Gender & Sexuality Studies and English Professor Mary Armstrong moderated a panel entitled “Out and Proud: Lesbian, Trans, and Queer Women of Lafayette.”

The panel featured three alumni, Kristen Berger ’15, Leah Wasacz ’16 and Brooke O’Harra ’95, as well as English Professor Emerita Carolynn Van Dyke, who taught at the college from 1980-2014. Armstrong referred to this panel as an “emergence of a larger wave of stories and life.”

Armstrong began by asking the panelists what the climate was like for queer people and queer women while they were on campus.

Van Dyke explained that in 1980, the campus was still very male-dominated and had mostly male faculty, as the college had only been accepting women for a decade.

“To be queer back then did not meant to be LGBTQ+,” Van Dyke said. “It meant not white [and/or] female.”

Berger described an instance in the spring of 2014 in which there was discrimination based on her sexual orientation, and a legal representative told her that in the state of Pennsylvania, there was no law protecting someone from discrimination based on sexual orientation. She said she took that next summer to “get comfortable with who [she was] and to come out to herself publicly,” and then, she found ways to support other students in the LGBTQ+ community. She recalled that when she founded the student group Quest, she wanted to create a club that was “behind closed doors” that would create a safe space for anyone questioning their orientation and/or gender identity.

“We changed location every week so no one knew where we were [in order to] respect people’s privacy and decision to come out,” Berger said.

Berger, who was captain of the softball team while at the college, also addressed the problems she faced in athletics.

“I saw absolute silence around this topic,” she said. “I laid the groundwork for what is now, where every single team is an Athlete Ally. 22 out of 23 teams have signed on to this pledge.”

O’Harra explained that she was never out when she was at Lafayette. She said that there were moments where she felt like an outsider, as there were no students that she knew who were out as gay or lesbian.

Wasacz said that her experience at Lafayette had a lot to do with her identifying as transgender.

“I came out publicly in 2015, and in 2015 it seemed like there was a huge conversation about it. I was like, ‘Well I’ll talk to you about it.’ There were talks on campus that I showed up to to talk about experiences. Experiences I’m grateful for [and] that I feel like people were generally curious to learn in a way that wasn’t stigmatizing,” Wasacz continued. “Now, it’s become very common that most people know about it. I’m very thankful for that.”

Berger also discussed a shift in awareness while she was on campus, in part due to Michael Sam, a football player at the University of Missouri, coming out. She explained that The Lafayette newspaper came out with a story on the topic with a photo of a Lafayette football player with a question mark in place of a face. The article discussed the “prospect of a gay athlete at Lafayette.”

Berger was interviewed by a reporter for The Lafayette at the time, who asked her if she thought there could be a gay athlete at the college.

“I felt my face get red, I was shaking at that point…Was this a good way to come out? Would my teammates be mad?” Berger recalled. The week after the story ran, a male student athlete came out – and then Berger was the second out athlete on campus.

“I think those statistics right there are very powerful,” Berger said.

Reflecting on personal experience, Wasacz addressed potential disadvantages that came with her coming out while at the college.

“I said I feel like people were curious to learn, [but] there are downsides that come with that,” Wasacz said. She recalled one instance where she was wearing a dress in the library, and a male student she had never met came up to her and asked why she was wearing a dress and if it was part of a science experiment for the psychology department. This, to Wasacz, was “really disheartening.”

“It didn’t feel like an expression of hate, but more of alarm and confusion, that something was happening and it had to be explained in some way,” Wasacz said.

Armstrong added that while she was getting a tour of campus when she first came to the college in 2009, she could not find a women’s center or LGBTQ+ center.

“I realized there was nothing—no space for LGBTQ+ or queer [people]—a place without a space. Sometimes those stories work as metaphors. If you think there’s no place for you, there’s no place for you. There’s no space,” Armstrong said. “What does it mean to grow up and hear who you are? You don’t go to college developed, you go to develop. There was no space to become the person you really were, but to hide or be scared to be that person, as you were figuring out who you are. So much of LGBTQ+ history is not being seen.”

Armstrong then asked the panelists what they think makes a college “wonderful” for queer women.

O’Harra said that she taught at Mount Holyoke College in 2008, and experienced a moment where she wished she could “do it all over again,” as students there already had questions about pronouns and safe spaces.

“I felt like Laf was way behind in history. At my last year at Laf, all my friends in New York were queer, then at [Lafayette] it didn’t exist,” O’Hara said.

Van Dyke added that classes have to be part of the change, where students are “exploring identities at a distance, reading, acting, having the opportunity to go back and forth.” She also added that having a safe space where people can open up to others is crucial.

O’Harra emphasized that having POC, transgender, and LGBTQ+ faculty is very important.

“What gives permission is visibility,” Berger said. “That comes with our faculty. That would’ve helped hugely if some coaches who I knew were gay, were out. If you looked at the biographies of male coaches, it said they reside in Easton, Pa., with their family. You look at the biography of female coaches, and if they are queer [then] you don’t get that they reside in Easton with their partner. That wasn’t part of the conversation, and visibility matters.”

According to Armstrong, each panelist has already been a part of the Queer Archives Project or will be in the future. The project is based on oral histories such as these for anyone who is interested in learning more.

Correction 4/5/21: The title of this article has been changed to correct a spelling error.