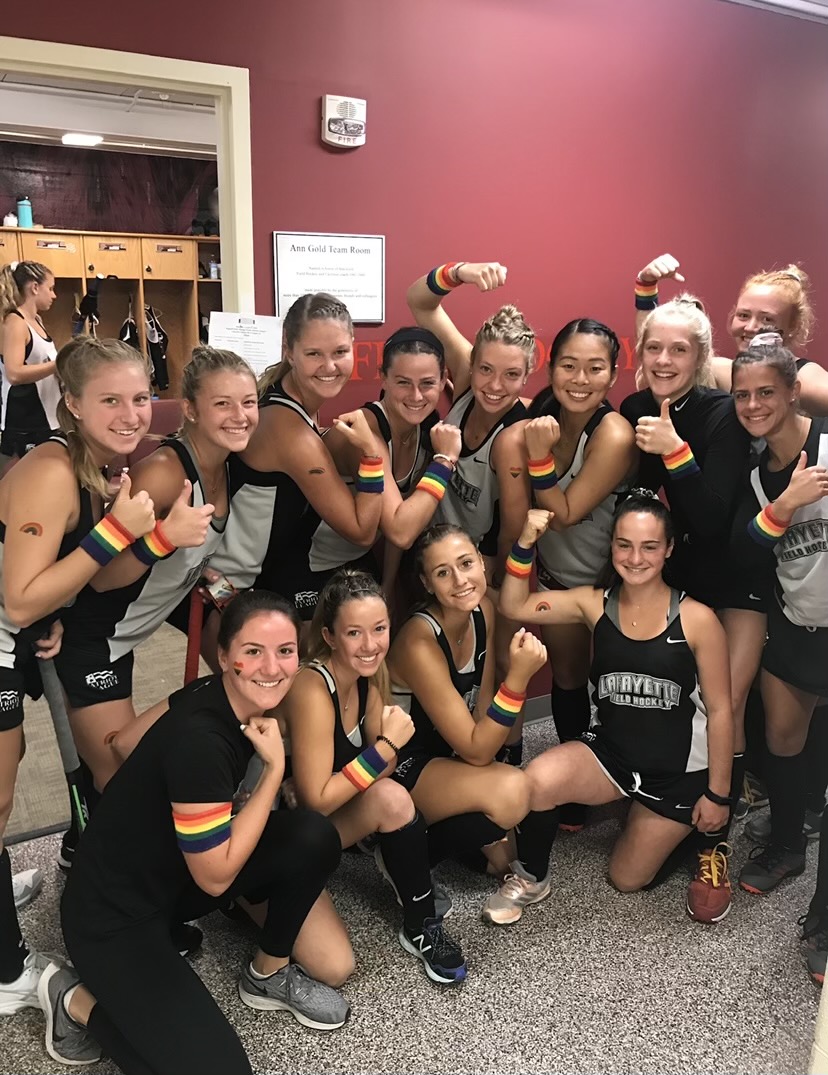 According to the Athlete Ally website, the organization believes “everyone should have equal access, opportunity, and experience in sports—regardless of your sexual orientation, gender identity, or gender expression”.

Lafayette’s Athlete Ally club is still relatively new, but it has already grown in numbers and has made strides in making both teams and the campus community a more supportive environment.

“All of our groups that support underrepresented groups within the athletics program, but also campus wide, are necessary to provide a place of support but also to raise awareness and to get others involved in different initiatives,” said Athletic Director Sherryta Freeman.

“I am certainly pleased with the work they’ve done and appreciate the partnership. Last year before the pandemic, we were able to have an athlete ally game for each of our sports, and I think it’s had a tremendous presence and their work has been really phenomenal. We need more support for different groups on campus, but Athlete Ally for the LGBTQ+ community has been fantastic.”

When senior field hockey player and current co-president Eva Kaplan ’21 joined the club her freshman year, it had about 10 members. After branching out and gaining support from clubs on campus with similar initiatives, the group has risen to around 50 students with the goal of making the athletic community a more educated and accepting place.

The group now has an executive board, subcommittees, and an activities panel. They also have frequent meetings with their national organization liaison and other campus chapters.

“In our meeting last week, we had each subcommittee leader from our executive board pick an athlete and make a little presentation, and then we broke out into breakout rooms and kind of educated ourselves on athletes through the years, from Billie Jean King to more recent like Megan Rapinoe,” said Kaplan. “We’re also really active on social media now which is awesome. We’re highlighting an athlete every week, and we’re also partnering with Go Leopards as well so they’re going to be reposting a lot of stuff, and that will reach a greater audience.”

The organization also has plans to hold a Spring Athlete Panel with alumni, which was initially slated for this past spring. They also plan to amp up their presence at Athlete Ally games.

“Obviously not having our normal activity for the fall has changed some of our efforts and initiatives. I know they’re still active on zoom and things like that,” said Sherryta Freeman. “I think first and foremost I would want to hear from them and how they want to have their voices amplified and what they would want from the department to support their initiatives.”

“Our coach has been awesome and she’s super supportive. I think a lot of coaches have also followed her steps,” Kaplan said about field hockey head coach Jennifer Stone.

Kaplan also noted that a major component of the organization’s work is engaging with “safe-zoning” for athletes and coaches. Safe-zoning is a type of training to help participants “learn about LGBTQ+ identities, gender and sexuality, and examine prejudice, assumptions, and privilege,” according to the Safe Zone Project website.

“Coaches are usually safe-zoned at the start of their coaching, but that could be 10 to 20 years ago and they don’t really have to get it renewed,” Kaplan said. “There’s so much new verbiage and language that’s come to play, so one of our initiatives is re-safe zoning all of our coaches. Our entire club is safe-zoned, which we did as a club last spring. We also think a cool activity would be implementing safe zone training during freshman orientation.”

“Some goals that we have as a club are partnering with more organizations on campus such as Athletes of Color,” she added. “We’re primarily for athletes, but we don’t want to be exclusive to the athletic community. Students who aren’t athletes also know our initiatives and can still join.”