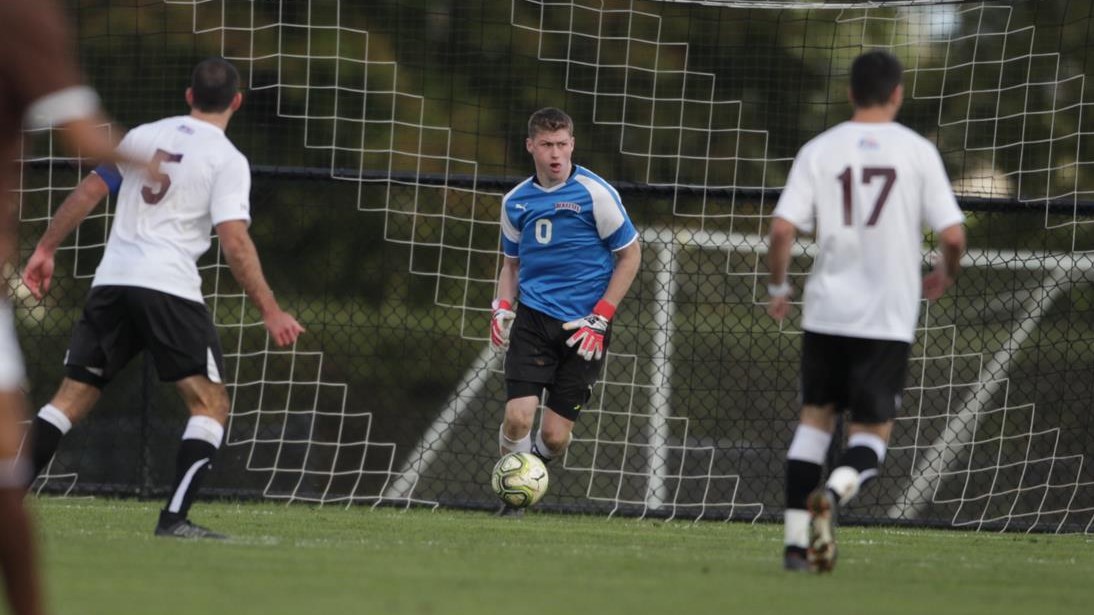 Junior goalie Alex Sutton did not face a single shot on goal in the win over Bucknell. (Photo courtesy of Athletic Communications)

The Lafayette men’s soccer team kicked off their season this past Sunday on the road, beating Bucknell by a score of 1-0.

Senior forward Martin Ssessanga broke the stalemate in the 53rd minute as he curled in a ball from the left side of the box for his third career goal. Ssessanga’s score earned him conference Player of the Week honors.

The early win puts the Leopards in first place of the Patriot League North Division after the conference was split into two divisions of five teams to limit travel and the risk of COVID-19 transmission. Each team will play the other schools in their division once.

Lafayette began the season ranked fifth in the conference preseason polls, trailing the four teams ranked ahead of them by a significant margin. Bucknell ranked one seed below the Leopards in sixth place.

“Before any game we play, we scout the team, and identify the strong and weak points of a team,” said sophomore forward Jon Ford. “This game we were more focused on identifying and playing our style of soccer as we have not played a game as a team in 476 days.”

This style of soccer helped the Leopards reach the Patriot League Championship last year, coming up one goal short against Lehigh. This year, however, Lafayette is without several key defensive players from last year’s runner-up squad after four defenders graduated.

“Alex [Sutton] had a fantastic game,” said sophomore forward Hale Lombard, who noted that giving up zero shots on goal is “very rare in soccer in general, but especially rare in the Patriot League.”

Lafayette, in comparison, peppered Bison goalkeeper Bennett Schwartz with 16 shots on the afternoon, four of which were on net. Lafayette’s closest chance of the first half came when Lombard connected on a header near the penalty spot that he put on goal, coming off the corner kick from sophomore midfielder David Mizrahi. The Leopards produced seven shots in the first half, but the match was scoreless going into the break.

“Being that it was the first game of the season, there were plenty of mistakes made,” Lombard said. “I think we could have communicated better throughout the game, but that will come together when we continue to play with each other more.”

Fortunately, Ssessanga’s strike in the 53rd minute was all the Leopards needed.

“I think everyone is going to remember the goal,” Ford said. “We pressured them high and forced them to make mistakes. Once we gained possession we countered them and played a long ball across the field that ended up going in the net.”

Despite only winning by one goal, Lafayette led in almost every major statistical category. The Leopards outshot Bucknell 16-0 and totaled four corner kicks to Bucknell’s one.

“We did a good job of keeping possession and winning balls in the middle,” Ford said.

Although the Leopards hadn’t taken the field in over a year due to the ongoing pandemic, there were still some silver linings from the extra time off.

“I think we became closer,” Ford said. “We were still having team meetings and we tackled a lot of controversial issues such as race and sexual misconduct. In addition, we formed a relationship with Public Safety and made plans for community service. We formed a book club to give out free books to children in the Easton community.”

“You can tell we are comfortable with each other on and off the field just by the way we play,” he added.

Although the Leopards emerged victorious from their season opener, there is still a lot of soccer left to play. Having fewer games than in a typical fall season naturally ups the ante for each of the six regular season games this spring.

“We will look into film from our last game so we can build off our success in the game, and see what we could do better or change in the upcoming game,” Lombard said.