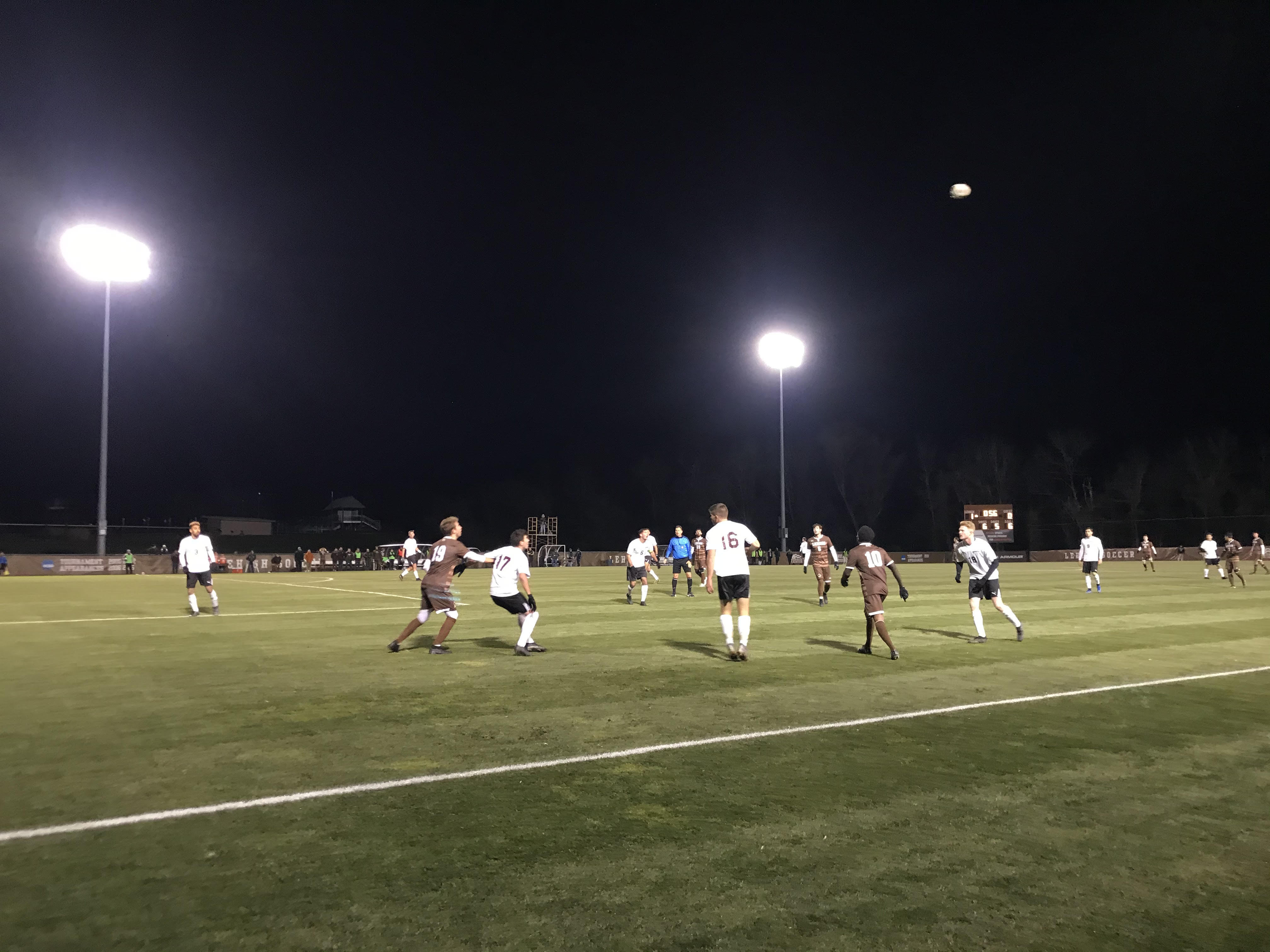 This was the team’s first winning season since 2012. (Photo by Andrew Hollander ’21)

The Lafayette men’s soccer team ended their postseason run with a 1-0 loss to rival Lehigh last Saturday in the Patriot League Championship game.

The Leopards finish the year with a 9-7-5 record, the first winning season since 2012 when the team went 9-8-4 and won the Patriot League Championship over American. Lafayette was ranked 10th out of 10 teams in the conference preseason poll in August.

“I think they represented Lafayette soccer and Lafayette College in a really positive way with their effort and their play. Unfortunate, you know, very disappointing…the fact that we played well I think makes it even a little harder to swallow…and the performance that we did put on Saturday night against Lehigh was one that I think made everybody proud,” Bohn added.

The two teams battled in front of a sold out crowd of 1,705 fans at the Ulrich Sports Complex, including hundreds of Lafayette students, clad in maroon and white, who made the trip to Bethlehem to cheer on the team.

“I mean, the atmosphere was just awesome,” Bohn said. “I’ve been in six finals now as a coach and by far that was the best atmosphere of any championship game that I’ve been a part of.”

“It was unreal just walking out in the starting lineup and everyone’s screaming, knocking their feet on the bleachers, just creating all that noise,” senior defender and captain Christian Williams said. “It was a game, a moment and a memory that none of us will ever forget.”

Lehigh registered the first five shots of the game, several of which were blocked by the Lafayette defense in addition to a save by sophomore goalkeeper Alex Sutton. Senior forward James Gibson had the first scoring chance for the Leopards in the 19th minute but his header missed wide.

Freshman midfielder Yiannis Panayides nearly found the back of the net off a header in the 30th minute, but it was saved by the Lehigh goalkeeper. Sophomore forward Marcos Kitromilides and freshman forward Hale Lombard also recorded shots on goal in the first half. The teams went into the halftime break tied 0-0.

Less than 10 minutes into the second half, the Mountain Hawks scored off a ricochet that found its way to Michael Tahiru, who buried the goal. Some of Lafayette’s strategy was focused around neutralizing Josh Luchini, who led the conference in scoring and was named the Patriot League Offensive Player of the Year.

“We had a game plan defensively,” Bohn said. “Unfortunately we gave up the goal but I thought at least containing [Luchini] gave us a real good chance to win.”

Despite having his foot punctured by a Lehigh forwards’ cleat in the first half, Williams played the remainder of the game. He attributed his perseverance to “adrenaline,” after being interviewed with crutches on Tuesday. Bohn called Williams an “ultimate warrior.”

Lafayette put the pressure on in the second half as they searched for the tying goal. Senior forward Dylan Royalty and Lombard each had shots on goal in the final 10 minutes, but both were saved. Sophomore midfielder Will Echeverria had the best scoring chance off a cross in the 86th minute but Lehigh’s goalkeeper, Will Smith, made a diving save to keep the Leopards off the board. Panayides had a final chance to even the score but his shot went wide and Lehigh held on for the win.

“Specifically towards the end of the second half we had plenty of great opportunities,” Williams said. “It was good to see that we were going at [Lehigh], creating these chances. Unfortunately we didn’t get one in the net but I think that shows a lot about us, that we’re not going to give up no matter what time it is, no matter how late it is. I’m proud of our guys no matter what.”

Sutton made five saves between the pipes, and finishes the year with a 79.8 save percentage including nine shutouts.

“Having [Sutton] behind us just gives us that leverage knowing that he’s going to make plenty of saves and keep us in all the games that he did this season,” Williams said. “He’s a great player and he’s only going to continue his success.”

Lafayette won just one conference game last season and scored 12 total goals across 17 games. This year, the team won six conference games, including two in the playoffs, and scored 33 goals in 21 games. Williams attributed some of the success to positional work in practice and “trying a few different things.”

“[This season] was a huge difference on both ends,” he added. “I think everyone from the players to coaches were just bought in. We took that underdog mentality to heart and wanted to prove everyone wrong.”

After qualifying for the playoffs as the No. 4 seed, the Leopards beat No. 5 Colgate 2-1 in the quarterfinals before upsetting No. 2 Loyola in the semifinals 5-4 in penalty kicks.

The team will graduate nine seniors, but will return several of their top goal scorers including sophomore midfielder Sebastian Varela, Lombard, Panayides, and Kitromilides. Bohn said that the biggest thing the seniors instilled in the soccer program is “belief.”

“There was never a time where the nine of those guys pointed fingers or made excuses,” Bohn added.

In March of 2017, Bohn wrote a quote on the bulletin board of his office that reads “we’re going to be good again.” The quote is still on the board today, and Bohn said it has served as a reminder to the coaching staff of what it takes to develop a team and rebuild a program.

“And now, two and a half years later, we played in a championship game and had a winning season, hosted a playoff game for the first time in almost two decades,” he added. “So this team and this season are really special to me and very special to Lafayette soccer’s history with the fact that they were able to help us get back to our winning ways.”