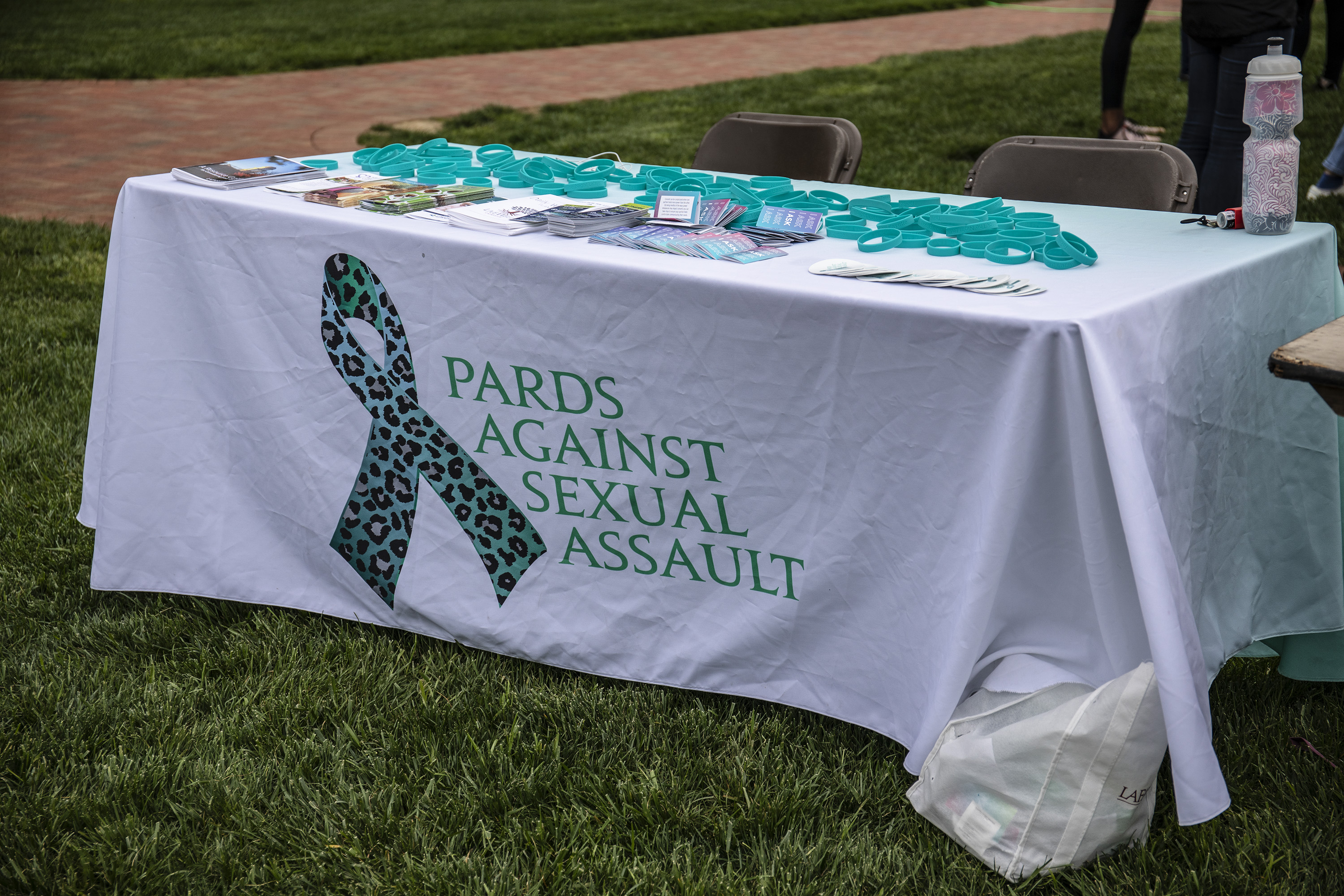 The authors focused on both short- and long-term goals to address sexual misconduct and survivor advocacy. (Photo by Elle Cox ’21)

Student activists are calling on the college to assume a greater role in combatting sexual violence on campus. In an open letter delivered to the administration and the Board of Trustees this morning, members of Pards Against Sexual Assault (PASA) demanded that the college create a comprehensive strategic plan around goals presented in the letter and “lead the initiative…to foster a safer and more inclusive campus community.”

The timing of the letter was due in part to the @anti.violence.laf Instagram account, which rose to prominence over the summer and provided an anonymous forum for survivors to share their experiences online. Many of the posts expressed concerns about the way individual cases were handled by the administration, and additionally identified systemic issues in both the handling of sexual misconduct cases and the treatment of survivors.

The letter also comes amidst the ongoing search to replace president Alison Byerly, who will be stepping down at the end of her contract in June. This transition provides an opportunity to significantly shape the direction of the college’s policy going forward, a fact which is not lost on the letter’s authors.

Divided into short-term and long-term goals, the letter hones in on specific and immediate actions for the college to take in addition to changes that may take several years to enact. It also includes special emphasis on two key demands: transparency, and the expansion of the Office of Educational Equity (OEE).

“A lot of frustration just comes from the fact that when policy is presented to students, it’s not very digestible,” PASA co-president Ella Goodwin ‘21 said. “It just comes down to putting the information out there in a way that students can actually understand it. Right now, I don’t think that resource is out there.”

While the authors proffered specific goals for the school, the overarching theme of the letter is to move the onus of combatting sexual assault and advocacy for survivors away from student groups like PASA and OneLove, a group which advocates for victims of relationship abuse, and onto the administration. Expanding the OEE, the letter reads, will play a crucial role in achieving these goals.

“By no means are we experts at all,” Goodwin said. “I think we’re passionate, motivated people who are interested in this topic, but…we asked [the administration] to develop a strategic plan to address all these areas, and that needs to be done in consultation with experts in the field who actually are trained in best practices around sexual violence prevention and advocacy.”

The OEE “needs to consist of more than just the Title IX Coordinator and the new Student Advocate and Prevention Coordinator” which the college is currently hiring for, the letter reads. The authors wrote that they were pleased with the new position but were also “extremely worried that this person will be overworked and not adequately supported.”

“The college must make an active effort to ensure that the Office of Educational Equity continually expands until it is staffed with individuals who are trained to address all facets of discrimination on campus,” they wrote.

One section of the long-term goals was dedicated to Greek life, where issues of sexual and gender based violence are “rampant” within chapters, the letter reads. Greek chapters have had a tumultuous year after calls for abolition intensified over the summer, when hundreds of allegations of racism and sexual assault were made on social media. Then in October, some organizations had alleged violations of COVID-19 safety guidelines while hosting social events, which contributed to a surge in cases on campus.

The letter calls on the college to provide a “well formulated plan” to combat sexual and gender based violence within Greek life specifically, and urges the administration to respond to the results of the Greek life climate survey, which was released in November, and “communicate what steps will be taken.”

“Greek Life organizations must be held accountable for what occurs within their organizations,” the letter reads.

Libby Mayer ‘22, co-president of PASA with Goodwin, noted that issues of misconduct are often handled internally, which benefits the organizations and is often to the detriment of the reporting party. Goodwin also acknowledged that Greek organizations are governed by national rules which complicates the conduct process and diminishes the influence of the college.

“In the Greek life realm, when complaints arise, the [chapters] are encouraged to handle them internally which I think benefits the chapters themselves, but it’s not necessarily beneficial for that person for the outcome that they wanted,” Mayer said.

Another section of the long-term goals revolves around the admissions process, and exhorts the college to be transparent with the community about how they handle students who apply to Lafayette but who were the “respondents in Title IX cases at their former institution.” Goodwin said there was a theme in the social media allegations of instances where students transferred schools due to past conduct violations, both in and out of Lafayette.

Goodwin and Mayer said they were unsure about the specifics of what, if any, measures are in place to screen applicants with potential conduct issues, and planned to follow up with the admissions office.

The end of the letter circles back to the central argument that the college administration “must take a larger role in prevention efforts,” and thereby lift the burden off of student groups, who have for years done the bulk of education and awareness around these issues.

“To improve our campus climate, the administration must take responsibility and commit to making real, tangible changes,” the letter ends. “If you are not prioritizing the health, safety and respect of all members of our community, how can you expect students to do so for each other?”

The @anti.violence.laf Instagram account highlights the urgency of PASA’s demands. Sexual violence is already severely underreported, but student mistrust of the process could drive the number of reports down even further.

“Logically, [student mistrust] in the process is totally going to affect whether people feel like they can report,” Goodwin said.

Correction 1/26: The first sentence of the last quote from the open letter was changed to reflect a later version of the letter submitted by PASA after we reviewed the initial file. The change was small and not related to content.

Dear Lafayette College students, persons. I am very proud of all of you for holding the perpetrator and the administrators accountable for their ill actions against the victims of sexually assaulted and wrongfully accused.
I have 28 years of awful experiences at Lafayette College. I have been trying to combat sexually assaulted crimes and fighting against the biases that are somehow ingrained in Lafayette College’s administrative cultures. I would be more than happy to help you with our sad experiences to help you with your very important cause. Let’s not forget, Lafayette College will be a better place when they held their students and educational values equal to all.

Dear Selin, I am with you with all my heart

Kenan, Thank you. Sexual violation and discriminations dice victims into pieces. It’s almost impossible to put the pieces back together. We survivors need all the supports we can get.