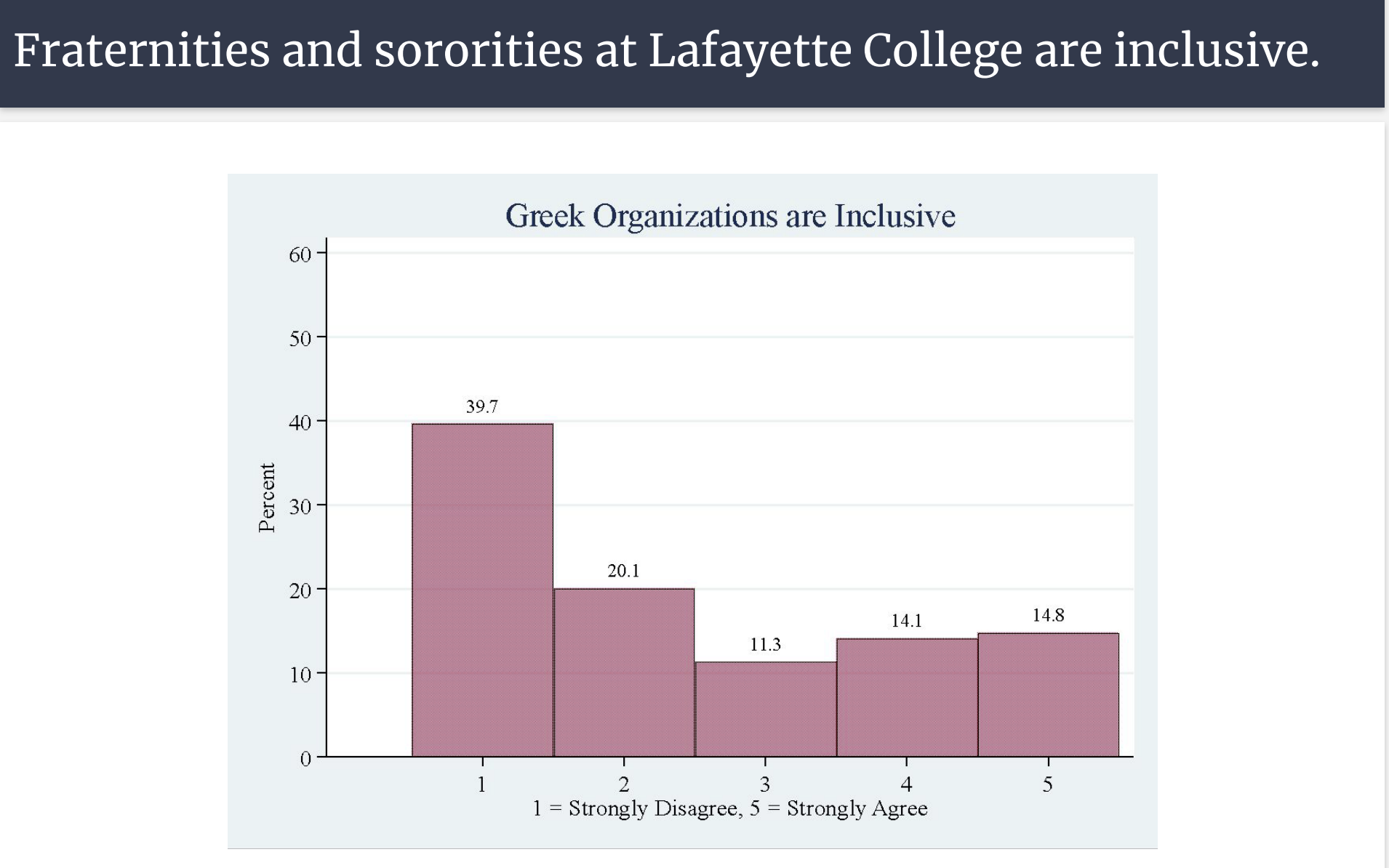 The Greek Life Committee of Student Government presented results of the survey to the campus community on Thursday. (Photo courtesy of GL Committee PowerPoint)

The future of Greek life in the United States hangs in the balance as colleges across the nation struggle to address the ever-growing controversies stemming from these institutions. Universities such as American, Duke, Tufts and Northeastern are currently exploring reform and abolition, according to Vox.

With growing tension on Lafayette’s own campus, Student Government issued a survey to assess student opinion on Greek life in September. The results paint a picture of a campus divided.

Recently, Instagram pages such as @black.at.laf, @anti.violence.laf, and @abolishgreeklifeatlaf have shared posts highlighting accounts of racism, alcohol abuse, sexual misconduct and other issues in the Greek life system. In response to these testimonies and shifting sentiment on campus, Student Government conducted the Greek Life Climate Survey to gain a better understanding of students’ outlook regarding these historic institutions.

“We don’t have a lot of information about the group [Abolish Greek Life]. We don’t know how many students are running it and things like that, so we just want to make sure that we were getting a large enough sample so that our committee can move forward with projects that we think represent the majority of students,” said Lauren Ameruoso ‘22, Director of the Greek Life Committee.

Student Government worked in conjunction with psychology professor John Shaw to create a survey that would best represent the views of the student body. Economics professor David Stifel helped to analyze the responses. Shaw declined a request for comment, while Stifel could not be reached after multiple requests for comment.

“We worked closely with [Shaw] to come up with a list of questions that we thought were unbiased and representative of everybody,” Ameruoso said. “Whether you are in Greek Life or not, we want to make sure that everybody felt like they had a place in the survey.”

The survey garnered responses from 1,191 students and collected 449 open responses. Results were categorized by class year, gender and affiliation status. Surveys were not sent to first-years due to their absence from campus this semester.

The results were hardly unanimous. Many responses reflected polarization between different demographic groups in the carefully constructed study.

The survey featured a total of eight questions, the results of which were shared in the Student Government Greek Life Presentation on Thursday night.

One question in the survey was, “If Greek Life was abolished at Lafayette College, how do you think social life at Lafayette would be affected?”

“The survey results confirm to us that people benefiting from the system are mostly in the system, and most people who view Greek life in a more negative light are not in the system,” Amerouso said. “In the interest of our community, you don’t want anybody to be feeling negative emotions.”

In an effort to foster a culture on campus in which everyone benefits, the Greek Life Committee, along with Student Government, have undertaken a number of initiatives to ensure the results of the survey lead to action.

“We are having a meeting with the Faculty Committee of Student Life on [Nov. 19], we are then meeting with [the] Greek Alumni Board on [Nov. 20],” Ameruoso said. “Bigger conversations are to be had with the rest of alumni, the administration, the rest of the faculty body. In December or January, we will be presenting to the Board of Trustees.”

In addition to assessing outlook on campus, the Greek Life Committee has looked to other institutions to analyze reform.

“We met with schools that have Greek Life, have never had Greek Life, and schools that had an abolish movement, or abolished Greek life in the past. We spoke to students at Bowdoin, Colby, Grinnell, Swarthmore, Vanderbilt, Holy Cross, and a few others,” Ameruoso said.

While the future of Greek life at Lafayette is unclear, the committee is trying to leave no stone unturned in their considerations.

“We wanted to gauge how other schools handled it [reform/abolition], outcomes, what works and what does not work. This way we can envision what the future of Lafayette looks like either with Greek Life, with reforms to Greek Life, the abolishment of Greek Life, we wanted to consider everything,” Ameruoso said.

What people don’t understand about abolishing Greek Like on campus is that it won’t stop any of the problems that students complain about, and wouldn’t likely mean the end of Greek Organizations. I know of 2 strong underground fraternities for Lafayette and a removal of organizations from affiliation with the college would likely push many of the current fraternities and sororities to do the same. The only difference is that there would be no Lafayette oversight into problems that got reported at all. As this seems to be pushed by people who try to explain to me how a larger and more encompassing government is a good thing, how is that not also the case here?

The results of the survey also don’t reflect anything outside of the fact that Greek Life has been a positive experience at the college as well. The author here purposefully chose a negatively looking graph in his piece to sway opinions about this. The actual data instead represents an overwhelming majority of students who are unaffiliated (63.2%, Page 4 of linked data) to those who are (31.6%, Page 4) and yet still proports that Greek Life as a whole has not been a negative to the community (52.1%, Page 35). That’s with a 2-to-1 majority of students not involved with Greek Life. That says something.

Additionally, of the issues highlighted in this specific piece- racism, alcohol abuse, sexual misconduct- also happen outside of Greek organizations as well. As a minority unaffiliated student, I don’t see racism in Greek Life nor do I see it on the campus as a whole. Of course some students may be, that can’t be changed, but the Lafayette community has always been good to me. I’ve even discussed with fraternities about not having the funds to pay dues and they explained how their nationals would help if I kept up good grades. They didn’t not want me because of my race and while I ultimately didn’t rush that was my decision. I wasn’t prevented by some figmental “institutionalized” force of racism against me, and to say so means that my decision didn’t matter anyway. I find that actually racist.

Alcohol abuse is as common on college campuses as students skipping classes because they didn’t finish an assignment. As a freshman and sophomore I found my way into plenty of parties that openly served me alcohol. For that matter, I also found my way into Milo’s and Campus Pizza those years before I turned 21 as well. To pretend that it is a Greek Life problem is to be incredibly ignorant. The same also holds true for sexual misconduct.

Is the system perfect? Of course not, but nothing is. Should there be reform? Likely, yes. However, should we carelessly uproot and dismantle systems in place to provide students with new experiences in college under the guise of social change while not truly doing anything? No. Because those same students will still find each other, party anyway, join underground organizations that have less institutional power over them, and the issues will still be present.