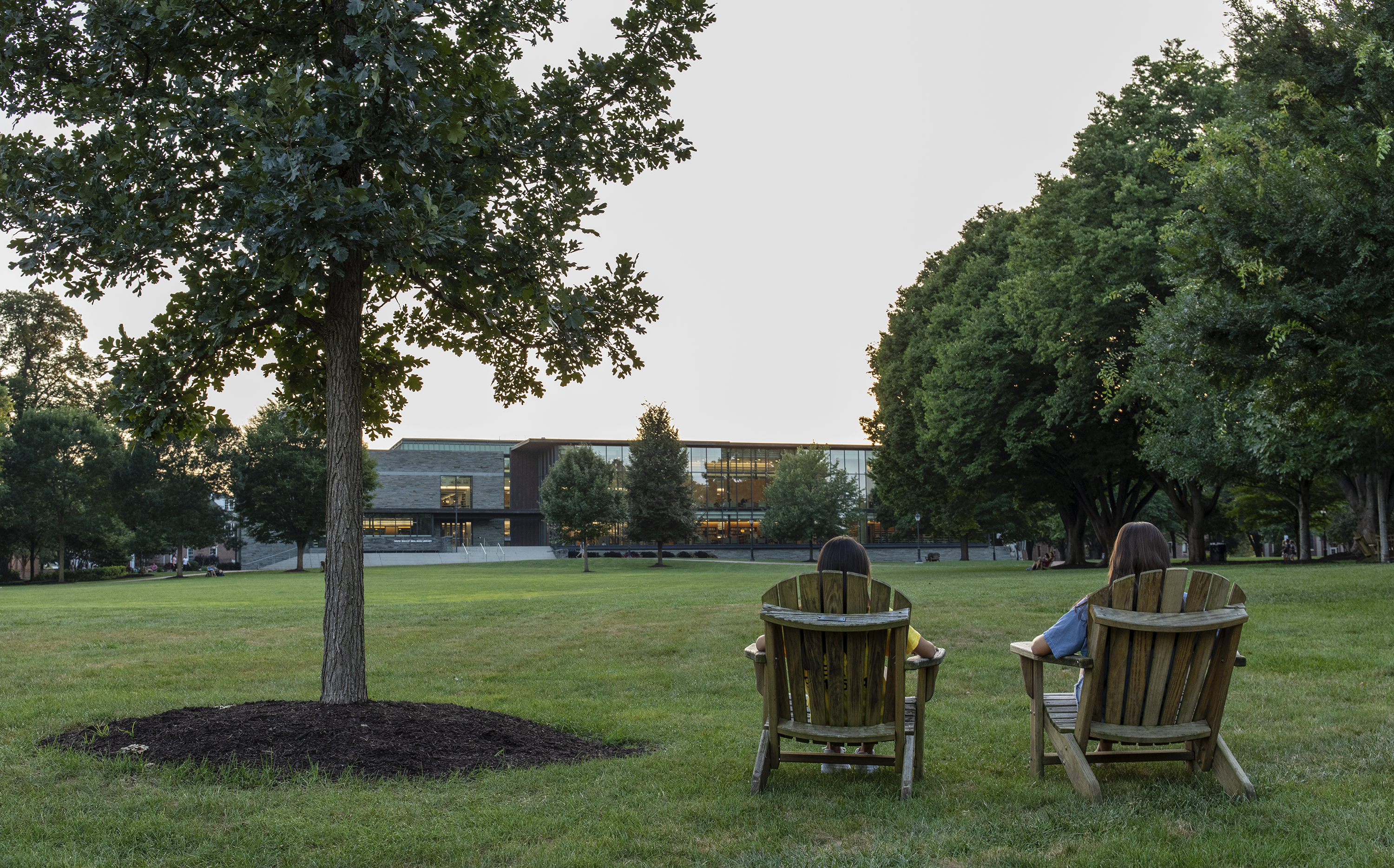 The climate action plan aims to achieve carbon neutrality by 2035 in an ongoing effort to keep Lafayette green. (Photo by Elle Cox ’21)

The Board of Trustees unanimously approved the Lafayette College Climate Action Plan 2.0 last Saturday, thereby committing the college to go carbon neutral by 2035.

Chair of the Board Robert Sell and President Alison Byerly said they were both impressed with the presentation of the plan put on by the Climate Action Plan committee members, and the plan was embraced by the trustees, Sell said. The grounds and buildings committee of the board had reviewed the plan twice previously, but Saturday was the first time the board as a whole saw it.

With the announcement comes the news of Marie Fechik-Kirk leaving the college after arriving in November 2016. She was Lafayette’s first Director of Sustainability. Interim Director of Sustainability and campus energy manager Nick DeSalvo said Fechik-Kirk acted as a the central “hub” for the plan over the last two years. Byerly and DeSalvo said Fechik-Kirk left the college within the last few weeks, as she took a position with another firm.

The 40-page Climate Action Plan outlines the recommended steps for Lafayette to take in order to reach their goal of net-zero carbon emissions by the year 2035. The plan will be reevaluated every five years, and carbon emissions kept track of annually, which is DeSalvo’s job.

Four distinct categories make up the plan: Buildings and Facilities Energy Use, Minimizing Waste, Transportation, and Curricular Integration. These four main subtopics are broken into Phase 1, 2, and 3, which outline recommended projects in the years 2019-2020, 2021-2035, and 2026-2035, respectively.

The Office of Sustainability and The Stone House Group were partners in the Climate Action Plan, Lawrence said.

Stone House completed a comprehensive inspection of the campus and gathering data to recommend a plan of action for the college, according to Managing Principal Larry Eighmy.

“When a client like Lafayette asks us to do a Climate Action Plan, we feel as though this brings all of our disciplines together and allows us to find the right spot between environmental and financial sustainability,” Eighmy said.

“Lafayette is not at the front of the pack in the cohort of institutions,” Eighmy said. “But the plan put in place allows Lafayette to” advance to where other institutions are.

The college’s first foray in climate action was in 2008. In 2011, the college had its first plan.

“Gears got turning when…Weiss signed the President’s Climate Commitment [in 2008], and a group of faculty, staff, and students put together the original Climate Action Plan that was released in 2011,” Lawrence said. “The first Climate Action Plan[‘s]…goals were not as ambitious as this plan that we have just revealed.”

Lawrence explained that the original Climate Action Plan did not specify a date for Lafayette achieving carbon neutrality.

Additionally, The Lafayette reported in 2017 that the college had not been keeping its carbon emissions data in a central location since 2013. The college had also not updated its Climate Action Plan every two years as it had committed to doing with the 2011 plan. Fechik-Kirk saw the college centralize its data in 2017 and upload it to Second Nature, a non-profit dedicated to accelerating climate action. It was then discovered the college had decreased carbon emissions 14.3 percent since 2008.

Sustainability efforts continued when Byerly signed the college onto upholding the Paris Climate Agreement in 2017 to combat climate change, along with other college presidents and mayors. after President Donald Trump pulled out of it.

DeSalvo has been in charge of keeping track of the college’s carbon emissions since 2017.

Second Nature oversees pledges and Climate Plan Commitments by institutions and requires an update on roughly a five-year cycle.

The recommendations in the plan to help achieve carbon neutrality include the installation of solar arrays both on and off campus, achieving carbon neutrality at the Metzgar Field Complex and the establishment of a Green Revolving Fund.

Lafayette is currently in conversation with local Lehigh Valley institutions, including Lehigh and Muhlenberg, Lawrence explained. Lafayette plans to enter into a purchase power agreement with these institutions through the company ConsumerFirst Renewables.

The intended purpose of the agreement with any renewable provider is that they agree to purchase electricity from an array that these institutions would install. Lawrence explained that this strategy to reducing an institutions carbon footprint has been effectively implemented with a number of similar institutions.

DeSalvo said that the renewable provider will likely be solar power, since it is more feasible to implement in the geographical area of eastern Pennsylvania.

“We imagine partnering with those same institutions in another…project, which is reforestation.” Lawrence said. “Basically, re-growing forests to store carbon in vegetation and trees.”

Lawrence said students are likely to see reforestation at the Metzgar Complex as one aspect outlined in the plan to make Metzgar self-sufficiently carbon neutral. Trees will act as a “carbon sink” to offset the carbon emissions at the complex.

“We are imagining that Metzgar will be this living laboratory of carbon neutrality for students.” Lawrence said.

“A number of different sites have been proposed, one of them is on top of Kirby Sports Center. That should be a very visual demonstration of a commitment to sustainability and carbon neutrality.” Lawrence said.

Another important aspect of the Climate Action Plan is the establishment of the Green Revolving Fund. The plan outlines $1.8 million to be invested in with an estimated four-year payback period, with money going back into sustainability projects.

“High return energy projects can provide the seed money to begin to make other investments that may not pay back as much. There is [$1.8 million] of high return projects that are going to return 25 percent.” Eighmy explained.

DeSalvo said he is unsure when the $1.8 million will be able to be used and how, as of Wednesday. “How fast we can spend it is something that is to be determined,” he added, and the logistics of projects are being organized.

DeSalvo said the college will be focusing on the efficiency of Hugel Science Center’s fume hoods which constantly bring in air and use a lot of energy. Using more efficient lighting in buildings will also be a focus, he added. Lawrence said these kinds of projects will save the college money.

“I think one of the biggest advantages is that it can allow us the space and clarity to pursue environmental work on a variety of fronts,” Cohen stated.

“On the whole we are seeking to help teach students to live with an environmental balance,” Lawrence said.

“At a time when the need to confront climate change has never been clearer, I am enormously proud that Lafayette College is strengthening its longstanding commitment to sustainability through this plan,” Byerly wrote in her email announcement of the plan.

Marie Fechik-Kirk did not return a request for comment in time for print.