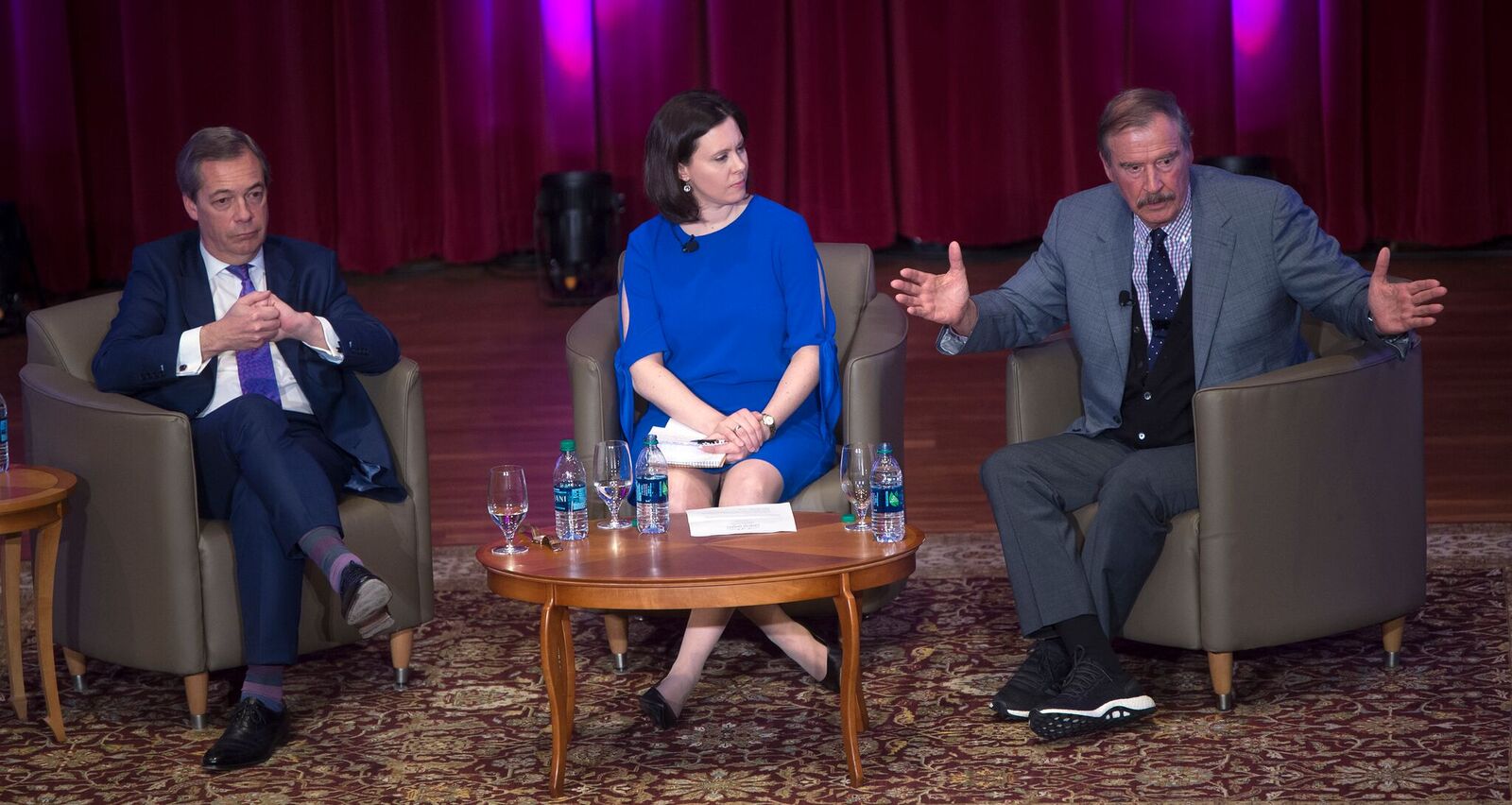 As part of the Lafayette Symposium, Nigel Farage and Vicente Fox debated on April 6 in Colton Chapel on the merits of nationalism versus globalism. (Photo Courtesy of Lafayette Communications).

In the weeks leading up to the debate between Nigel Farage and Vicente Fox, controversy brewed. Students, faculty and alumni expressed their concerns that what they see as Farage’s bigoted views did not align with the college’s values and created an unsafe environment for students of marginalized identities.

Against the backdrop of this contentious lead-up, Byerly began the event with remarks addressing the tensions.

“This event does not simply present opposing views. It’s also, as you may have seen in the community over the last couple weeks, generated opposing views on campus about the wisdom of holding the event at all,” she said.

Student leaders of marginalized groups and faculty members had met with the administration to express why they thought Farage shouldn’t be hosted due to what they saw as his bigotry. The Lafayette received four op-eds which addressed the issue in the last three editions, three against the event and one for. A fact-checking system for speakers at the college was set up by students and faculty who were in the library sifting through the claims of each speaker during the debate.

“For something to be educational, it may not be exemplary,” Byerly said in her remarks. “Much of what we learn in an academic setting is learned not with affirmation but from critique.” She urged the audience to “apply critical analysis” to the speakers, the moderator’s ability to be a “neutral facilitator” and “the framing and the presentation of the event itself.”

Mary Kissel, moderator of the debate and member of the Wall Street Journal editorial board, addressed the fact-checkers of the event.

“To our fact checkers, you should know I am a member of the Wall Street Journal editorial board, not just the Wall Street Journal. We stand for free markets, and free people. And we have had a consistent philosophical view for more than 100 years,” she said, “just in case you want to check what the moderator’s bias is.”

With these remarks, the moderated discussion between Farage—the former leader of the United Kingdom Independence Party and architect of Brexit—and Fox—former president of Mexico—began Friday night in Colton Chapel. Some students walked in unaware of the context surrounding it. Others knew of it, but wanted to go. The audience was a mix including students, alumni, faculty and members of the administration.

Fox’s opening statement in the debate was the story of his grandfather’s immigration to Mexico from the U.S. He spoke of increasing income and standard of living which has taken place in an era of globalization, and that now “some groups are questioning if that was the right way to go, and if we should now go back to isolation, to building walls, to enclosing ourselves within our country.”

Following this, Farage stood for his opening remarks, and began talking not about nationalism and the rights of the nation-state, but of the importance of free speech without demonizing the opposition.

In the US and elsewhere, he said, “we see the creation of safe spaces…of a view on one side of the debate that the others shouldn’t even be entitled to hold that opinion, let alone share it with anybody else. This is bad, and it’s dangerous, the whole point of democracy is that you should be able to argue things fiercely, disagree with each other, but you don’t actually have to dislike and hate each other, because in a free world, you can respect the fact that somebody else has a different opinion.”

“President Fox and I have barely punched each other all week,” Farage said, eliciting chuckles from the audience and Fox.

As for his views on nationalism, Farage emphasized that he believes in the right of the nation-state and the people elected in it to make their own laws. He distanced himself from the term “nationalist,” using instead the term “nationist.”

“The students in colleges around the west who want to shout down and stop people like me from speaking, frankly, have become pawns of big money and big power and they need to rethink things,” he added.

Farage said that he pushed for Brexit because the people who make laws for the EU are not elected by the British citizens, their tariffs are injurious to British trade and the open door policy of immigration makes difficult “assimilation and cohesion in society.”

He added that he stepped down from leadership in Brexit because he felt as if it was best to go out on top—he had done what he set out to accomplish with UKIP.

Daniel Gonzalez ‘19 questioned the notion that Farage’s job was done.

“The thing that shocked me the most is Farage saying, ‘Brexit was voted, and I left,’” he said. “Like…you’re not done. Brexit is not done. Sure, [it] was voted for, but there are so many things—the borders with Northern Ireland, how you’re going to trade in the Eurozone, 1.3 million British citizens” still living in the European Union.

Gonzalez added that he really enjoyed the debate and that he thought it was necessary.

Abdul Manan ‘18, co-founder of the Mill Series, agreed with Gonzalez that it was a surprising statement from Farage.

“It’s a little absurd. You fight for all this while, and then you just quit,” he said.

“As far as the debate goes, I think it was valuable. There were parts I disagreed with on both, sometimes it strayed a little off-topic, I felt,” Manan said. “Overall, I learned quite a bit about Brexit.”

Fox addressed Trump’s comments on the migrant caravan that has been traveling from Central America and heading north.

LaFact, the group fact checking the event, verified Fox’s claim as true using a New York Times article on the matter. Trump had said that women were being raped “at levels no one has ever seen before” even though “caravan organizers and participants said they had heard of no such allegations in the 11 days since they began their northward march,” the article said.

Sarah Burket ‘21 walked into the debate not being aware of the controversy surrounding, but she said she gained a better understanding of nationalism.

“I thought I would come in here just supporting globalism, but there were some points about nationalism that I could kind of understand, on the [economic] level, not based on immigrants,” she said.

Eva Appelo ‘21 agreed that both sides had good points.

The debate was the last stop on the Campus Liberty Tour, during which the two political figures debated at 3 other schools, sponsored by the Steamboat Institute. The CEO, Jennifer Schubert-Akin, referred to the organization as “non-partisan” in her opening remarks. Byerly said in an interview that it is fair to call the organization conservative.

Schubert-Akin thanked Byerly, the symposium and government and law professor Brandon Van Dyck, co-founder of the Mill Series in her opening remarks for bringing the event to the attention of the college, for introducing idea to Byerly.

Van Dyck said he learned a lot of interesting facts from both speakers.

“I wish that doing events like this didn’t cause so much negative reaction,” he said. “I think they both represent viewpoints that are pretty influential in the world. Colleges should be a place where [those viewpoints] are welcomed, and not slurred, in my opinion.”

Van Dyck has not responded for comment on in what way he viewed the speakers as “slurred.” Community members have criticized Farage over the last few weeks as being bigoted, anti-Semitic and xenophobic.