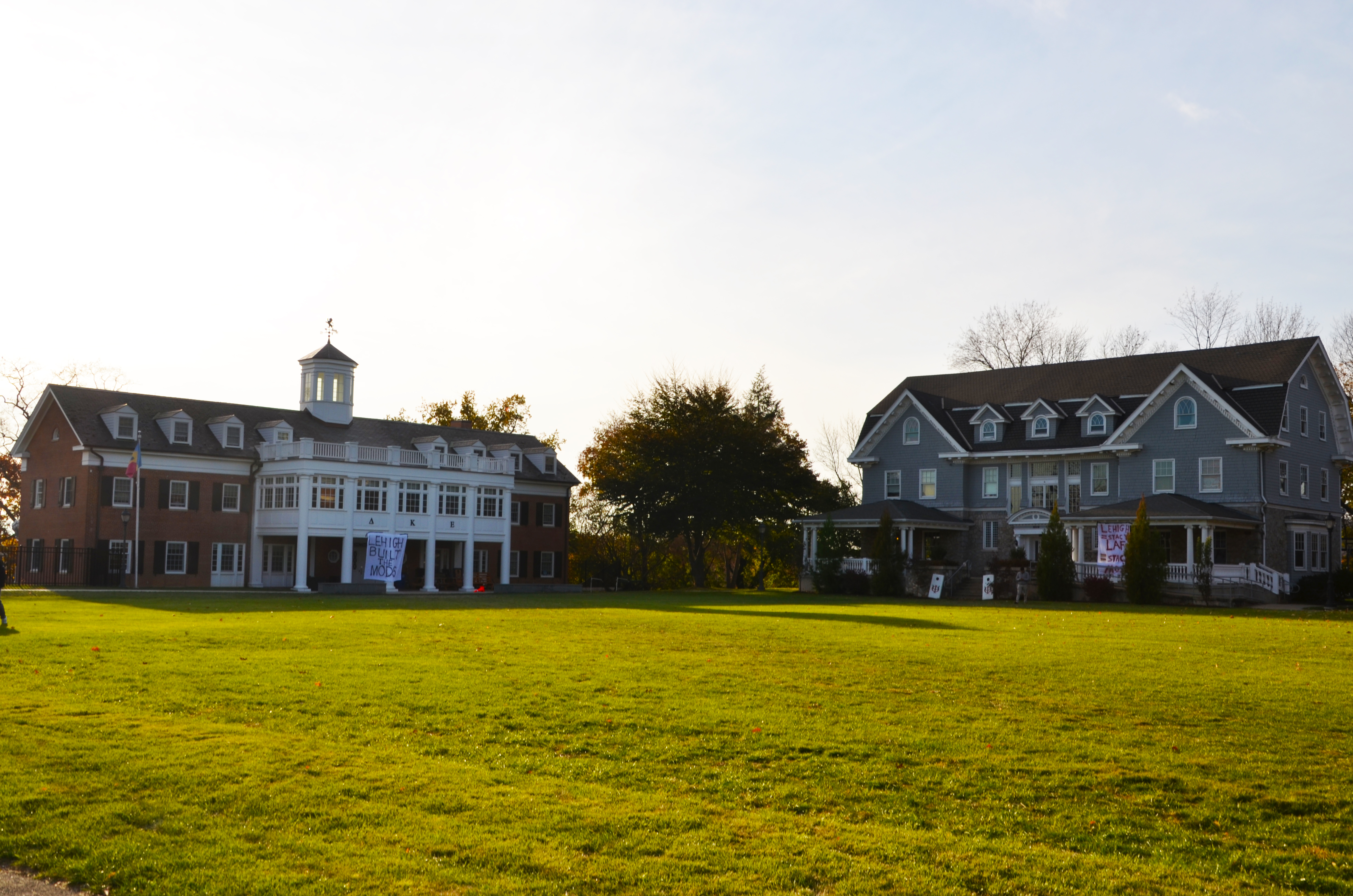 March Field is home to two of the five chartered fraternities on campus. (Photo by Maddie Costello ’21)

As these schools consider shutting Greek life down, Lafayette is keeping the door open.

Last year, Delta Tau Delta earned chapter status. This year, Chi Phi has begun work as a colony and Zeta Psi is working on putting together their first class after their five year suspension. Chi Phi intends to go before the college’s Recognition Committee later this month to determine its achievement of full chapter status, and Zeta Psi intends to be a fully functional group with its members already active when its five-year suspension term is over in November 2018.

Advisor to fraternities and sororities Dan Ayala wrote in an email that Lafayette students do not have as much to worry about when it comes to hazing and other risky behaviors often associated with Greek life. According to Ayala, the biggest complaints about Greek life on campus are about dues payments and time commitments.

President of the Panhellenic Council Jane Gibbons ‘18 said that Greek societies here are often characterized as taking part in problematic behaviors such as heavy drinking, but she calls this view “deeply rooted in misconceptions.”

Recently, a climate survey of Greek organizations at Lafayette was conducted by Dyad Strategies to show how students who have gone Greek feel about the community based on questions surrounding “10 critical factors, among other things, attitudes on hazing tolerance, conformity, social status, and unethical decision making,” Ayala wrote. CEO of Dyad Strategies Gentry McCreary met with individual chapters to discuss their survey results, and then Greek life as a whole to give a talk on why hazing occurs in exclusive organizations such as in Greek life.

At the all-Greek meeting, McCreary spoke of so-called hazing traditions being developed over time within organizations whose founders did not envision such a culture. He talked about how other types of organizations haze, like marching bands and sports teams, but none are killing members at the same rate as Greek life organizations, particularly fraternities.

Vice President of Campus Life Annette Diorio wrote in an email that the college is “mindful of the need for programming and training regarding alcohol and other risk management issues as we add more recognized chapters on campus. [The college’s] social events policy is in line with national best practices.” She added that the college was fortunate to be able to bring McCreary to campus to work with fraternities and sororities.

While the results are still being analyzed, Ayala wrote the survey suggested that Lafayette’s Greek life is seen by its members as “well below the national norm on the vast majority of these key measures and…at or above the norm on topics like commitment, support, and a sense of ‘brotherhood/sisterhood.’”

The National Study of Student Hazing in 2008 found that 55 percent of college students involved in clubs, teams, and organizations, including Greek organizations, experience hazing. Additionally, of those students who classify their experiences as hazing, 95 percent said they did not report the events to campus officials.

Lafayette fraternities and sororities have strict anti-hazing rules, and there are pathways to go about reporting any breaches of these policies, Ayala wrote. The protocol at Lafayette is “to address problematic behavior…through documenting an incident with Public Safety and to loop in the appropriate personnel to determine whether to open an investigation. This is a collaborative effort with Public Safety, The Office of Student Conduct, and other offices, depending on the nature of the report.”

Gibbons said that she is not aware of incidents of hazing in Lafayette sororities during her tenure here, but said that the Panhellenic Council holds events educating on the dangers of hazing to “make sure such incidents do not occur at Lafayette.”

The survey summary stated that reports of hazing had been received in different ways.

“Campus administrators do report receiving anonymous reports of hazing from parents and students and some respondents to the web survey reported having experienced or witnessed hazing,” the summary stated.

In 2012, freshman Everett Glenn died after drinking heavily. Then-college president Dan Weiss told The Lafayette that there was “clear circumstantial evidence” that he had been drinking at a recruiting event for the underground fraternity Kappa Delta Rho who had their charter revoked the year prior. In 2013, Zeta Psi was removed from campus for five years for alcohol violations.

The 2011 survey addressed issues such as the “wellness of our students…alcohol and substance abuse…hazing, sexual misconduct, and behaviors related to general incivility.”