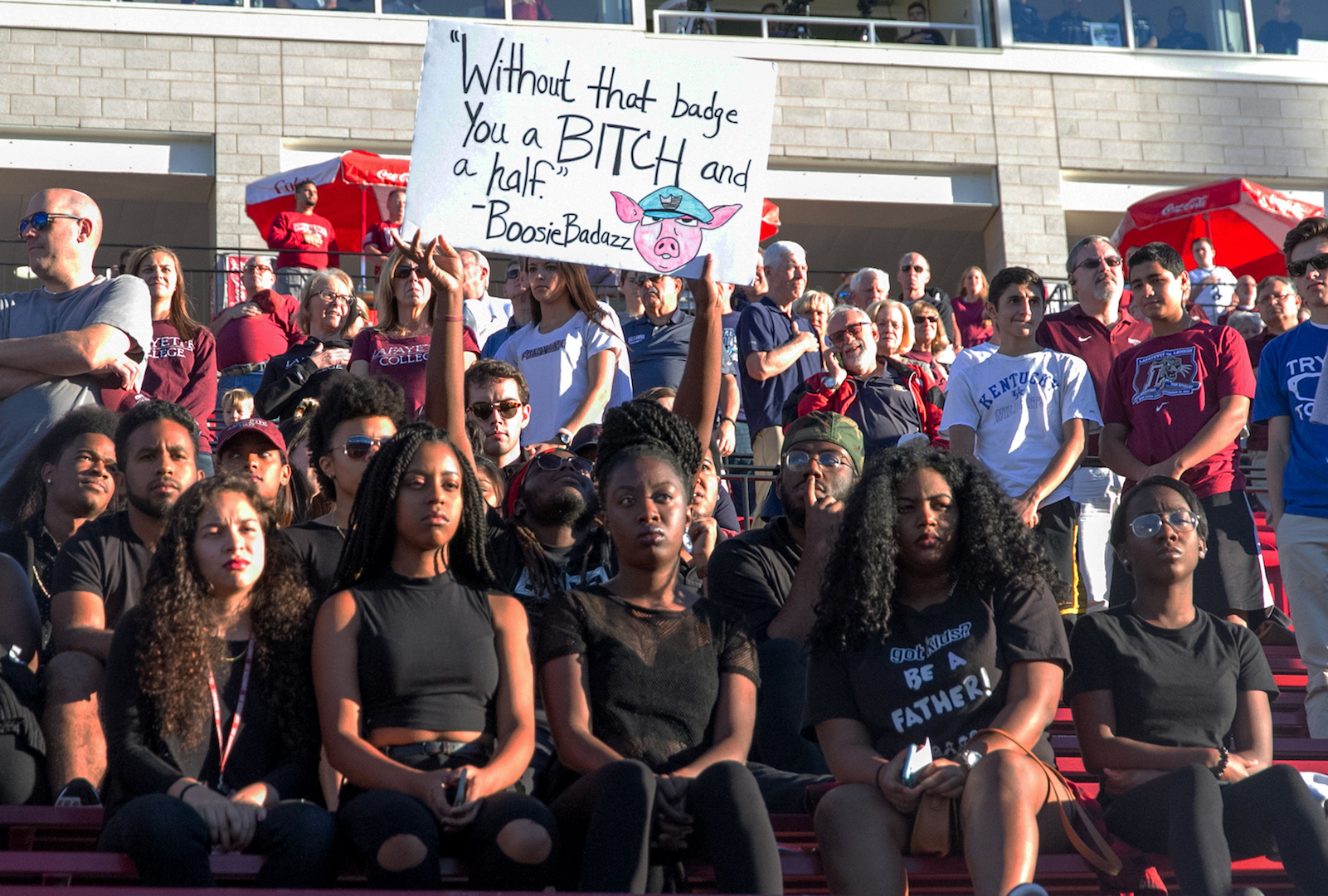 As families tailgated on the Markle Parking Deck Saturday for the Family Weekend football game, more than 50 students dressed in all black stood outside of Oechsle Hall, blasting music like James Brown’s “Say It Loud – I’m Black and I’m Proud” and Gil Scott-Heron’s “The Revolution Will Not Be Televised.”

Charles Evans ’19, Khadijah Akeem ’19 and Jovante Anderson ’19 were among the students. With Akeem close to the front, the group entered Fisher Stadium in a two-column line, walked into the stands and sat.

Holding signs that read, “Black Lives Matter,” “By Any Means” and “‘Without that badge you a BITCH and a half.’ – Boosie Badazz” they stayed seated during the national anthem to protest police brutality and racism in America and at Lafayette. Roughly half of that group stayed for the rest of the game and remained seated, Evans said.

It was Akeem’s and Anderson’s first time protesting. Evans said he had protested in high school and over the summer in Washington, D.C. But Akeem, Anderson and Evans all plan to continue demonstrating to raise awareness about the way people of color are treated in the U.S.

There are scheduled sit-ins in Upper and Lower Farinon Thursday evening and Friday afternoon, respectively. Evans said that he and others plan to remain seated during the national anthem at the homecoming football game this weekend and during Laf-Lehigh.

Evans said a group of demonstrators, which includes faculty, planned to dress in all black and sit and do homework from 5 p.m. to 6 p.m. in Upper on Thursday. Then, for the next hour, they planned to play music and perform poetry in the dining hall. Evans said the group also plans to do something similar in Lower from 12 p.m. to 1 p.m. on Friday.

“To be black in America is to be uncomfortable all the time,” said Evans, who is black. By protesting, he said, he wants others to feel a similar discomfort and confront racial issues that they may be able to ignore otherwise.

Anderson and Akeem said they also feel a similar sense of discomfort on campus. When talking about race in his classes, Anderson said that when students say “problematic things” he feels burdened to defend not only himself, but also his race.

As a black Jamaican international student, he said he did not have to deal with these issues until he came to Lafayette.

“For the first time, I think I felt like a minority on this campus,” said Anderson, adding that he now feels like he has to worry about whether he’s wearing a hoodie when he goes out at night or if he’s being respectful when talking to public safety.

He also said that the lack of activism on the part of his white peers on this campus frustrates him, and the way he has heard students talk about issues of diversity has at times made him feel marginalized.

Because she is a black, Muslim woman on campus, Akeem said she also feels like she constantly needs to think about how she is representing herself.

“It’s more of just having to mindful of who I am 24/7 on this campus because I am not a white female,” Akeem said. She said that raising awareness is bringing her one step closer to forgetting about that constant mindfulness. Evans echoed that feeling.

“Coming to this college, I knew what I was going to face,” he said. “When you come to a predominantly white institution and you have, at times, had to cling to your culture, because, if you don’t, you’re just going to just walk around miserable, it puts you in a head space to the point where you feel like it’s a necessity to protest.”

At the game on Family Weekend, Evans said the group was met with some backlash while protesting.

When the national anthem started, Evans said he heard someone demand that they stand up. Others sitting around him said side-comments like “shame” and “disgraceful,” Evans said. Anderson said he does not remember this, but added that he was nervous protesting and may not have heard.

Akeem said she also didn’t hear anyone say anything to her directly, besides an elderly white male stadium worker who dismissively told her to move seats, “abruptly, and I know he wouldn’t have done that if I was a white person.”

As he was leaving, Evans said that a couple people shook his hand and gave him positive feedback, but “for the most part, people just kind of steered clear.”

He said he feels the protest was successful, and that there will be more to come.

“There’s still people on this campus who can’t even fathom racism in this country,” he said. “So until people can start to open up their eyes and their ears, we’re just going to put it in their face as much as we can.”

The demonstration at the football game comes after San Francisco 49ers player Colin Kaepernick began sitting during the national anthem in August to protest discrimination against people of color in the United States, which garnered national attention. He has continued to kneel during the anthem at every game following that. Several other athletes, including Miami Dolphins player Arian Foster, Seattle Seahawks player Jeremy Lane and Denver Broncos player Brandon Marshall, have joined him.

Some have criticized Kaepernick, saying his actions are anti-American and that he is disrespecting the U.S. military.

But Evans said Saturday’s protest is not specifically to join Kaepernick, but the football stadium is just the outlet they choose to use to raise awareness.

Lafayette students are not the first to protest at football games as part of this movement. Students at Southern Methodist University kneeled during the national anthem at the Mustangs’ game on Sept. 23, and many other college and high school teams have protested during football games.

Correction: In a previous version of this article, Khadijah Akeem’s first name was spelt wrong. The article has been edited with the correct spelling.

If these students hate white people and Lafayette so much, I can’t begin to imagine how hard it is to get a free education at a premier academic institution solely because you’re not white. You either have to be ignorant or dumb to think that a non-white student at a preppy northeastern school isn’t going to be in the minority. Did you research this school at all before deciding to attend or just grab the free ride? At some point, these petulant children need to stop playing the victim card about everything. Withiut the term microaggression (which is a made up word), the students in this article would still be a bitch and a half. This article is a prime example of how Obama’s legacy is an eight year march towards a race war while destroying the world’s final superpower.

While I am sympathetic to the message that these students are delivering, I was shocked and dismayed to see the sign that was hanging in Farinon during Parents Weekend (and presumably before and thereafter) that cited “Black lives lost as a result of interactions with police”. This list included the ISIS sympathizer who stabbed nine people in Minn, a man who shot five people in PA (including two cops), a man shot while stabbing his girlfriend (who thanked cops for saving her life), a man who shot a cop after a robbery in Atlantic City before being shot in return, and others who hardly deserve our sympathy. Including these people with others whose death was more controversial is misleading, misguided, and cheapens the message that the group is delivering.