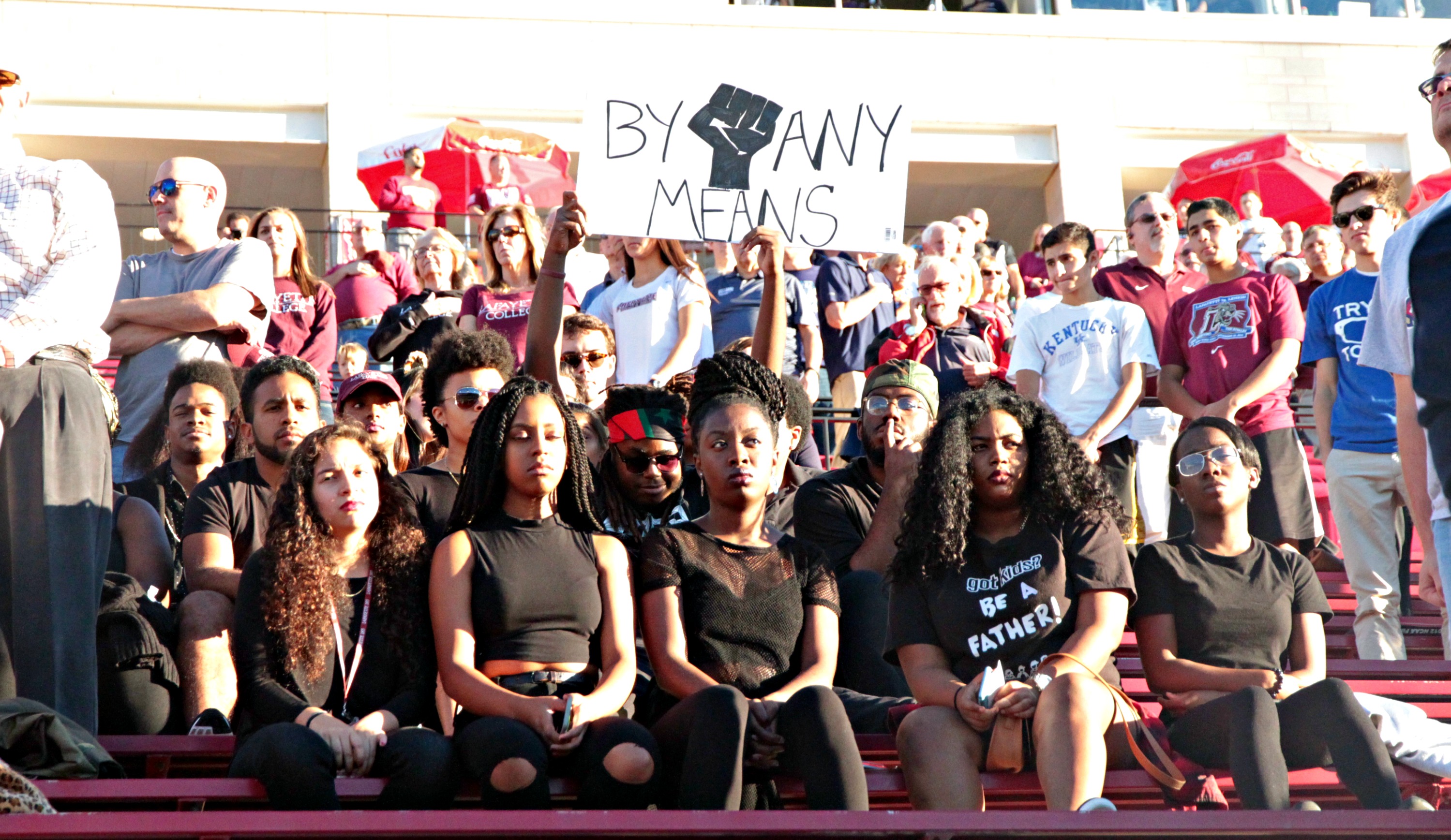 Over 50 students remained seated during the national anthem at the Villanova-Lafayette game Saturday during Family Weekend to protest police brutality and racism in America and at Lafayette College.

The students were dressed in black and held signs reading “#BlackLivesMatter” and “By Any Means.” They plan to sit for the entire game, according to Charles Evans ’19, one of the main organizers of the demonstration.

Evans said the purpose of the move was to raise awareness about the way people of color are treated in the United States and to protest the lack of recognition of these issues.

This comes after San Francisco 49ers player Colin Kaepernick began sitting during the national anthem in August to protest discrimination against people of color in the United States, which garnered national attention. He has continued to kneel during the anthem at every game following that. Several other athletes, including Miami Dolphins player Arian Foster, Seattle Seahawks player Jeremy Lane and Denver Broncos player Brandon Marshall, have joined him.

Some have criticized Kaepernick, saying his actions are anti-American.

But Evans said Saturday’s protest is not specifically to join Kaepernick, but the football stadium is just the outlet they choose to use to raise awareness.

“To be black in America is to be uncomfortable all the time,” said Evans, who is black. He said he wants others to understand that discomfort, and protesting during Family Weekend is no coincidence.

“Protesting is a way to make people uncomfortable, and for that split second or for that however extended period of time, they can be put in our shoes, and they have to see things from our perspective,” Evans said.

“So doing it for Family Weekend,” he added, “with all these people who are coming from a place where they have the ability to turn a blind eye to everything that’s going on in this country – whether it be because of their privilege, their white privilege or just the fact that they choose to disregard racism – having all these people’s parents here, too, as well as the people on this campus that are doing that, just sends a much bigger message.”

He said he is unafraid of any repercussions from the protest.

There has also been organization by black students off the field. Evans said he blasts conscious rap and R&B wherever he goes on campus, and others are writing “BlackLivesMatter” on door signs and, in general, being “unapologetically black.”

Evans said he was told that a fellow student wrote “BlackLivesMatter” on a whiteboard outside on his door and it was wiped off. It’s microagressions like that, Evans said, that leads him to believe racism is real at the college and that there’s a lack of recognition of the way people of color are treated in the U.S., even as police shootings of black Americans continue.

“There’s still people on this campus who can’t even fathom racism in this country,” he said. “So until people can start to open up their eyes and their ears, we’re just going to put it in their face as much as we can.”

Lafayette students are not the first to protest at football games as part of this movement. Students at Southern Methodist University kneeled during the national anthem at the Mustangs’ game on Friday, and many other college and high school teams have protested during football games.

Evans said a group of students also plan to remain seated during the national anthem at the Laf-Lehigh game as well.

Protest is right of every citizen

A disgrace to every American Veteran and Military and not to mention the country !!!!!! Sick People