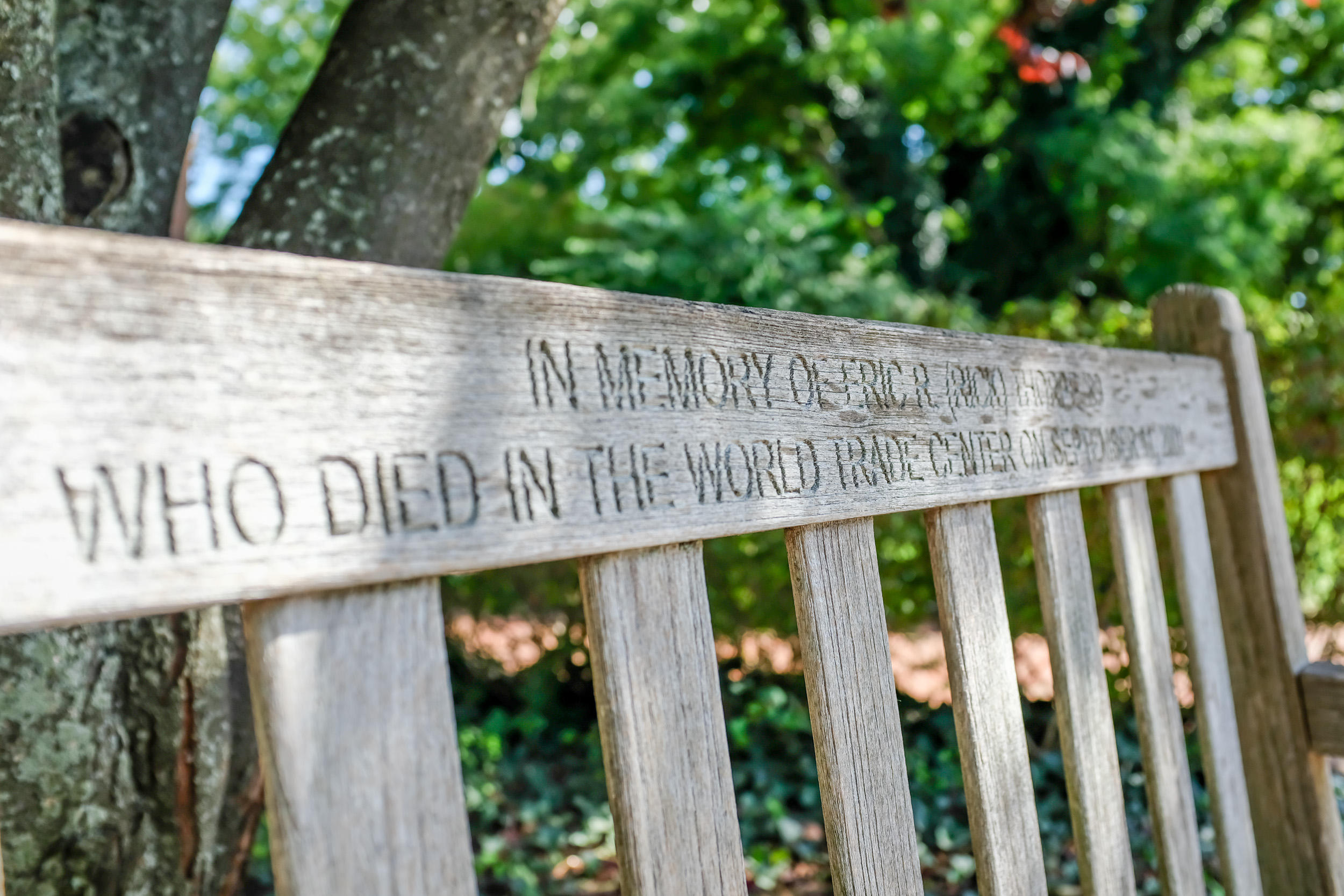 This bench, placed next to Kirby House on campus, remembers Eric “Rick” Thorpe ’89 who passed away in the World Trade Center on 9/11. (Photo by Caroline Burns ’22)

Government and law professor Joshua Miller was about to start class on the morning of Sept. 11, 2001.

“I remember coming into a 9:30 a.m. class, and the students asked if we could turn on the TV…They had heard that a plane hit the World Trade Center,” Miller said. “I’m thinking a little plane somehow broke a few windows, so I told them no, we have important work to do talking about Plato.”

Students and faculty gathered in various places across campus to watch the events unfold.

“I was in the South College dorm,” Dr. Jeff Weinstein ‘02, Editor-in-Chief of The Lafayette at the time of the attacks, said. “I remember it being on folks’ televisions in their various dorm rooms, and people were gathered in the lounge watching, which was where I was seeing it. I spent most of the day in the dorms watching the TV.”

“I wound up in the basement of Kirby Hall after class, and there were probably ten people watching [the TV] in there,” Miller said.

Both Miller and Weinstein recalled the chaos and uncertainty of the day.

“It was such a scary time because you just didn’t know,” Miller said. “There were four planes, so you didn’t know. Is someone going to come here? Probably not, but what is the extent of this?”

“There was just a frantic rush for people who had parents or loved ones that were in New York to get in touch with them, and there were people who knew people who were there,” Weinstein said. “And so the day was all about trying to determine if they were okay or not.”

Weinstein emphasized how many members of the community were affected by the events.

“Everybody had a connection, either directly or through a cousin, friend, uncle or parent. Everyone was connected to it somehow,” Weinstein said.

“It started to come out over the next few days who knew someone who had died, and there was even a recent Lafayette alum who died,” Miller said.

Eric “Rick” Thorpe ‘89 died in the World Trade Center during the attacks. There is a bench commemorating Thorpe on the college’s campus between Kirby House and the David Bishop Skillman Library.

According to Miller, student responses ranged from sadness to confusion to anger.

“A student said something like, ‘We should wipe out Lebanon.’ And this had nothing to do with anything in Lebanon, he just wanted to wipe out something,” Miller said. “There was sort of this feeling of ‘we’ve got to do something, what are we going to do?’”

“This one student had a blindly violent reaction, and I’m sure there were others who felt similarly, but for the most part, there was just intense sorrow,” he added. “We were upset, we were on edge.”

Weinstein agreed that the Lafayette community’s response was more of surprise than violence.

“There was not a lot of hostility,” Weinstein said. “I don’t remember any protest or demand for a response from the student body itself. I think it was really more shock.”

According to Weinstein, the editorial board of The Lafayette had to make a decision about how to cover the events in the student newspaper.

“We really felt at The Lafayette that we wanted to cover things that were interesting, things that we could add to that you couldn’t find other places, unique content that was relevant to the student body,” Weinstein said.

In a “From the Editor’s Desk…” note from the September 14th, 2001 issue of The Lafayette, Weinstein wrote, “I am of the philosophy that if another news organization ​​has a better vantage point, more information and is more capable of disseminating that information, reiterating that news is not productive.”

Because The Lafayette is a weekly publication, the newspaper faced another challenge: an inability to consistently report on the constant updates coming in about the attacks.

“We didn’t really have an online presence, and publishing something that requires hourly updates on a weekly schedule was just not going to be tenable,” Weinstein said. “There was also a lot of misinformation going around, and we didn’t want to print anything we would have to retract or anything that we couldn’t be sure was true.”

In the weeks following the attacks, The Lafayette covered events surrounding the attacks’ aftermath, such as a candlelight vigil held on campus and the Patriot League’s decision to cancel games in the wake of the tragedy.

The newspaper also continued to cover other events occurring on and around campus. Weinstein recalled the Lafayette community’s reaction to this decision as largely positive.

“I think people were looking for a little bit of an escape or something else to focus on,” Weinstein said. “I don’t remember there being any dissension from the board members or negative reaction. There were practical reasons, emotional reasons [to report on other events] and the issue of journalistic integrity.”

According to Miller, the attacks represented a turning point in America’s perception of itself.

“There was a new sense of vulnerability in the United States,” Miller said. “There’s an Abraham Lincoln speech where he said that America might collapse from the inside, but no one dares to touch from the outside. This changed that.”

“These are things that sort of test our resolve and our nation, and become an indelible mark on the entire country, including our educational institutions,” Weinstein said. “It’ll definitely be a mark in Lafayette history.”