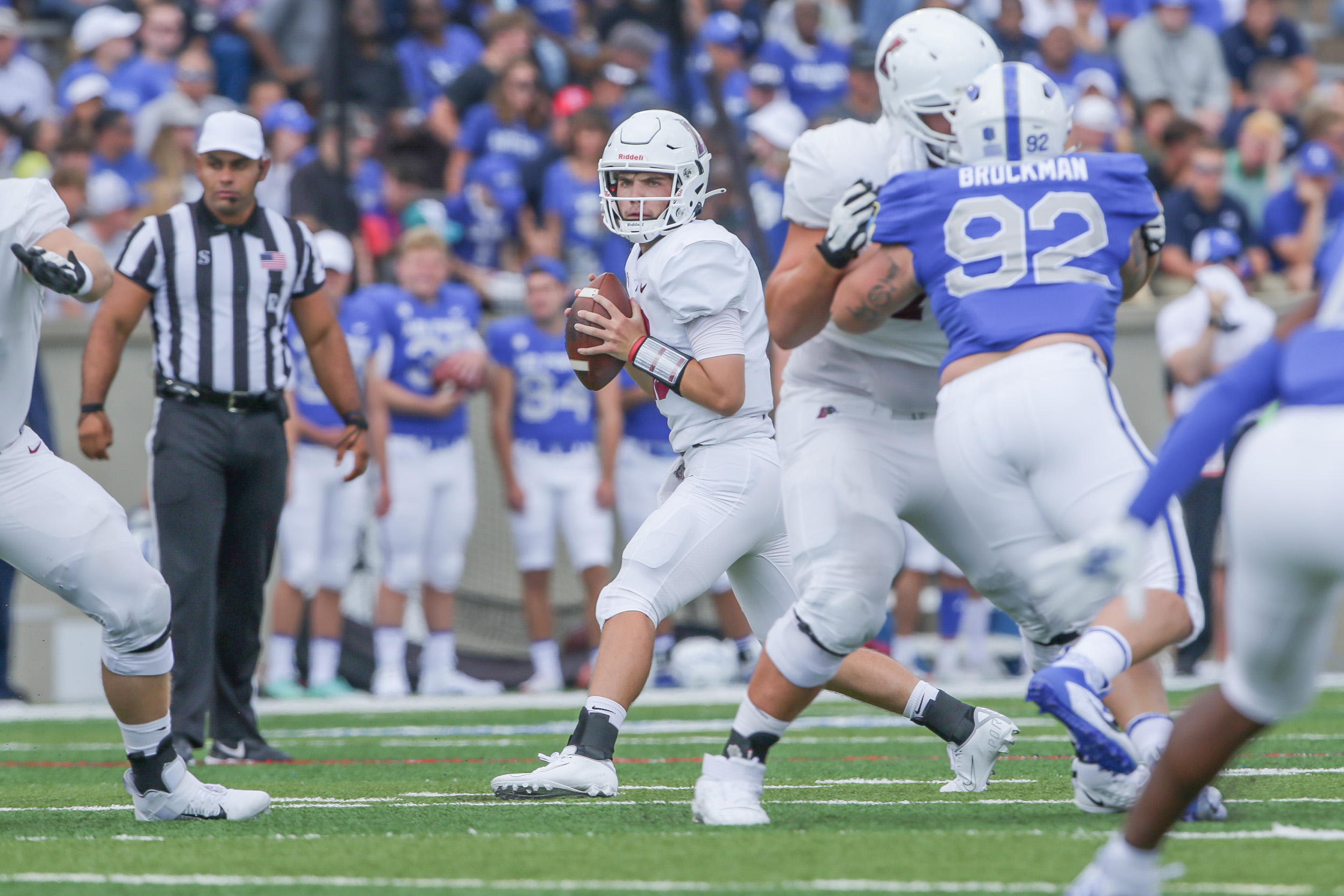 The Lafayette football team opens up their season with a hard game against the United States Air Force Academy (31-14). (Photo courtesy of Athletic Communications)

The Leopards were dominated by a strong Air Force run game this past Saturday, opening their season against the United States Air Force Academy with a 35-14 loss. Despite the 21 point defeat, Lafayette had a strong showing against the NCAA Division I Football Bowl Subdivision (FBS) Falcons. And for the first time in over a year, the Leopards had a chance to play in front of a crowd.

The Leopards struggled against the Falcons dominant run game, which led the nation in rushing in 2020. The Leopards gave up 370 yards on the ground and the Falcons ran a total of five passing plays.

The Falcons jumped out in front with two first quarter touchdowns to lead 0-14 heading into the second quarter. Falcons quarterback Haaziq Daniels ’23, who was more effective running than throwing, scored the first touchdown on the ground for Air Force. Daniels totaled 72 yards on 19 carries along with three touchdowns in the game.

The Leopards got on the board in the second quarter with an impressive drive that included a 3rd-and-7 conversion and a 4th-and-11 conversion. The drive ended with sophomore quarterback Rent Montie tossing a 23-yard score to junior wideout Julius Young.

“It was awesome playing in front of 30,000 fans,” Young said. “In the spring, we really didn’t get to have fans in the stadium. Going from basically no fans to 30,000 loud cheering people at Air Force was incredible. It was a great feeling to be able to compete in that environment.”

Young went on to snag nine catches for a total of 146 yards and a touchdown. The deep threat averaged 16.2 yards per catch. This performance was a career high in yards for Young and he will look to build off of game one and continue to improve each and every week.

“Coach Garrett really had a good scheme set up for us prior to the game,” Young said. “I was able to make plays and contribute on offense thanks to a solid performance by the offensive line. They really did a good job keeping the line of scrimmage clean so we can really throw the ball down field and make plays.”

The Falcons responded to the Leopards by adding a score with 3:09 left in the half to push their lead to 20-7. The Leopards did themselves no favors by going three-and-out  and punting from their own end zone. The Falcons capitalized by scoring once more before the half ended, pushing the score to 28-7.

The Leopards began the second half with a wave of momentum, forcing the Falcons to go three-and-out and scoring on the following drive. The drive was led by sophomore quarterback Aaron Angelos who finished the game completing 10 passes for 159 yards. Senior captain running back Selwyn Simpson punched the ball into the end zone to cut the deficit to 14.

The game was at a stalemate until the fourth quarter when the Falcons iced the game with six minutes remaining. Daniels scored his third rushing touchdown to the final score of 35-14.

After the game, Young felt as if there were some positives the team can build off of but also many parts of their game that could be improved. The Leopards will look to bounce back with a win this Saturday at William & Mary.

“We did some good things on offense but we also have a lot to improve,” Young said. “Limiting penalties and sustaining drives will be key for next week at William and Mary.”