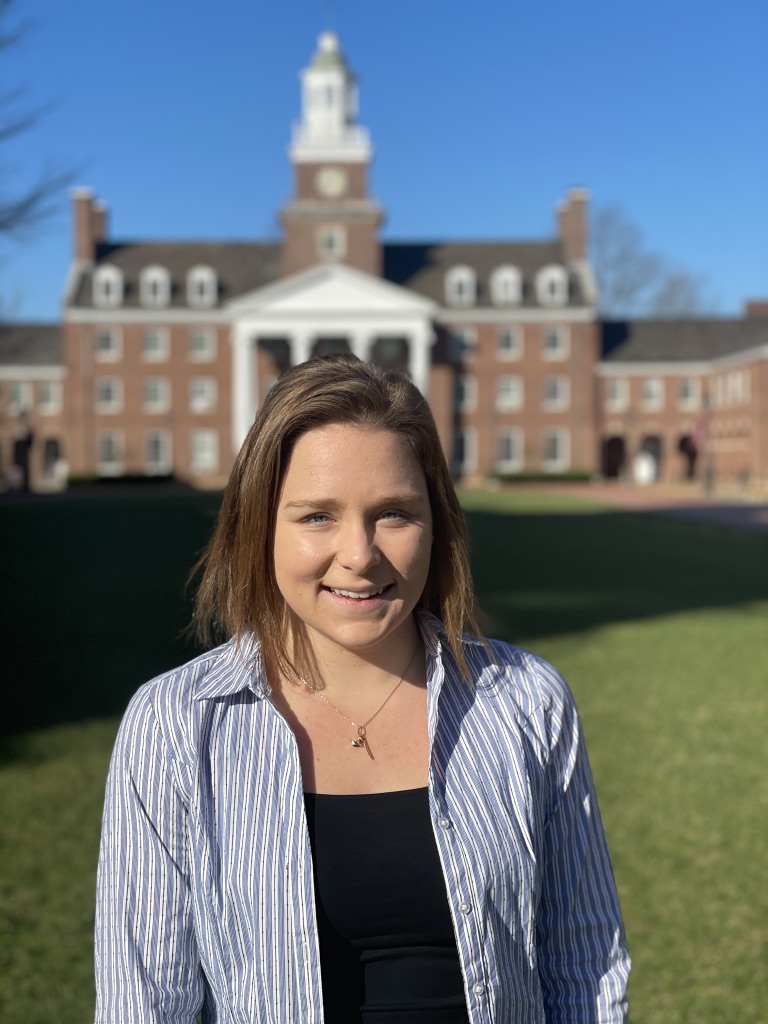 There may not be a ton of similarities between researching high-energy particle physics and swimming a 200-yard individual medley, but for Tara Leininger ’22 – one seems to feed the other.

That might be because she’s good at both. A physics and math major, Leininger earned the prestigious Barry Goldwater Scholarship in April, an award given annually to around 400 college sophomores and juniors nationwide.

This semester has been one of those times. In addition to winning the scholarship, Leininger was a force between the lane lines this spring – breaking three Lafayette school records and one pool record.

Looking closely at her best times shows that Leininger’s versatility extends beyond the classroom. She holds the top time in school history in the 200-yard backstroke and the 100-yard IM, and broke her own record in the 200-yard breaststroke in the team’s final meet against Lehigh. Leininger had set the record just a few weeks earlier in April.

“I think this was potentially my best season,” she said. “I would say part of it might’ve been that with everything related to the coronavirus…it almost took a little bit of pressure off of everyone. It got rid of this idea that everything had to be perfect for us to have good swims, and I think it opened up this space to just go for it.”

Leininger carries that determined mentality into her academic work too: this was her second time applying for the scholarship after being a finalist in spring 2020.

“To get the scholarship itself was great,” she said. “It was just a really nice feeling, especially after having applied last year.”

Leininger credited Professor Brooks Thomas of the physics department for his steadfast support of her research, and for providing the initial inspiration for her choice of physics as a field of study. Thomas helped Leininger revise her Goldwater Scholarship application so that she could “feel much more confident” in what she turned in.

“The level of mentorship has been absolutely insane,” she said. “He has been so helpful, even just from day one before I was even his research student.”

Thomas’s Physics 130: Relativity, Spacetime and Contemporary Physics class was also where Leininger discovered her interest in the subject during her freshman year.

“He really helped talk me through making some decisions about my major and figuring out what I wanted to do,” she said.

Leininger praised Thomas’s collaborators, Professor Keith Dienes of the University of Arizona and postdoctoral research associate Doojin Kim of Texas A&M, for assisting with her research. She also gave kudos to Lafayette Professor Jonathan Bloom for writing her a reference letter on her behalf, and said she was “super grateful” for the help her mentors provided.

“It was really great because I put in all of this work in the application, and my mentors had done so much to help me out: they spent hours just working with me on refining these essays…it was a big team effort in that way,” Leininger said.

Leininger’s research involves working on a theoretical model that relates to dark matter, which she explained is “a big topic in high-energy physics right now.” Her work revolves around how upgrades to the world’s largest machine, the large hadron collider (LHC), which is located beneath the France-Switzerland border, might influence her model.

“This upgraded feature [to the LHC] could be used to detect some aspects of these interesting high-energy theoretical physics models,” Leininger explained.

The upgrade to the LHC is a collaborative effort between thousands of scientists and engineers who are working on the machine, and Leininger’s team is saying that the upgrade is interesting for “an additional reason related to this theoretical model that we have.”

“We’re saying we can do more with this upgrade perhaps than they expected,” she said. “We’re investigating a very specific type of measurement we could take [with the upgrade] and we’re figuring out how well we can search it.”

Despite the complexity of the project underway, Leininger said she is interested in the broader field of high-energy physics. She plans to do a thesis next year and work with Brooks and some people in the math department.

“I’m sort of interested in looking into the mathematical side of things as well,” Leininger said. “Over the next year or so, I’ll try to figure out what my specific interests are as I get ready to apply for grad school.”

Virtually all Goldwater recipients intend to obtain a Ph.D., according to the foundation’s website, and Leininger said she will likely do the same.

“This scholarship is definitely geared toward people who are looking into a career in research, and that’s one of the things I’m most interested in right now,” she said.

Fortunately, Leininger’s dual status as a theoretical physicist and competitive swimmer allows her to take a much-needed break from one of her passions.

“In these last few years, I’ve realized how essential it is to have another activity and something else to do,” Leininger said. “It helps me refocus, and the quality of my work is higher when I’m able to be focused in the pool…away from just constantly doing math and physics. They both help each other out in a way, I would say.”