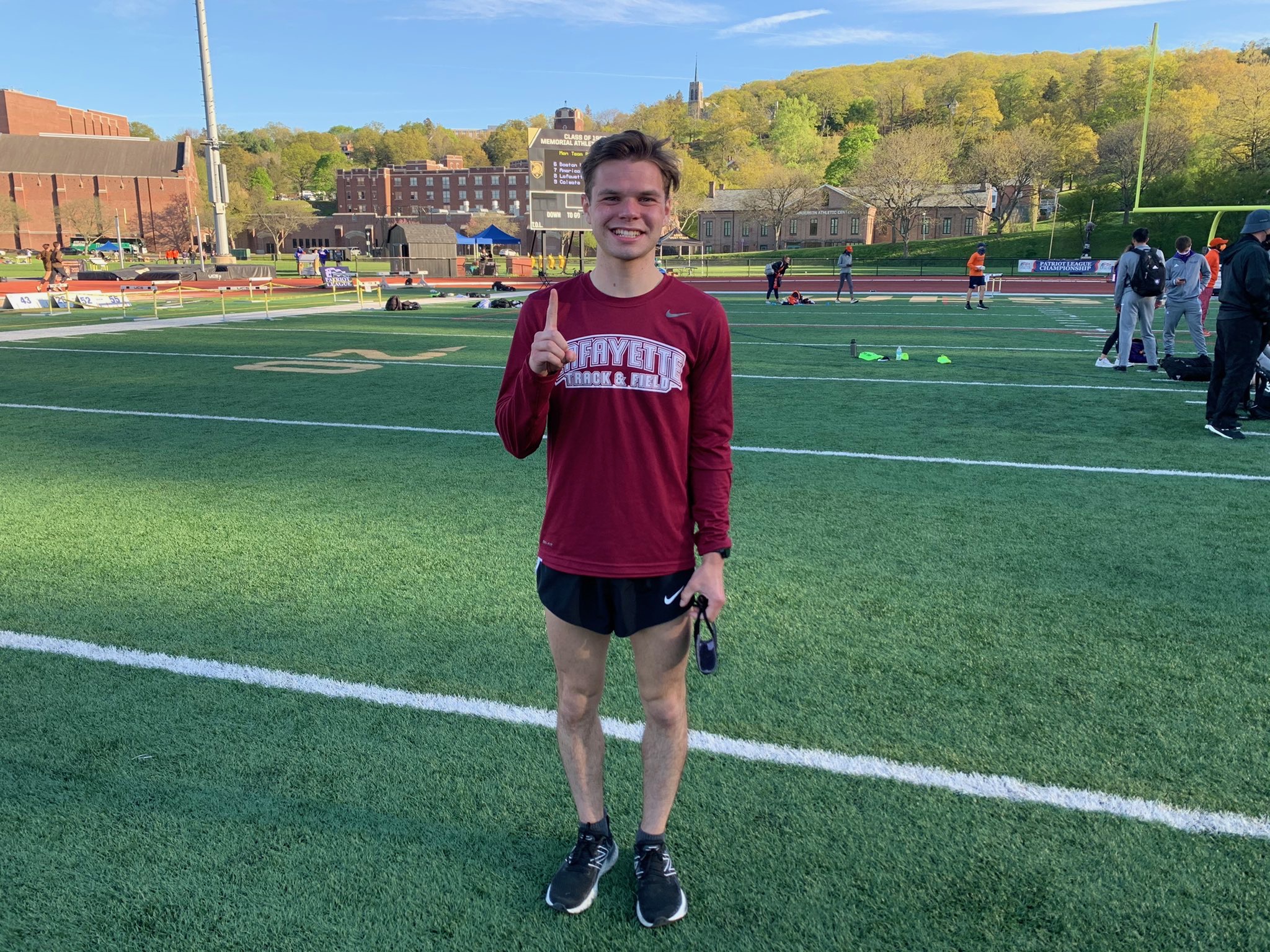 Branch broke the record, which stood since 1984, by over five seconds. (Photo courtesy of Athletic Communications)

The Lafayette track and field team endured one of the more difficult seasons of any Lafayette team this year, but the spring ended on a high note this past weekend as senior distance runner Ryan Branch broke a 36-year-old school record in the 5,000-meter run.

Branch finished the race in fourth place with a time of 14:30.18, finishing a full five seconds faster than the previous record set in 1984. Branch’s efforts earned the Leopards five points on the day, nearly half of the men’s team total.

“It’s pretty cool to be graduating with my name in the record books,” Branch said. “As a team we keep a record of the top-10 performances of each event and I hope one day I can look at that list and see my time and my teammates’ times on that list. To see myself on that list is cool, I cannot lie, but it’s great to see my teammates in the top 10 as well and hitting their marks.”

Prior to the spring semester in January, numerous track and field athletes got sent home for violating Lafayette’s COVID-19 restrictions by gathering. The team carried on this semester regardless and many athletes stepped up to the challenge, including Branch.

“We got hit hard in terms of COVID and the school’s rules,” Branch said. “We were light in bodies because of COVID issues but I’m super proud of everybody. Everyone that competed had to persevere through a lot and go through training and preseason workouts on their own. To make it to this point was an accomplishment in and of itself.”

Similar to the track and field season, Branch’s spring has been one of highs and lows.

“We had one cross country meet in March and I ran well as that was my first race in almost a year,” Branch said. “After that meet I decided I wanted to go for the 5,000-meter school record but my three track races were all subpar. I was not hitting the school record and was not coming close.”

Branch’s game plan worked, as he ran without focusing on his time and ended up turning in his best collegiate performance in the final meet.

“My goal was to finish in the top three and run the best I could,” Branch recalled. “During the race I did not know I was on pace for the school record until I began my last lap. I saw my time and thought if I closed hard I could hit the time.”

Branch didn’t even initially know if he got the school record.

“With 100 meters to go, I could barely see the clock and I pretty much blacked out,” he said. “I collapsed after crossing the line and I did not know if I got the time or not, someone had to come up and tell me.”

Branch’s preparation for this season was unlike any year before. Track and field athletes rarely have more than two weeks off throughout the year, so going home for 12 months was a new experience for the whole team. That being said, Branch did not let the time go to waste and used the extra time to build off his junior season.

“I left last year in the best shape of my life and I wanted to build off that,” Branch said. “Over the past year, I trained harder than I ever have. I viewed the pandemic as an opportunity to not worry about racing and times, but solely focus on training and getting better. I focused on enjoying my training and did not think about competing. It was hard running on my own all the time but looking back on it, it was all worth it.”

Branch leaves Lafayette and the track and field team in the best way possible: with a school record shattered and his name etched in the history books. While his journey on the team was unpredictable this past year, he already looks fondly at his time at Lafayette and on the team.

“My favorite memory has been being able to run with my best friends everyday,” Branch reflected. “Setting the record is something I will remember forever, but even in that moment the best feeling did not come when I realized I set the school record, it came when all my teammates hugged me after and to see how happy they were.”

“Being able to spend time with my best friends and having the opportunity to compete with them day in and day out has been special and is something I will cherish forever.”