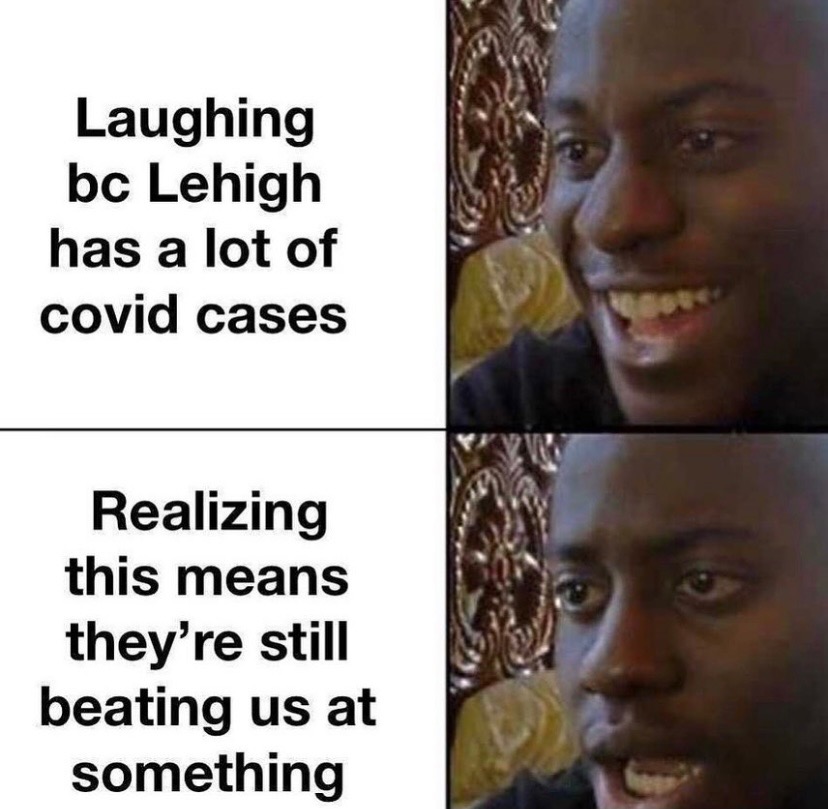 Rivalry memes about Lehigh are common in the @spicylafmemes account.

In the spring of 2018, a freshman with some free time created a meme page. 209 posts and almost 2,000 followers later, the creator of @spicylafmemes is about to graduate. But before they go, they have a few things they would like to say.

Spicy, who has asked to remain anonymous, said that they originally created the account after noticing “an obvious lack of memes about Lafayette on social media” in a time that was “the golden age of Internet memes.”

“Being the legendary meme lord that I am, I decided to take matters into my own hands,” Spicy said.

Throughout the years, the account, self-described as the “Spiciest memes on College Hill,” has covered topics such as dining halls, the Laf-Lehigh rivalry and the stress of finals week. This semester, however, Spicy explained that they have finally decided to take a stance on issues such as abolishing Greek life.

According to Spicy, two kinds of memes get the most likes: memes about COVID-19 and memes about President Alison Byerly. The most liked meme of all time on the account, is about both.

And while Spicy is the creator of most of the memes on the page, they also accept submissions from followers, although the standards for these are complicated, according to Spicy. Submitted memes must both fit the style of the page and be “spicy” in order to be posted. Memes that miss the mark and don’t make Spicy laugh do not get posted.

“It’s not difficult spotting a spicy laf meme when you see one,” Spicy said.

Unfortunately, Spicy only has a few weeks left on College Hill before they walk the stage at graduation later this month. But Spicy has no intention of letting @spicylafmemes end on May 30.

Last spring, Spicy asked followers to reach out if they were interested in taking over the account. Around a dozen students were interested, so Spicy designed an application which required applicants to answer questions such as their favorite and least favorite meme format, indicate their photoshop and computer skills and complete two essay questions on meme history, current meme culture and and the applicant’s take on the future of memes.

“It was intense,” Spicy said. “But I’m happy to say that we have two very qualified Spicy trainees ready to take over next semester. Hopefully they can live up to my expectations.”

And despite their imminent departure from the college, Spicy said they will likely never reveal their identity publicly.

“It’s never easy running a public social media account, especially when you make memes,” Spicy said. Therefore, in order to protect themselves from the negativity that results in posting memes that target specific things on campus, Spicy has chosen to remain anonymous.

Spicy would like to thank their supporters throughout the last few years and hopes that they made students laugh “at least once, and maybe more.”

“It was and will always be one of my greatest honors to be your SpicyLafMemes,” they said.