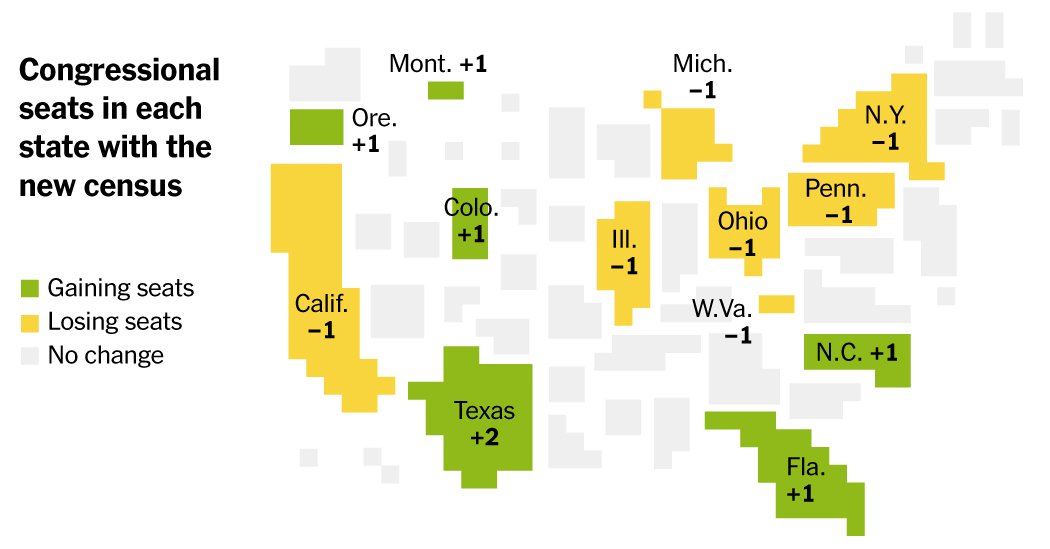 Pennsylvania was one of seven states to lose a congressional seat after the 2020 census. (Photo courtesy of The New York Times).

Paving the way for political battles in Harrisburg and a loss of political clout at the federal level, the Commonwealth of Pennsylvania lost one of its congressional seats last week after this year’s census.

The loss of a seat means that a delicate political balance of Pennsylvania’s 18 seats in the House of Representatives, which are evenly split between Democrats and Republicans, is about to be broken.

The next step is for the Pennsylvania state legislature to pass a law that will allow for redistricting. Since this law could be vetoed by the governor, Pennsylvania likely awaits an intense political standoff.

Further obstacles for the Republicans in the legislature may come from the Pennsylvania Supreme Court. In a 2018 decision, the justices threw out a redistricting map created by the Republican-dominated legislature after the 2010 census on the grounds that the map was gerrymandered. It is possible that a similar situation could unfold going forward, Kincaid said.

“[Currently], the Supreme Court has five Democrats and two Republicans on it, so there’s always a danger the Supreme Court might intervene again, as it did before. And so in the final analysis, it’s going to be a political bloodbath in Harrisburg as they try to get this worked out,” Kincaid said.

“It’s a continuing erosion of the state’s clout in presidential elections; it becomes less important with each census. And it means fewer members in the House of Representatives to fight for legislation that benefits Pennsylvania against the states that have much larger delegations. [Pennsylvania is] losing clout in both the House and the Electoral College,” Kincaid said.

He also thinks that this trend is likely to continue.

“It’s a gradual process, but it’s a losing game and is likely to continue,” he said. “I think we could very well lose a seat after the 2030 census as well.”

The redistricting process will likely affect the Seventh District of Pennsylvania, the district represented by Susan Wild, in which Lafayette College is located.

“The loss of one seat is going to affect all the districts in some way or another. I think because of the Supreme Court action in 2018, the legislature will make more of an effort to keep Easton together with Bethlehem and Allentown as a coherent district. But I think we should expect some changes in the boundaries,” Kincaid said.

Amid the projected political clash ahead, there are some ways for Lafayette students to get involved in the redistricting process and to make sure that it is as fair as possible. The League of Women Voters and FairVote are organizations interested in having Pennsylvania from an independent commission to deal with redistricting, Kincaid noted.

“Students could contact members of the legislature and the governor directly, saying they want a fair map that’s fair to both of the political parties,” Kincaid said.