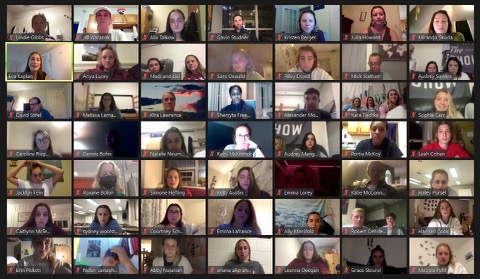 Around 100 participants tuned in on Zoom to watch the panel. (Photo courtesy of Eva Kaplan ’21)

For a long time in the realm of Lafayette athletics, it was very difficult to be “out and proud.” Gay slurs were used regularly and there was no space for queer students on campus or on sports teams.

On Tuesday night, four former student-athletes reflected on their experience at Lafayette as members of the LGBTQ+ community while also participating in athletics. About 100 participants tuned in on Zoom for the panel of athletic alumni sponsored by the Athlete Ally club. The panel was part of the club’s initiative to help athletes advocate for LGBTQ+ equality and comes in the wake of Lafayette’s recent scoring of 100 percent on the Athlete Ally Equality index.

The panelists were Kristen Berger ’15 who was captain of the softball team at Lafayette, Gavin Studner ’16 who was on men’s tennis, Miranda Skurla ’18 who played softball and Julia Howard ’20 who played volleyball at Lafayette and was part of Athlete Ally herself.

Berger explained at the beginning of the panel that on campus in 2011, there were really no athletes who were “out and proud.” This shifted greatly in the fall of Berger’s junior year in 2013, when Michael Sam came out and became the first publicly gay player to be drafted into the NFL at the time. This event opened up the conversation about the possibility of athletes being in the LGBTQ+ community on campus.

Studner found his team to be very accepting and open when he came out freshman year.

Studner explained that gay slurs were and still are common in the sphere of sports, but it was not tolerated on his team once he came out. Although the “locker room talk” changed within his own group, he would still hear offensive terminology while in the weight room with other athletic teams. Studner said that he would also hear these slurs while in competition with other schools.

Howard also talked about how the language used within her team improved after coming out during preseason of her junior year. People became a lot more conscious of the language they used and made sure to correct themselves and others when necessary. While there were still issues extending beyond her team, she definitely saw progress from 2016 to when she graduated in 2020, Howard said.

The presence of assumed heterosexuality in the athletic community and on the campus as a whole was discussed by multiple panelists. Skurla explained the difficulty of having to come out every time she met someone new, which is an issue that is perpetuated by society’s heteronormativity. She explained how lonely it could be not knowing if her teammates and other athletes were also in the queer community, and how even having one person to confide in who felt the same way was key for her at Lafayette.

The older panelists talked about how when they were on campus, there weren’t really any spaces for queer students besides Quest club. Although Quest is a welcoming organization, students like Berger may not have been comfortable enough yet with their identity to walk into a room that was very clearly for members of the queer community. Athlete Ally was still in the works at the time and hadn’t had a huge presence on campus yet. Berger explained that Professor [Kira] Lawrence in the Geology department was instrumental in her process of coming out, and helped to make positive change in the athletic department. While Lawrence is on sabbatical this semester, she is still instrumental in the club and helping to keep Athlete Ally present and engaged on campus.

Looking back, the panelists expressed that they wished they had come to a place of personal acceptance quicker. Skurla said that having a strong queer community in her adult life has helped her reflect on her experience at Lafayette. Although she had good experiences in college, she was held back from being her true self.

“As a society as things progress, it will be better at Lafayette too,” Skurla said.

In order to be better allies on campus and improve the athletic department, the panelists made the key points of not assuming someone’s sexuality, keeping the recruitment process diverse, making conscious changes in inclusivity and language, educating top-down from coaches to the players, creating safe spaces and instilling more awareness education and initiatives, as Athlete Ally has been doing.