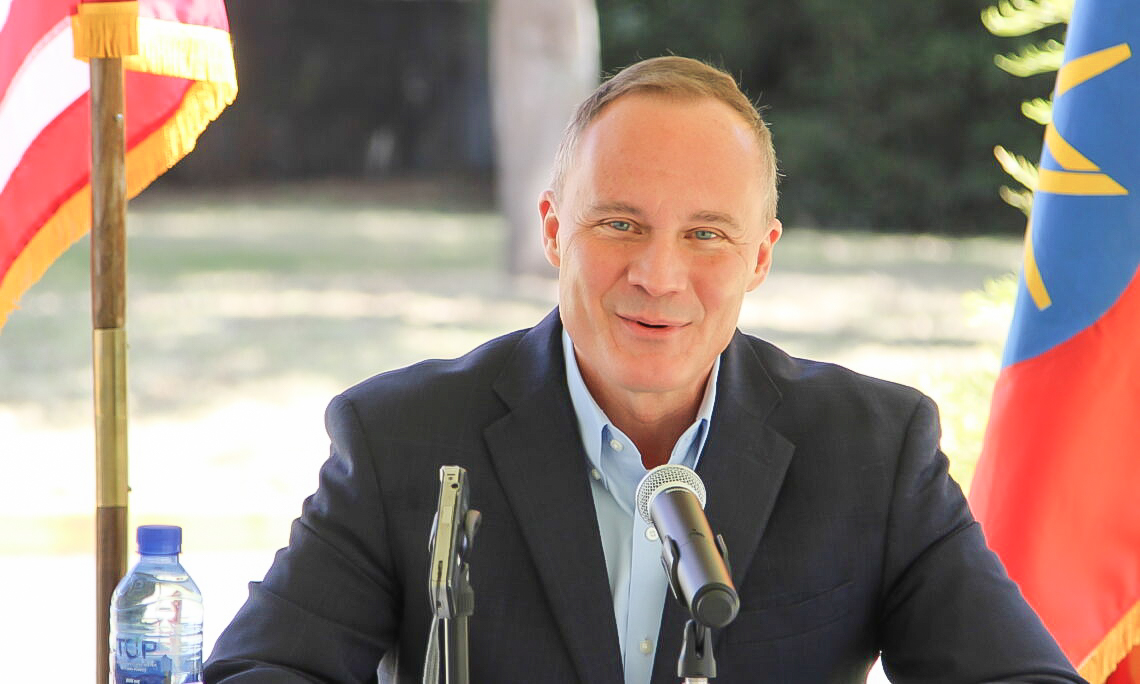 Michael Raynor has been nominated by the Biden Administration but awaits confirmation in the Senate before beginning his new position. (Photo courtesy of the U.S. Embassy in Ethiopia)

“He’s done very well for career foreign service officers, becoming an ambassador is usually the pinnacle of your career,” Government and Law Professor John Kincaid said. “I would say short of becoming secretary of state, you know, he’s really reached the high point of his career.”

His lengthy experience in African countries and his trilingualism has earned many people’s confidence in his ability to serve effectively in his new role.

“Raynor seems like a great choice for the position. He has a ton of experience being an ambassador and diplomat over many years,” President of the College Democrats Sam Jeske ’21 wrote in an email. “The fact that he has been nominated by administrations of different political parties also speaks to his commitment to the work he does and his ability to do his job in a nonpartisan manner.”

Wendy Wilson-Fall, Professor of Africana Studies, has a concentration in Senegalese politics and lived in Senegal for 13 years. She echoed Jeske’s comments regarding Raynor’s vast experience.

“I was excited to learn of the extensive experience of the Ambassador and his knowledge of French and Italian. He seems to enjoy learning about Africa, investing his energies in promoting positive change, and when necessary speaking clearly about U.S. policy and the struggles for democratic change in the region,” Wilson-Fall wrote in an email. “His long professional history in the region and in diplomacy make him especially prepared for this post.”

In terms of what makes a good ambassador, Kincaid said believes that one should ideally be extremely well educated in foreign and domestic matters of the country, in addition to being socially competent.

“Career foreign service officers get appointed to posts like this for their expertise in the area, and you have to be able to communicate the president’s positions to the government to which you are assigned the ambassador,” Kincaid said. “You also have to have good social skills and be able to relate very well to people.”

Wilson-Fall echoed the necessity for both extensive knowledge and social skills in an ambassador.

“A U.S. ambassador has to be extremely knowledgeable about the character of U.S. interests in the country to which they are assigned, for example, investment opportunities, policy alignment, civic life and democracy and related subjects,” Wilson-Fall wrote. “This person has to be prepared for long work hours, be ready to get started when they arrive in-country, informed and sensitive to local diplomatic protocols, and someone who enjoys meeting people and learning new things.”

Jeske noted the importance of an ambassador to advocate for “American ideals” in their respective assigned countries.

“Ideally, an ambassador to these nations would continue to continue to represent the interests of the United States in promoting democracy and economic activity abroad,” Jeske wrote. “Raynor seems to have done a great job of that in his past positions and I have the utmost confidence that he will continue to do so once he gets confirmed.”

Raynor will be serving as ambassador to both countries concurrently and without additional pay. While this is not typical, it is also not particularly rare, especially when the two countries are geographically close.

“Senegal and Guinea-Bissau are next door to each other and share a common border,” Kincaid said. “Guinea-Bissau is a very small country with about 1.8 million people, where Senegal is larger, about 15 million. So it’s a cost-effective thing for the government to use one ambassador.”

Kincaid added that most of the focus will be on economic development and delivering aid to these countries.

“They’re among the lowest developed countries in the world on the U.N. Human Development Index, so they’re really poor countries,” Kincaid said. “And so I’m sure that his role will be partly trying to facilitate U.S. aid to these countries.”

Kincaid remarked that Senegal is trying to bring electricity to their country, so Raynor will probably be helping to facilitate that.

“Senegal recently got a 60 million dollar loan to build a natural gas facility to produce electricity because there’s very little electricity in Senegal,” Kincaid said. “And so they’re hoping to over the next decade to electrify the entire country.”

Wilson-Fall, who lived in Senegal for over a decade, mentioned the Senegalese attitude towards democracy and peace.

“Senegalese people are proud of their democracy and abhor violence, in spite of recent troubles around presidential policy and opposing party candidates. One could read the popular response to these issues as evidence of how seriously the public in Senegal takes its commitment to a democratic society,” Wilson-Fall wrote. “People in Senegal greatly appreciate friendliness, respect, and polite behavior.”

Wilson-Fall also commented on the strong relationship between America and Senegal and the many connections between the two countries. She noted that, in addition to visits from more than one sitting President, Senegal has also benefitted from regular residencies by American artists, Fulbright fellows, and regional offices of the Ford Foundation, in addition to programs managed by the West African Research Center in Dakar, which include partnerships with the African American Museum (Smithsonian) and the Library of Congress.

As a current Government and Law student, Jeske noted the college’s ability to prepare its students for a career in public service.

“I think Lafayette does a fabulous job preparing students for careers in government or politics,” Jeske wrote. “The Government & Law faculty is incredible and is super helpful when it comes to discussing career options or connecting students to people they know in certain sectors.”

Wilson-Fall reiterated this statement and spoke on Lafayette’s study abroad winter interim program to Senegal, during which students spend three weeks studying in the country.

“I am extremely happy and grateful that the Lafayette administration has recently increased funds available for students who wish to go overseas for Study Abroad, particularly during the winter interim period,” Wilson-Fall wrote. “I think it’s a great opportunity for Lafayette students going to Senegal to have the possibility of meeting with the new ambassador. Leopards abroad!”

Kincaid said he also believes that the college should be proud of Raynor’s nomination.

“From what I’ve learned about him, he seems to be a very impressive guy,” Kincaid said. “And the college should be proud that he’s a graduate of Lafayette.”

Raynor was unavailable for comment at the time of publication.