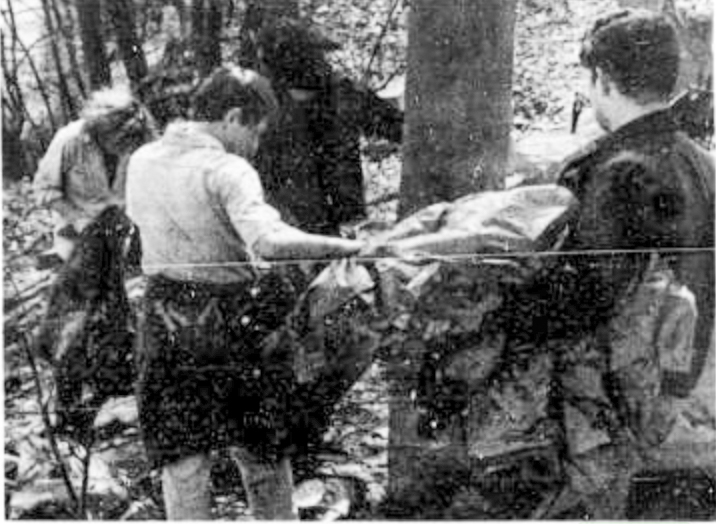 Around 50 students helped clean up the Delaware and Lehigh Rivers on Earth Day, 1970. (Photo from the April 24, 1970 issue of The Lafayette)

51 years ago, the United States celebrated its first Earth Day. And here on campus, students organized their own version of the day of recognition, starting a tradition that has continued to this day.

The Lafayette detailed the entirety of this historic day, April 22, 1970, as well as its effects on campus life.

Leading up to Earth Day, there was an apparent increase in discussions about environmental concerns.

One editorial from April 21, 1970 announced that the “destructive tempo has increased” on environmental issues, and that “even if the ecology situation is a fad, it is no less a crisis.”

“A few hard facts,” wrote another student in the same issue. “America’s obsession with increased economic growth is the basic cause of pollution. Overproductivity and overconsumption are at the heart of the problem. More cars, more highways, more non-refundable soda cans…eat away at our limited supply of natural resources.”

In February of the same year, a first-year student called on faculty, students and administration to participate in a “Movement to Stop Business As Usual” on April 22 in order to “search within ourselves and face these problems and their possible solutions.”

He added that it would be “altogether appropriate” for classes to be suspended on that day, so that the entire college community could devote the day to the world.

Although this student did not get his wish of having classes cancelled, some members of the community did make an effort to engage with environmental activism throughout the day. Around 50 students took bags and rakes and set out on a garbage hunt along the Delaware and Lehigh Rivers in an event sponsored by the Environmental Action Group. Some of the students got in canoes in order to fish out garbage, while others scooped waste out from the banks.

The Lafayette reported that during this event, “no one loafed or ‘goofed off;’ the participants did not want to make it a picnic.”

And one participant in the day’s festivities suggested that the day’s events were just a beginning.

“This is to let people know what can be done,” they said.

At this panel, Best explained that the crisis the world faces is “two fold and interrelated: the quality of life and the quality of our environment.” He later said that, “We have to stop fooling around waiting for science to bail us out.”

And after the momentum of the first-ever Earth Day, some students looked ahead to see how or if the changes would last.

“April 22, 1970 came in with a bang and is now only a whimper,” one student wrote in the May 5 issue. “Earth Day is passed and our air and water continue to be polluted daily. It is imperative therefore that we continue the fight for a livable planet.”

“While the burst of indignation on April 22, 1970 was truly historic, we must strive to make every day an Earth Day,” he concluded.

Another student expressed immediate concerns the week after Earth Day: “For those who participated in Wednesday’s clean-up, the answer to avoiding future clean-ups seems quite obvious; educate people about littering…But somehow the message just didn’t quite reach certain members of the campus—as evidenced by the disastrous condition of the grounds on Sunday.”

“Sunday morning, the quad looked more like a vacant lot in the city,” he continued. “The area around McKeen Dorm could have passed for an urban slub. Beer cups, toilet paper, and sundry materials were strewn over the entire area.”

The writer added that “Of course, we effete snobs don’t have to trouble ourselves with such meager tasks as picking up the litter that we have created. Naturally, we don’t have to wait for the social conscious among us to clean up. Here we pay people to replace our social consciences.”

So while the momentum behind Earth Day may have diminished slightly through the rest of that spring, it certainly did not disappear forever.

Activities for the fiftieth anniversary of Earth Day on campus were unfortunately canceled, as most students were away from campus due to the COVID-19 pandemic. This year, however, students are back and planning activities to recognize the day, just as students in 1970 did. The Office of Sustainability held a community meeting on Wednesday, an eco-friendly pop-up thrift shop yesterday, with a focus on clothing sustainability, and will hold an an event called “Sustainability Literacy” next Wednesday.