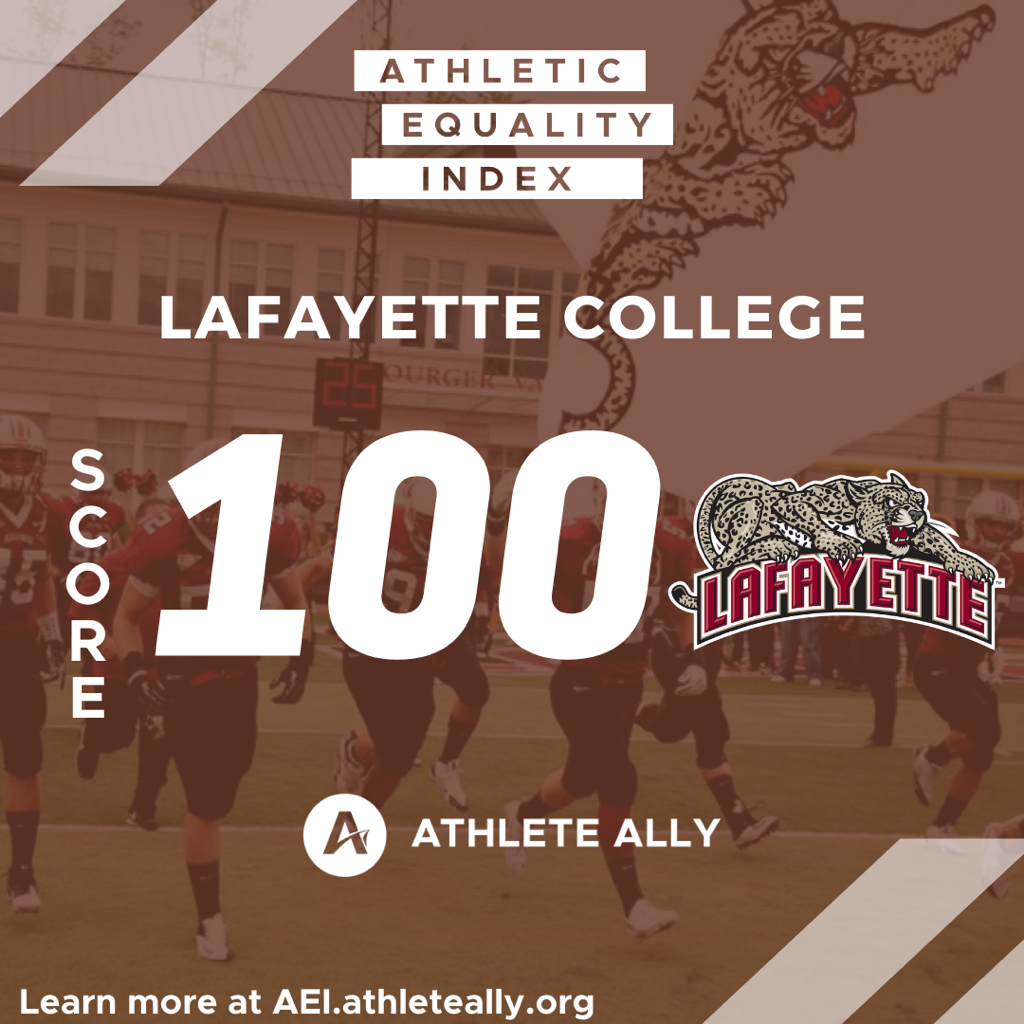 Due to the efforts of clubs like Athlete Ally that aim to promote diversity and inclusivity on campus, Lafayette College has scored 100 percent on the Athletic Equality Index, a report launched by the national Athlete Ally organization to score schools based on eight critical LGBTQ-inclusive policies and best practices.

Lafayette’s Athlete Ally club will be hosting a panel on May 4 giving four student-athlete alumni the opportunity to share their experiences at Lafayette and offer advice to help the school maintain the values that led to the perfect score.

Co-president of Lafayette’s Athlete Ally club Eva Kaplan ’21 explained that since the index was launched in 2017 and was just updated in 2019, not all schools have been surveyed yet. But, she said, the aim is to eventually score all three of the NCAA divisions.

As explained on the Athlete Ally website, the idea of the Athletic Equality Index is to “measure LGBTQ inclusion policies and practices in collegiate athletic spaces.” The report is the first of its kind, and gives a comprehensive look at how member programs support their LGBTQ student-athletes, coaches, administrators, staff and fans.

Kaplan said that the scores are built mostly from surveys and from direct interviews with students at the school. Scores are broken down into categories including Nondiscrimination Policy, Sexual Harassment Policy, Trans Inclusion Policy, and LGBTQ Educational Resources. Lafayette athletics received the maximum score in all eight of the categories.

“As a chapter, we organize events or go on national calls, and we’ve been talking with them for about two and a half years, so that’s how they kind of got to know Lafayette,” Kaplan said. “They see our pride games, they see that we’re having a panel in the spring, and that’s how they kind of judge our diversity and inclusivity.”

Lafayette performed better than some other Patriot League schools, as rival Lehigh received a score of 80 and Colgate was given a 75 overall. Boston University also achieved a perfect 100 score, and the remaining schools in the conference have not been evaluated yet.

Overall, the national organization intends for the index to be used by schools as a resource and a catalyst to continue LGBTQ-inclusive initiatives. As stated on the website, Athlete Ally believes “everyone should have equal access, opportunity and experience in sport, regardless of sexual orientation, gender identity, or gender expression,” and they are committed to providing the resources and support necessary to make that possible.

Institutions also have the opportunity to have their scores updated as changes are made to their program’s policies and practices, and as they increase accessibility and inclusivity.

As a continuation of Athlete Ally’s efforts to support the LGBTQ community, the club’s upcoming panel will highlight alums Miranda Skurla ’18, Kristen Lee Berger ’15, Gavin Studner ’16 and Julia Howard ’20 in a Q&A-style virtual meeting, co-sponsored by the Women’s, Gender and Sexuality Studies Department.

“Our club came together about two weeks ago and created a large list of questions that we had, ranging from their experiences, things that can help us in our community, what they’ve learned, what life was like outside of Lafayette, and what they learned from Lafayette,” Kaplan said.

The panel boasts a well-rounded group of four Lafayette alums with a wide range of experiences during and after their time in college. Former softball captain Berger worked for the Queer Archives Project at Lafayette. Skurla was also a softball player and now works as a clinical research assistant at McLean Hospital in Belmont, Mass. Studner played on the men’s tennis team and is now a sales executive at the Odell Studner Group in Pennsylvania. Howard, the most recent graduate, was a volleyball player and member of Athlete Ally herself and is currently a graduate student at Columbia University.

The panel will be held at 8 p.m. on May 4 and a registration link will be coming out in OurCampus and in the Lafayette Today.  Athletes will receive registration links through their Leopards Updates.

If student-athletes have questions about the club or want information on how to join, they may email the co-presidents of Athlete Ally, Eva Kaplan at kaplane@lafayette.edu or Alix Talkow at talkowa@lafayette.edu.