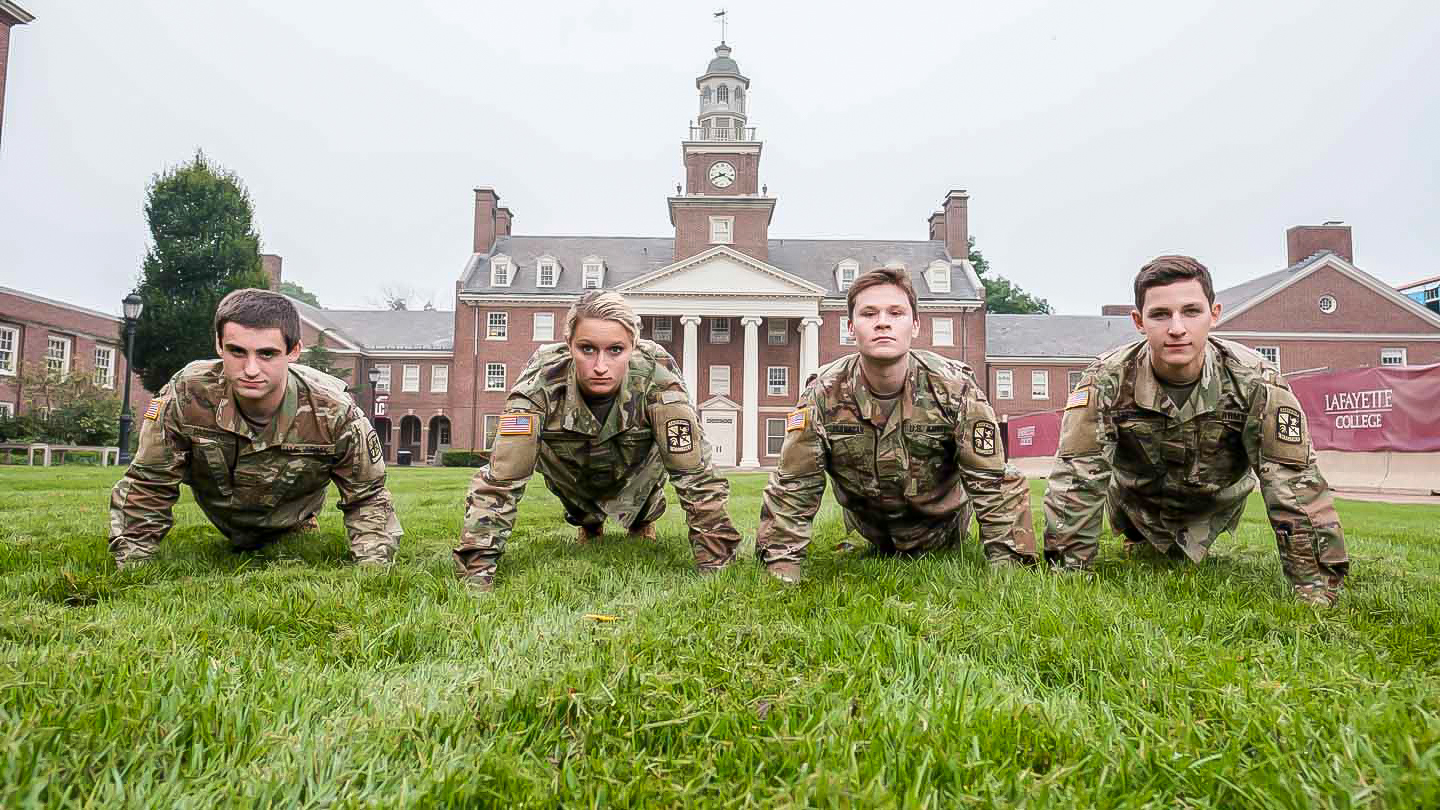 Long before the sun rises over College Hill and students make their way to the dining halls for breakfast, the cadets of the Lafayette College Army Reserve Officers Training Corp (ROTC) start their busy day off with physical training.

“I love it. It provides a break from normal academics while providing an experience that is unmatched in any other college program,” ROTC member Kyle Flanagan ‘22 said.

The ROTC program offers scholarships for students to attend university and become officers in the United States Army upon graduation. In addition to physical training, the program instructs cadets in leadership skills and military science courses. Thirteen students–11 men and two women–are currently enrolled in the demanding ROTC program at Lafayette.

“A regular daily routine includes waking up early–somewhere between 4:30 and 5:30–to conduct physical training. Then you would go through the regular day as a student: go to breakfast, class, meeting with professors. Many students have extracurriculars that they are involved in as leaders,” Sam Fishbein ’21 added.

Among the activities cadets participate in are competitions against other schools. The Lafayette team, for example, took part in the Sandhurst Military Skills Competition at West Point.

“The team trains hard and then competes against other teams from different battalions,” Flanagan explained. “You must be in extremely good shape, be squared away, and learn numerous skills including grenades, weapons, rope bridge, combat first aid, communications, etc. We took 22nd place, which we were happy with.”

Unlike other students on campus, the academic work of cadets is geared towards developing skills for military leadership. Many of the courses they take are through the military science program, which has offerings like MS 301: Training Management and the Warfighting Functions. Fishbein explained that their unique training as cadets progresses along with the rest of their studies.

As an MS1, or freshman, they learn about “individual soldiering skills and personal characteristics” that make good soldiers.

As an MS2, he said, cadets begin to learn to work together as a team and be introduced to tactical knowledge associated with army missions, as well as the systems of communication used in the army. As juniors, or MS3s, the cadets focus on “squad and platoon level tactics,” and are expected to be able to lead a 40-soldier platoon through various infantry missions by the end of the year.

“MS4s [seniors] are introduced to organizational leadership, and are placed in leadership positions over anything from 40 to 120 cadets, or in staff positions that work together to plan and coordinate all of the training events for the Steel Battalion with guidance from the instructors,” Fishbein continued.

The admissions process for ROTC is also unique. In addition to the expectations of all college applicants–a good GPA, extracurricular activities, SAT scores, and essays, ROTC candidates have to take a physical fitness test, Hannah Burlein ’22 explained.

“Then you will get approved to sit for an interview with a Professor of Military Science [PMS]. The PMS will upload your interview scores, and the materials are sent to Cadet Command. Cadet Command meets for three boards. If you don’t get a scholarship the first round, your packet goes to the second round, and then to the third round. So you have three tries,” Burlein added.

Once in the program, however, it opens a number of possible careers either in the military or in the civilian sector.

“I will be graduating and commissioning this May as a 2nd Lieutenant in the Active Duty Infantry,” Fishbein said. “I’ll go to Infantry Basic Officer Leader Course (IBOLC), Airborne School, Ranger School, and then head off to my first assignment as hopefully a Platoon Leader in mid-2022.”

Swearingen said he “will commission as a Second Lieutenant in the U.S. Army,” and after his Army obligation will pursue a career in civil engineering.

The cadets noted the unique lessons of their experiences thus far.

“There’s definitely an element of discipline it teaches you,” Ben Rider ’24 said. “It teaches you respect.”

“Whether or not you plan to have a career in the military, ROTC ultimately betters individuals as leaders and professionals,” Swearingen added.

View all posts by Michael Antonacci →