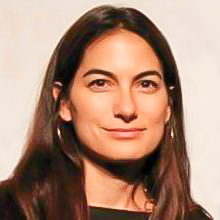 Alex Martinez Kondracke was a writer and producer on shows including ‘The L Word’ and ‘Hung,’ as well as a founding member of Time’s Up.

Writer and producer Alexandra Kondracke believes that we are what we watch.

“That’s what you see, that’s what you ingest, that’s the understanding you have of the world,” Kondracke said in a talk this past Wednesday.

For this reason, Kondracke and her wife, filmmaker Angela Robinson, are big advocates for the positive representation of LGBTQ+ people in movies and television.

According to Kondracke, filmmakers have a responsibility not only to produce positive representations, but also to make entertaining content.

“The joke we had with all these lesbian movies was that most of the movies were terrible. They were awful,” Kondracke said. “Which isn’t to say they shouldn’t have been made because we still wanted to see them…People were desperate to see positive representations of themselves.”

Despite how long she has been working in film and television, Kondracke confessed that she still struggles when it comes to articulating positive representation.

In addition to her work writing and producing, Kondracke is a founding member of Time’s Up, The Latinx House and She Se Puede. Her activism and film work do not stay separated; she has also directed viral videos about the Electoral College and what it would take to stop a Trump presidency.

“There’s been this unbelievable sexism baked into [Hollywood] right from the very beginning. You sort of think, ‘Oh, things are getting better,’ and then Harvey happened,” Kondracke said, referring to the case of producer and convicted sex offender Harvey Weinstein. “It was a conspiracy because the agencies were all in it. They knew they were sending these young actresses to be attacked.”

Although Kondracke called herself “incredibly lucky” because she started her career working with female writers and producers, she still recalled interactions with male directors who abused their power to take advantage of women in the industry. As a founding member of Time’s Up, she fought against the prevalence of sexual harassment and assault for women in all workplaces, including the entertainment industry.

“We called up the Women’s Legal Defense Fund in Washington, D.C. and said, ‘We want to do something with you to defend victims of sexual harassment,’” Kondracke explained.

“We did a lot of things that have made a lot of difference in Hollywood,” Kondracke said.