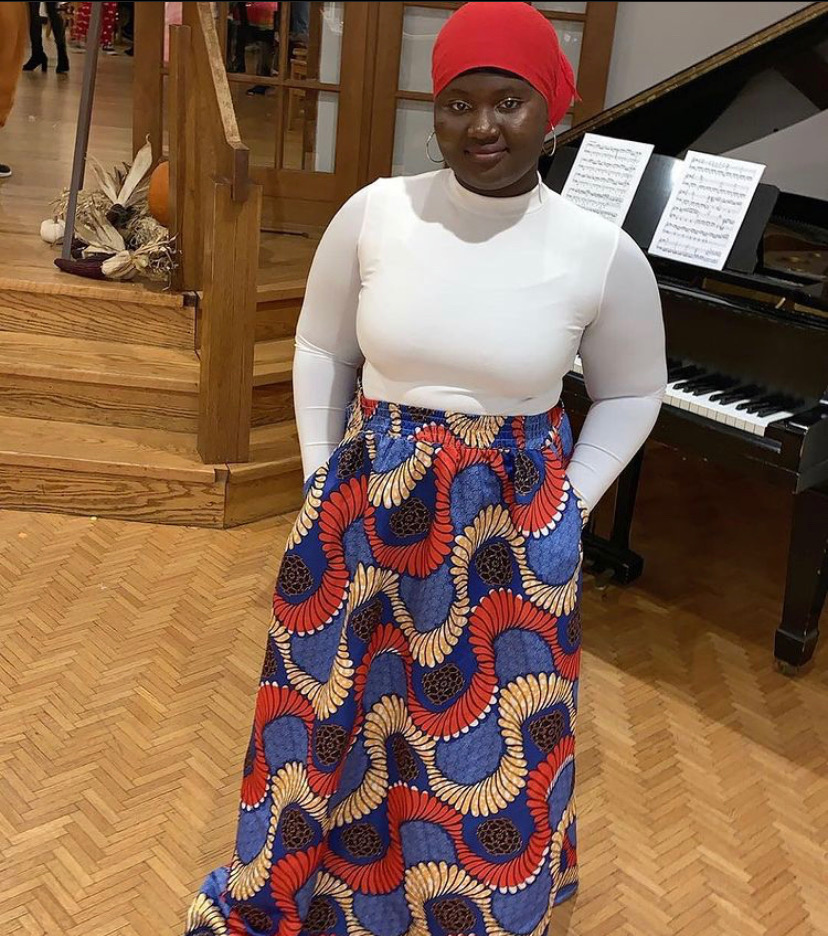 Fatimata Cham ’23 is an activist not just for herself, but for the people around her.

“Activism, to me, means community. Always has, always will,” Cham said. “Activism to me means uplifting those around me and dismantling these systems of oppression that have continuously and historically abused people of minority groups. It means learning when to decenter myself from conversations to uplift those around me.”

Cham first became interested in activism in the second grade. As a public school student, she noticed disparities within the educational system from an early age, especially between high-income and low-income areas. After writing a letter to her mayor about the issue, she started recognizing more injustices in her community in the South Bronx.

Although Cham first started advocating for gender equity in high school, she has been aware of the issue all her life. Her mother never had the chance to pursue her education because of the disparities in schooling between men and women in Gambia.

In her sophomore year of high school, Cham joined Girl Up, an organization dedicated to gender equality. Once she became a teen advisor, she became involved with organizing clubs around the country to fundraise for causes, participate in protests and lobby for legislation.

Cham started working towards environmental liberation when she interned with the first African immigrant to run for city council, Abdourahamane Diallo, in New York City. As a result of her internship, she started researching the environmental injustices in her district, District 16.

Then, Cham became a digital organizing fellow for Generation Green, an organization focused on the environmental injustices affecting the African diaspora.

“When we talk about environmental liberation, it’s so focused on climate change here in the United States. We don’t really think about the African continent, and how because of Western countries coming in and taking their resources, they’re deeply impacted by [climate change],” Cham said.

Cham also connects her advocacy to her poetry. In 2019, she published her first book of poetry titled Perfectly Imperfect, which uses poetry as a means to talk about the issues facing her community and the world at large.

“I used to always view activism through one lens. I used to think, ‘Oh, it has to be done through lobbying for legislation, or protesting,’” Cham said. “I didn’t realize that I could really use my art to really speak up about these things.”

Cham began writing more poetry in her first year of college. She especially believes in the affective power of poetry, she said.

“With poetry, I feel like you’re able to capture images for people who don’t necessarily experience these things. It’s going to be hard for someone to really care about issues like environmental injustice if they’re living in a rich area that is not impacted by environmental pollution,” Cham explained. “So really talking about my personal experiences, people’s experiences, through my poetry has allowed for me to tap into a wider audience.”

Another reason why Cham has turned to poetry more often when she wants to advocate for the issues she cares about is because of her negative experiences when protesting. She recalled attending a protest in 2017 where a white man approached her and yelled at her to “go back to [her] country.”

“I think it was more so what happened afterwards that really hurt me the most. People were painting it out like he had mental health issues…It was a lot of gaslighting,” Cham said.

She added, “It always sticks in the back of my mind, but also motivates me to continue to do my work.”

In addition to the explicit instances of hate that Cham has experienced, being a young activist comes with many other hardships. Cham explained that the most difficult part about practicing activism from such a young age is having to balance being a child and being an advocate for her community.

“I think most of my childhood has revolved around activism, and not really around joy and happiness. And it’s unfair,” Cham said. “I think as people of color, we experience this a lot, where we always feel like we can never have a break…This is a passion of mine, but it shouldn’t be the only thing that I do.”

“Our childhoods were kind of taken away from us because we’re doing work that the people before us were doing, but people in higher up positions weren’t doing,” Cham elaborated. “As an activist, I feel like I never got to fully experience joy. And I’m trying to find that back to my work.”

Cham said she always tells people who want to become activists that “[their] activism is going to look different from the next person’s.” She believes that everyone has the potential to make a difference in the space of activism.

“We have artists, we have teachers, we have mathematicians, we have people who are pursuing degrees in so many different areas,” Cham said. “I feel like you can always find an intersection within social justice.”

Additionally, Cham encouraged people to start by advocating for their own communities. She warned against the dangers of performative activism.

“Make sure you’re centering your community. Make sure you’re staying in contact with the people around you on a day to day basis. Make sure you’re doing something more than just re-sharing stuff. Make sure that when you accept that corporation’s offer to be on the cover of a magazine that it’s not just serving you, but it’s serving the community you’re trying to uplift,” said Cham.

In addition to advocating for one’s own community, Cham advised educating family.

“The people who you spend every single breath of your day with are the people who may need educating… If you’re not having these hard conversations with your family first, it’s going to be hard for you to even try and reach a wider audience,” Cham said.

According to Cham, the key to being a good ally and accomplice is decentering oneself. Additionally, she emphasized that people are not allies or accomplices until the community that they are trying to serve says they are.

“I think a lot of people view allyship through the lens of speaking up about the issue,” said Cham. “In that sense, you’re still taking up space from the people you’re trying to uplift because their personal experiences are not being centered.”

Cham said that her favorite part about activism is being in community with other activists.

“I got to meet people in different countries all over the world as a teen advisor, girls in Brazil who are advocating, girls in Mexico who are advocating against femicide,” Cham said. “Meeting people around the globe who are equally important and are working towards their own individual goals is my favorite thing about being an activist.”