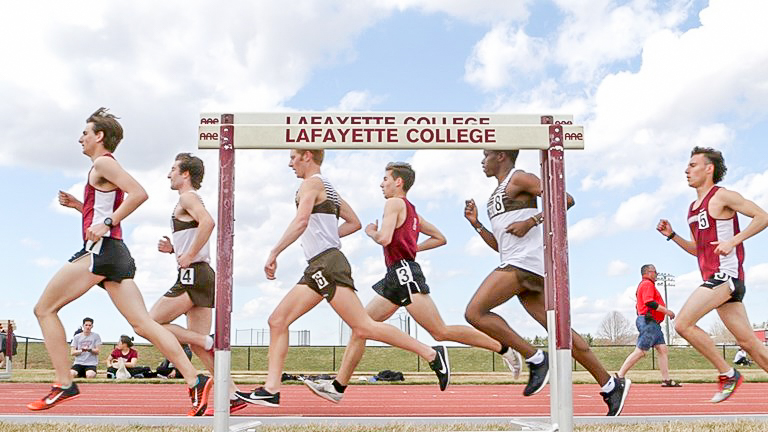 The team returns to action tomorrow at the Lafayette Open at Metzgar Fields. (Photo courtesy of Athletic Communications)

The Lafayette track and field team had their first outdoor event in nearly two years last weekend at the Lehigh Opener, earning several top finishes on both the men’s and women’s sides and excelling in the field events.

For the men, the Leopards took first through third in the javelin toss, led by junior Billy Prebola who had a winning toss of 59.95 meters, a new personal best and good for 10th all time in school history.

“It felt great to be back out there with my teammates after almost two years,” Prebola said. “It’s been a long time coming and it was a great feeling being able to compete with my friends again this past weekend. During the time off, it was tough at times knowing that our next competition would not be for a while, but I kept reminding myself of the goals I wanted to accomplish, and I knew I wouldn’t be able to achieve those goals if I didn’t put in the work.”

Finishing second in the javelin toss was junior Dylan Drescher with a best toss of 47.27 meters, followed by senior James Dailey in third with a best throw of 44.60 meters.

On the women’s side, the Leopards finished second through fifth in the shot put. Sophomore Grace O’Mara took second place with a mark of 11.83 meters, and was followed by senior Olivia Barney in third place (11.30 meters), sophomore Meredith McGee in fourth (11.09 meters) and freshman Bronwyn Mahoney in fifth (10.05 meters).

“This season is interesting in that it is also the sophomores’ first time competing outdoors as college athletes,” said senior Katie Ullmann. “So, it is a new experience for so many people. It is exciting to think back to how I felt when I first stepped foot on an outdoor track to compete as a collegiate athlete. Getting to see the underclassmen now experience the same is certainly special.”

Sophomore Annie Hathaway took second in the pole vault with a best jump of 3.35 meters, the eighth best finish in school history in the event. Ullmann also started off her season on a high note with a second place finish in the high jump with a top mark of 1.55 meters.

“Once I changed my mentality from a mindset of loss to a mindset of opportunity, it was much easier to find motivation,” Ullman said.

Freshman Sophia Dongaris performed well in her first collegiate outdoor track meet, placing fourth in the triple jump with a mark of 10.99 meters and fifth in the long jump with a leap of 4.95 meters.

On the track side of the event, senior Lizzie Harmon finished third with a time of 4:49.49 in the 1500-meter race. Dongaris posted a time of 15.81 seconds in the 110-meter hurdles, good for third place in the event, while classmate Lily Dineen placed fourth in the 400-meter dash with a time of 1:01.69.

The Leopards also managed to place third and fifth in the 800-meter run as sophomores Katie Riley and Alex Avery finished with times of 2:21.83 and 2:25.19, respectively.

The Leopards will be back in action tomorrow, March 27, hosting the Lafayette Open at 11 a.m.