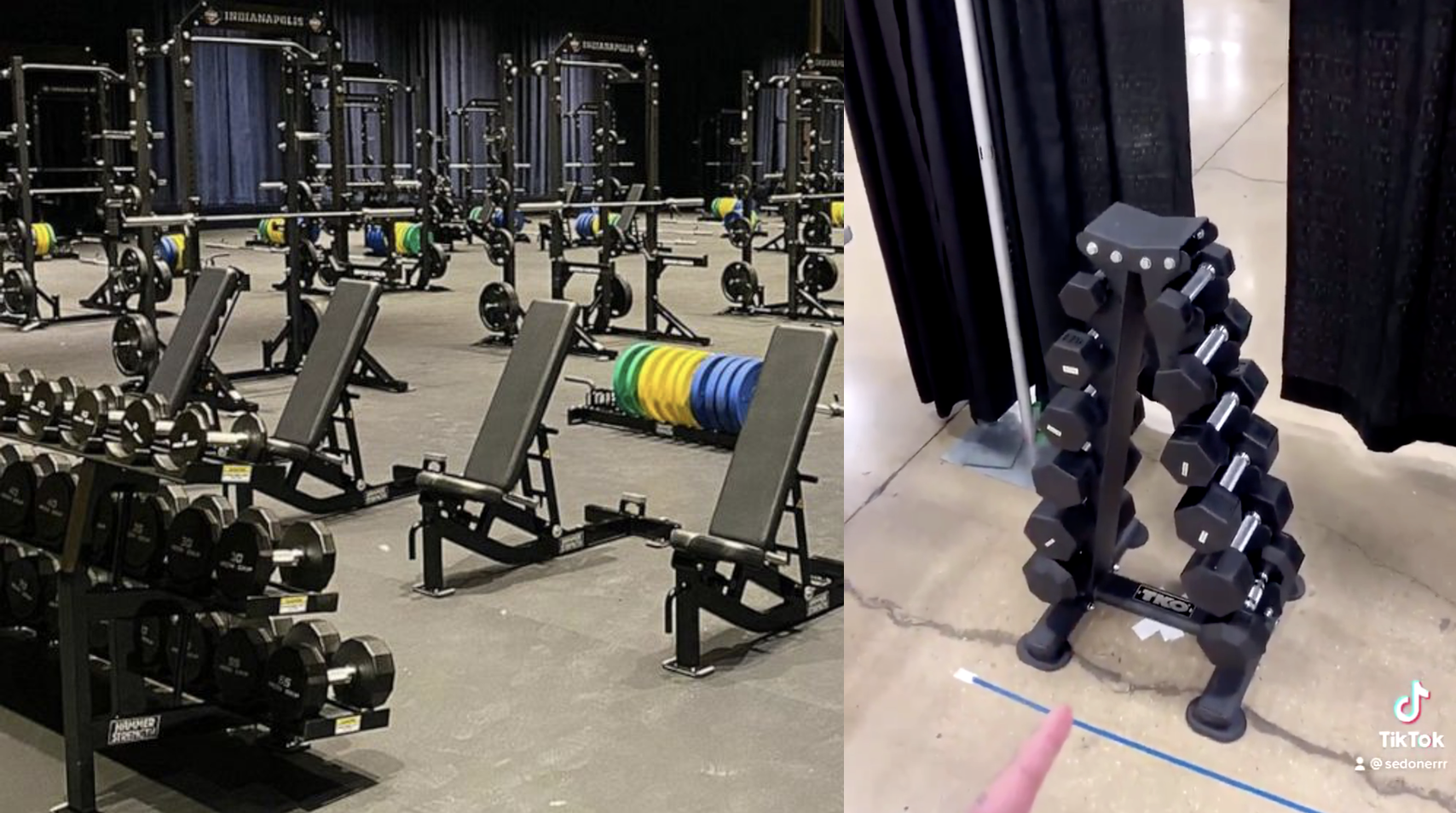 Pictured are the NCAA weight rooms for the men (left) and the women (right). (Photos courtesy of Sedona Prince TikTok)

In a year marked by change and the continued fight for equality, it is unfortunately no surprise to see women dealing with second-rate treatment, even at some of the highest levels of competition.

This past week as men’s and women’s college basketball programs began competing in the NCAA March Madness tournament, a video began circulating on the internet showing the difference between the men’s and women’s NCAA bubbles. The video, recorded on TikTok by Oregon Ducks forward Sedona Prince, shows the difference in weight rooms provided to the teams.

The men’s teams received state of the art equipment with an array of weights, the proper amount of training equipment for athletes competing for a college championship. On the other hand, each women’s basketball team received 12 yoga mats and a set of dumbbells that maxed out at 30 pounds.

“The discrepancy of the weight room areas that we saw for the NCAA basketball tournaments was appalling,” said Lafayette’s Athletic Director Sherryta Freeman. “I am extremely disappointed in the structure that allowed it to happen – which in many ways is indicative of a larger issue that doesn’t prioritize the women’s tournament nearly as much as the men’s. The fortunate outcome is that the inequities were brought to light so that they can be properly addressed and rectified for the future.”

Other videos and photographs that have surfaced since the original post by Prince show not only a discrepancy in equipment but also in the food and gear the players receive from the NCAA. While it is no secret that the NCAA allocates the majority of its funds to the men’s teams, the clear disparity in treatment is even more obvious now considering how female collegiate basketball has grown in recent years.

“At first, it was unexpected,” said Lafayette star basketball player Natalie Kucowski. “I assumed the women would have access to the best equipment and resources available. Thinking about it over a few days and seeing other images from the men’s and women’s bubbles, the differences didn’t really surprise me anymore.”

Especially notable is the fact that for the women’s NCAA March Madness tournament, female teams do not receive any kickback for their performance. The NCAA claims the women’s March Madness tournament is not self-sustaining, without disclosing how much of a deficit the event causes. On the other hand, each win a men’s team earned prior to the Final Four was rewarded with a $280,000 payday by the NCAA in 2019.

This payout allows small male programs such as Florida Gulf Coast and Oral Roberts to grow with each upset win while lower-seeded female programs struggle to grow even with victories on the biggest stage.

Another questionable decision by the NCAA is refraining from using the infamous “March Madness” brand for women’s basketball. The trademarked “March Madness” phrase is one that is instantly recognizable, yet the NCAA does not use the term on any of the women’s tournament basketball courts. Even though NCAA Division I women’s basketball is growing at a breakneck pace, the NCAA continues to hold back female athletes for seemingly no reason.

“Evaluating and ensuring equitable experiences for our student-athletes is an ongoing exercise,” Freeman said. “For example, when we are offering services – access to athletic training, the weight room, sport psychologist or nutritional supplements – we have to make sure that we are offering these opportunities equitably to our men’s and women’s teams.”

While Lafayette seems to be in good hands with Director Freeman at the helm, had the women’s team made the tournament this year they would have certainly faced the same discrepancies other female teams face. While the NCAA did correct their error shortly after the post by Prince, there are still miles to go to ensure equitable treatment of women’s teams.