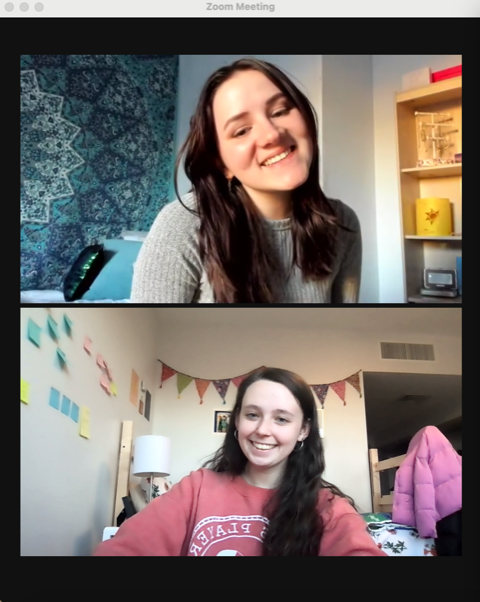 On Sunday, Lafayette’s Marquis players mingled with Lehigh University’s Mustard and Cheese society to share songs and monologues in a live-streamed YouTube performance. This was the first-ever cabaret between the two rival schools.

The opening act featured a duet between the self-proclaimed “redhead and blonde with an inseparable bond:” Kate Bettez ’23 and Julianna Shmaruck ’23. They sang Fleetwood Mac’s “Landslide,” and Shmaruck accompanied the performance on her acoustic guitar.

The cabaret was part of the Marquis Players’ plan to hold events that include “as many students as possible” under COVID-19 protocols and was initiated by Billy DeVito ’22, director of Marquis Players, who reached out to the Mustard and Cheese Production team and was invited to take part in their virtual cabaret.

Sarah Frankel ’21, president of Marquis Players, emphasized the importance of making the event accessible to everyone in the club.

Annie Krege ’23, operations manager of Marquis Players, noted that programs like the cabaret have helped the club become an “even more bonded and involved group.”

Krege and Olivia White, who is a senior at Lehigh, met every few weeks for months to review audition videos and choose the participants for the show together. They also wanted to figure out how to stream without lag between the performers. They then co-hosted the event.

Lauren Stango ’22, director of public relations for Marquis Players, noted that this event was successful because the technology flowed “seamlessly.”

At the beginning of the event, Krege and White introduced the talent by explaining that the two schools may be rivals but that, “tonight, we’ll unite and support each other.”

Melaina Carey ’22 sang Dogfight’s “Pretty Funny,” for which she implemented many acting choices and gestures. Helena Vannatter ’22, props designer for Marquis Players, selected Dear Evan Hansen’s bonus track song, “Hiding In Your Hands” for her performance and accompanied herself on the ukulele. Afterward, White deemed this performance “relaxing, good vibes.”

Madeline Kollar ’23 then concluded the first act of the cabaret with her performance of “She Used To Be Mine” from “Waitress.” The performance was clad with many riffs, moments of subtle choreography and demonstrations of storytelling through her eyes and voice.

Marquis Players’ co-fundraising chair, Shannon Dyke ‘22, performed Dear Evan Hansen’s “So Big/So Small”, embodying the role of Heidi Hansen. Ella Teitsch ’23 then sang her rendition of the highly acclaimed song “What Baking Can Do” from Waitress, which showed off her wide vocal range.

The final performance from Lafayette came from Alex Thurtle ’24 with her version of the “Still Hurting” from The Last Five Years. White said she was “so moved by the performance I can’t speak.”

Reflecting on the event, Frankel said that Marquis Players were able to “hopefully start a tradition of working with [the Mustard and Cheese society] in the future.” Stango expressed that events like these are “a way to feel closer.” Both expressed the possibility of more collaborations with Lehigh in the future.

The cabaret will be available for the foreseeable future on YouTube.