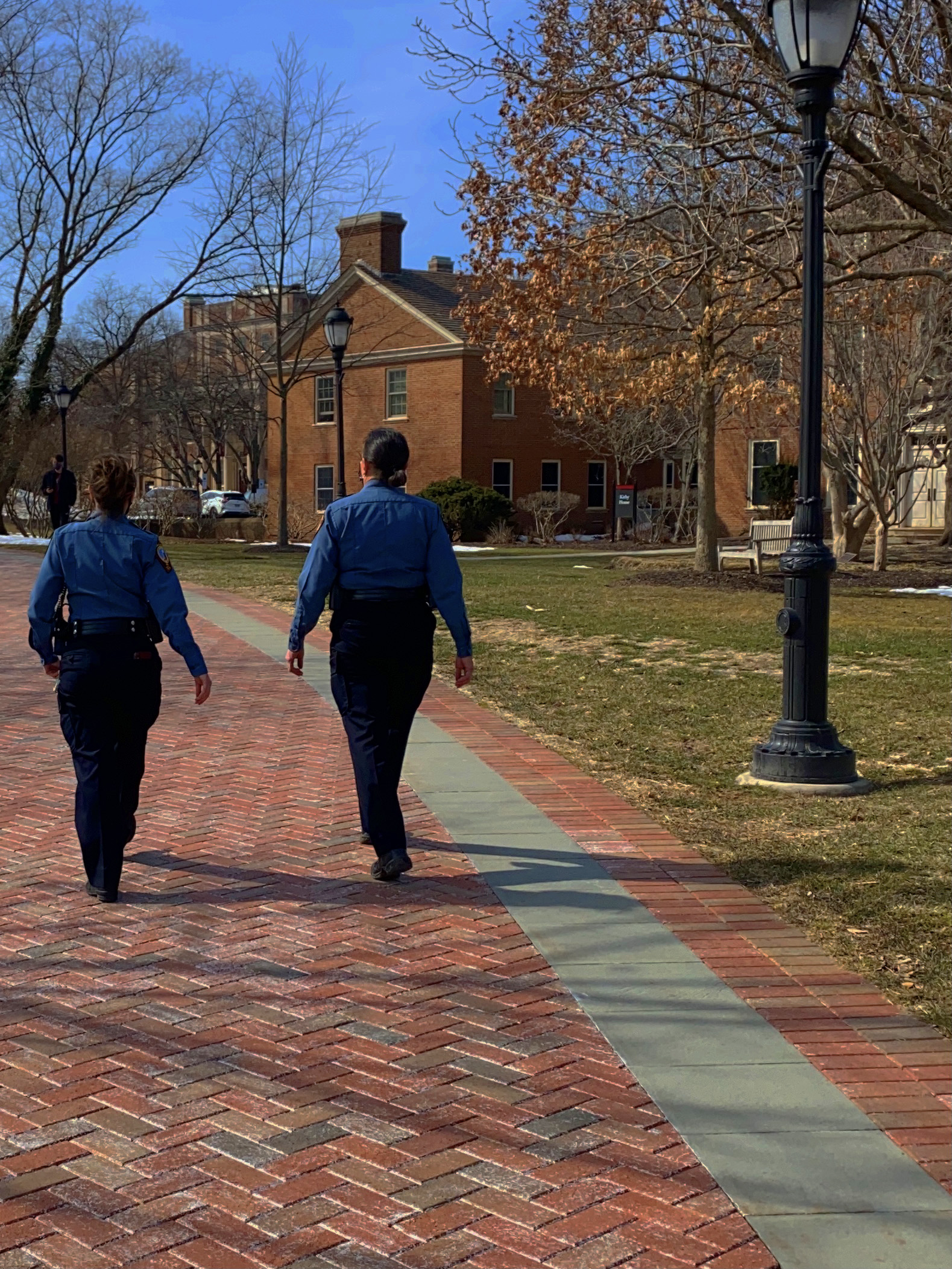 When Genevieve Torres ’24 watched a maskless Public Safety officer walk out of South College dormitory on Tuesday night, she thought about calling the person out.

“I hesitated,” Torres said. “I thought they might write me up.”

Such is the conundrum for many Lafayette students, who are stuck between a rock and a hard place when encountering maskless officers on campus: either confront the behavior and face possible repercussions, or stay silent in the face of actions they know are wrong.

“[The officer] is a person in a position of power,” Torres said. “And they’re the one not following the rules.”

Interviews with more than ten current students reveal that the issue of maskless officers around campus is not an isolated one. Students allege that officers have remained maskless, or have worn masks improperly, during routine house calls, in patrol cars and even at the Public Safety headquarters on Bushkill Drive.

“It’s very concerning, because they are in charge of keeping us safe and they’re not being safe themselves,” said Laura Coates ’21. “So it’s kind of hard to feel safe and really trust them, especially regarding COVID-related stuff, if they’re not following the protocols that they’re enforcing.”

Director of Public Safety Jeff Troxell acknowledged that he has received official complaints about maskless officers, including several in recent weeks. Troxell said he addressed those complaints “immediately,” and urged students to come forward with any concerns.

“I investigated, the [officers] were not wearing their masks, they forgot them in the patrol vehicles,” Troxell said. “I addressed it with each of the officers and then I sent a reminder to the entire department to follow the proper safety protocols.”

While the department does have an online form for submitting feedback, the vast majority of students did not file official incident reports. Many students reported feeling uncomfortable addressing concerns about Public Safety officers through the department itself, much less confronting an officer directly about wearing a mask.

“It’s almost one of those things where you wonder where the line between your regard for safety versus their authority is,” said Julianna Carpenetti ’21. “Do I even have the authority to correct an officer’s mask usage?”

Additionally, the overwhelming majority of officers do not have a photo on the Public Safety website, making it more difficult for students to identify officers when submitting incident reports. Out of the eighteen police and security officers in the department, who do most of the day-to-day work, only two of them have photos on the department website.

Officers are able to choose whether or not they want their photo on the website, according to Troxell.

“It’s optional. Some of the officers may, for privacy issues, not want their photograph on there,” Troxell said. “My goal is to eventually get everybody’s photograph on there as a way of engaging with the community and getting people to know who we are.”

Troxell noted that officers also wear name tags and that any identifying information, such as time of day, location, officer name and license plate number is useful in an investigation.

According to some students, the officers aren’t just leaving the masks in their cars: sometimes they take them off intentionally.

When Coates went to the Public Safety building to fill out an incident report in February, she made sure to bring a face covering. As soon as she walked inside, two masked officers greeted her and led her to a conference room.

When they arrived, each of the two officers took off their masks, according to Coates.

Then they convinced her to take off her own mask, in order to hear her better.

“I ended up taking it off because I have it so engrained in me to listen to authority figures like that, but in retrospect maybe I shouldn’t have,” Coates said.

While Coates and the officers were appropriately distanced, they were still indoors. Troxell said that Public Safety officers adhere to the Pard Pledge for faculty and staff, which states that all employees must wear a face mask covering the nose and mouth unless working in their own office with the door closed. Pennsylvania state law also requires all individuals to wear face coverings when away from their home.

“The rules we would follow is… inside buildings for sure, inside our property buildings, if we’re going into a business on College Hill…basically inside any building,” Troxell said. “Inside the patrol vehicle without anybody in there, I look at that as kind of an office space if they’re in there by themselves they don’t need to have their mask on.”

Back in December, Logan Reid ’22 interacted with two Public Safety officers on McCartney Street. It started out pretty well, he said, since one of them was already wearing a mask.

“The [other] officer didn’t have a mask on until I asked him to,” Reid said.

After a brief conversation outdoors, the officers asked Reid to accompany them to the Public Safety building and he obliged. But there was just one issue: Reid didn’t have a mask on him and the officers didn’t have any extras.

It didn’t matter. Reid said he was driven to and from the Public Safety building by maskless officers, and was allowed to enter the building without wearing a mask himself. Reid alleges he asked the officers several times for an extra mask but never received one.

Troxell said he was not aware of any mask violations in the department building and said he would look into it.

Interviews with other students revealed a similar pattern of maskless officers.

Sarah Bender ’21 filed an incident report after an officer arrived at her front door without a mask while responding to an emergency exit door left open at the apartment next door. Becca Scott ’22 filed an incident report after watching an officer remove their mask in line at Don Juan Mex Grill while taking a phone call. Carpenetti said she was visiting a friend in an off-campus house when an officer arrived to check on a door alarm and entered the residence with a mask below his nose. Isa Frye ’21 said she was evacuated from her apartment after the fire alarm went off and maskless officers went inside to turn it off.

“Public Safety is meant to keep its students safe yet there was a total disregard for my safety,” Bender wrote in her report. “We are in a pandemic and I signed a pledge in order to prove my commitment to keeping the campus safe. I expect officers to do the same.”

The response from Troxell is not okay. It’s not just officers “forgetting their mask”. They are blatantly disregarding the Lafayette and College Hill Community and it should not be acceptable. Come on Lafayette do better.