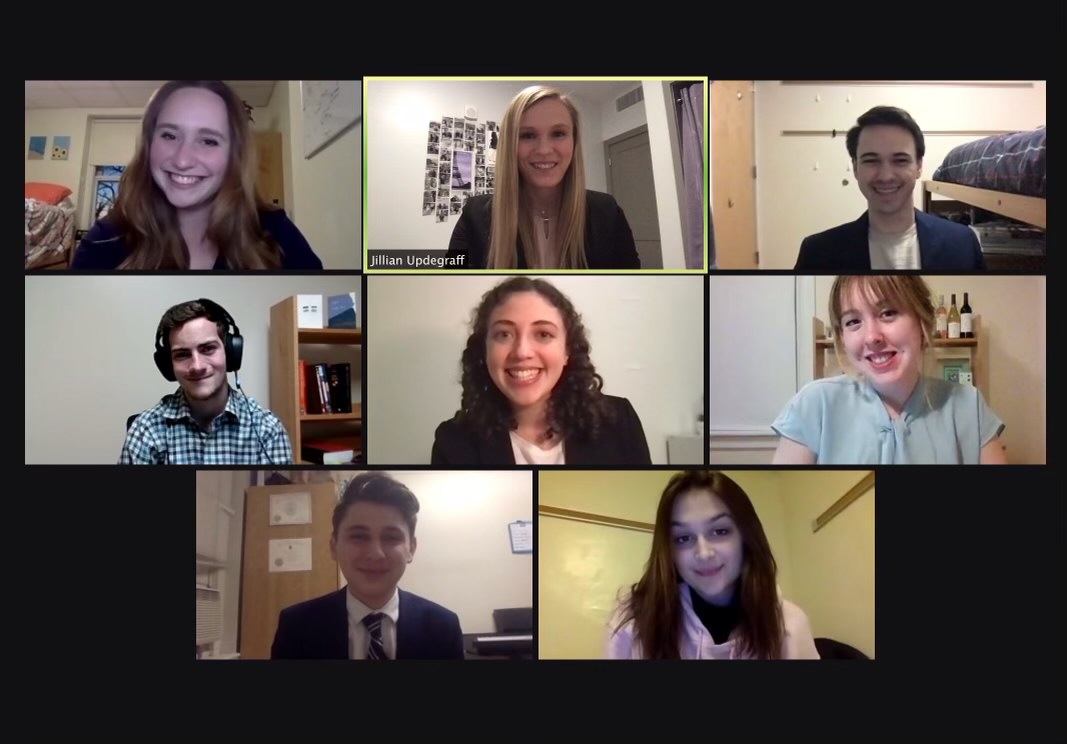 After the American Mock Trial Association (AMTA)’s national tournament was cancelled last year due to COVID-19, the Lafayette Mock Trial team made up for the lost season by getting a bid for nationals this year. This is the third time in Lafayette history that the team has qualified for nationals.

“Making it to the national tournament for Mock Trial is really quite an achievement,” said Scott Placke, the director of mock trial at Lafayette.

“Then you have to get onto ORCS, which is the second level… There’s only 8 of them and out of the 24 teams at each ORC, 6 of them go on to get a national bid,” Placke explained. “There’s only 48 teams that can make it to the national tournament.”

“Most years we’ve had no one get out of ORCs,” he added.

“We’ve always been right on the edge,” said Will Bennett ‘21, co-captain of Lafayette’s mock trial team. “Two years ago, we were literally just a tiebreaker away from going [to nationals]. Last year, our season was taken away from us… It’s definitely hard work that has been paid off.”

Mock trial consists of teams working together to prepare a plaintiff and a defense for a given legal case. At tournaments, students act out the case as witnesses and attorneys, according to co-captain Carly Jones ’21.

In previous years, the team would travel together to other schools to attend tournaments. However, the pandemic has led to tournaments taking place virtually. Although Jones said that she misses traveling with the team, the virtual format has also produced unexpected benefits.

“In a normal year, [tournaments are] by regions. So we would compete against schools around us… But now in a Zoom format, we’re playing teams in California, Texas, Florida,” Bennett said.

“Mock Trial is dominated by certain schools. We’re very close to Ivy League schools, so we’re closer to better competition. But now that we’re being spread out to other schools, I feel like the competition’s been spread thin,” explained Bennett.

Jones also credited the virtual format of tournaments with allowing the team to compete under less pressure.

“I think everyone’s been very relaxed about it this year… In previous years, we put a lot of pressure on ourselves to do really well in our competitive season,” Jones said.

“The first day of ORCS, we went three and three, and we had to basically win straight the second day. And we were like, ‘Okay, if we make it: great. If we don’t make it: great. Let’s just do what we know we need to do,’” said Jones. “I think that sort of attitude, rather than ‘Oh my god, we’re losing’ was really crucial for us being able to get through the season.”

Bennett agreed with this sentiment, remarking that this year’s season was “always going to have an asterisk on it.”

“So let’s just have some fun. If you want to do something a little out of the box that may not go over super well, why not? Cur non?” Bennett said.

Bennett described this willingness to take risks as another one of the team’s strengths.

“Especially when you start to get to this high of a level of competition, it’s super hard to separate yourself from the pack. In my opinion, the best way to do that is to do something interesting,” said Bennett. “These judges are lawyers who are sacrificing either their Saturday mornings or their Sunday nights to listen to a case; why not make it interesting for them?”

The virtual format of the activity has come with its own set of challenges. Mock trial relies on teamwork and communication, and this isn’t always easy to achieve in a Zoom call. However, Placke praised the team’s collaboration during the virtual season.

“I think the most important skill that mock trial can teach is collaboration and how to work as a group,” Placke said. “It’s really a testament to how well they work together to be able to do it this particular year.”

And looking ahead, Jones and Bennett are looking forward to the chance to compete in the national tournament.

“When I was a freshman, [the mock trial team] went to nationals for the second time in school history. It was a super big deal. I remember watching them do that and being like, ‘That’s really cool. I want to be able to do that,’” Jones said. “So it’s kind of special to go out like this senior year.”

Although the team has gotten the bid for nationals, their work is not finished yet.

“There are four more tournaments and then we’ll get a brand new case, which I’m excited for because we’ve been working with the same case since August. At this point, I’m kind of bored of it,” Jones said. “I’m excited. I also know it’s going to be a lot of work to put in, but I think it’ll be very well worth it.”

According to Bennett, schools will only have around three weeks to prepare a new case for nationals. Jones described this as a potential benefit for the Lafayette team.

“We usually do things a little bit more on the fly than the average team,” said Jones. “But I think this will play to our strengths because everyone’s going to have to do it on the fly.”

For anyone interested in learning more about mock trial, the team will be hosting information sessions about participating in the activity on April 20 from 12:15-1:00 and on April 22 from 5:00-5:45.