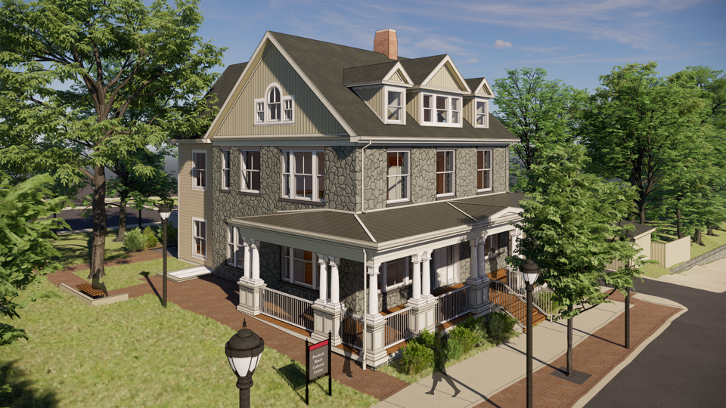 The Portlock Black Cultural Center is being demolished for the second time in its history, this time to make way for another new dormitory on McCartney Street. The Center will be given over $1 million worth of renovations and will now be adjacent to the president’s house, moving from its old location at the corner of McCartney Street and Clinton Terrace.

The project is set to begin this summer immediately after commencement, starting with the demolition of five houses that make the “McCartney 100” block. Once the houses are down, a new foundation for the building will be put in and the house currently at 517 Clinton Terrace—right across the street—will be picked up then placed on the new foundation.

Moving a whole building across the street is not as interesting as it sounds, said Vice President of Finance and Administration Roger Demareski.

“It always sounds more sensational to pick up and move a house,” he said. “If you hire the right company, it’s almost a non-event.”

These projects are expected to take several months, and once completed the final renovations on the house will begin.

Planning for the renovation began four years ago, when the school started hosting open meetings to solicit feedback from the community on what the new center could look like. At the time, former Dean of Intercultural Development John McKnight brought up the fact that the house was not large enough to accommodate both the occupants and the regular events and gatherings hosted at the Center.

Among the renovations to the house is an addition of several thousand square feet to the house. There is also a large wrap-around deck for outdoor social events in the plans as well as a fully renovated interior, including exhibits and memorabilia from the old Portlock Center.

This is the second time the Center is being moved to make way for college expansion. The old building, first established in 1970 and originally called the Malcolm X Liberation Center, was demolished and moved to its present location to make room for what is now the Farinon College Center.

This time, the majority of the project funding will be going toward renovations. According to Demareski, roughly $75,000 will go to demolishing the McCartney Street houses, $100,00 to move 517 Clinton Terrace across the street and the remainder of the $1.59 million budget will go to improving the space.

Funding for the project has been accumulating since the project’s inception as part of the college’s policy of apportioning capital for future projects on a yearly basis.

“We’re watching our capital carefully given the pandemic,” Demareski said. “But this investment, to me, is really, really important.”