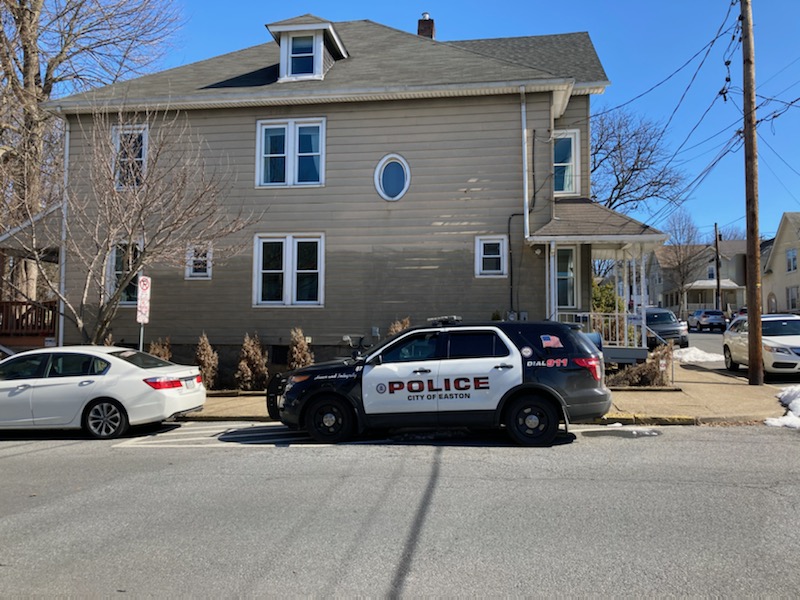 Police are stationed on the 400 block of McCartney and have yet to detain the individual(s) responsible for the break-in. (Photo by Andrew Hollander ’21)

An intruder brandishing a knife broke into housing on the 400 block of McCartney Street last Friday, making it the second time in two weeks that such an incident occurred near campus.

It is currently unclear whether the suspect in the first incident–who was described as a six-foot-tall, thin Black man wearing a dark hooded sweatshirt, black pants and possibly a ski mask or hat–was the same as that in the robbery of Feb. 22, who was described in a Public Safety message as a “dark skinned male wearing t-shirt/shorts.”

“We believe that those two are connected,” said Lieutenant Matthew Gerould of the Easton Police Department. “We don’t rule anything out.”

Gerould noted that the intruder entered the housing either through an unlocked window or door, and that “there were no physical injuries.” He could not confirm whether anything was taken from the house or specify the type of knife that the suspect used.

He also noted that the police have not had reports of crimes in Easton related to those near the college.

In the meantime, Lafayette has taken several precautions to increase security on campus.

Patrols that were expanded after the first robbery have been augmented with an officer stationed on the 400 block of McCartney Street and additional patrols on foot who may “verbally engage” with people in the vicinity, according to a Public Safety email sent out to the community.

The college has also contracted with a private security company called Signal 88, who specialize in creating “a strong visible deterrence,” according to their website. Guards from the company can be seen patrolling the sidewalks on McCartney Street, and are unarmed at the college’s request.

Assistant Director of Resident Life Tim Ulrich also informed those living in off-campus housing via email that, in addition to the regular inspections of window and door locks, facilities staff will be escorting contractors to take measurements for the installation of passive emergency notification devices this week.

Director of Public Safety Jeff Troxell noted that the delay between the incident and alert resulted from the emergency call going to the county level first and the logistics involved with coordinating the response.

“Sometimes there might be a slight delay in confirming what happened between Public Safety and Easton PD,” he said. “When we’re patrolling campus, we’re physically closer, so that’s why we ask people to call the 444 number. When in doubt you can call 911 for sure, it’s just sometimes that might be a delayed response and a delayed alert being sent out.”

Vice President of Campus Life Annette Diorio noted in a letter to the community the college’s commitment to student safety and also acknowledged the fear the spree has produced.

“We recognize that violent crimes impact those who experience them as well as other members of the community,” she wrote. “We want students to know we are working hard to keep the campus safe and that your vigilance is part of that system.”

Anyone with information on the case can call the Easton Police Department tip line at 610-250-6635 or contact Public Safety.