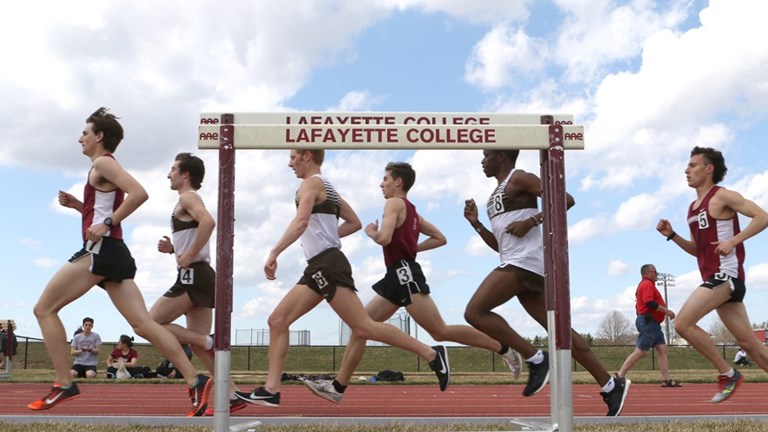 Both the men and women finished third out of three teams at the Colgate Pod Meet. (Photo courtesy of Athletic Communications)

The men’s and women’s track and field teams traveled to Colgate University for a tri-meet with Lehigh and Colgate last Saturday, Feb. 27. The event was Lafayette’s first meet this year due to the ongoing COVID-19 pandemic.

“My time was certainly not the best but getting out there and racing again was a feat all on its own,” Ellmaker said.

She and Dineen teamed up with sophomores Katie Riley and Alexandra Avery to take second place in the 4×400 relay with a time of 4:17.40, just two seconds off the first place pace.

“I think we as a team can only progress up from here,” Ellmaker said.

Sophomore Annie Hathaway rounded out the Lafayette event winners with a first place finish in the pole vault, recording a top mark of 3.20 meters, while senior Katie Ullmann earned third in the high jump with a best leap of 1.55 meters.

Swiniarski said the team is “hungry to get to the outdoor season and show what we’ve been working towards the past year.”

In the 4×400 relay, junior Ryan Murphy teamed up with freshman Willie Marina, sophomore Andrew Massaro and senior Danny Hullihan for a second place finish in 3:41.68.

“Being able to compete and watch my teammates race, jump, and throw again brought some much needed normalcy to our lives,” Swiniarski said.

The Leopards will look to build on their first meet performance when they make the short trip to Bethlehem to compete against Lehigh on March 20.

View all posts by Henry Nicosia →