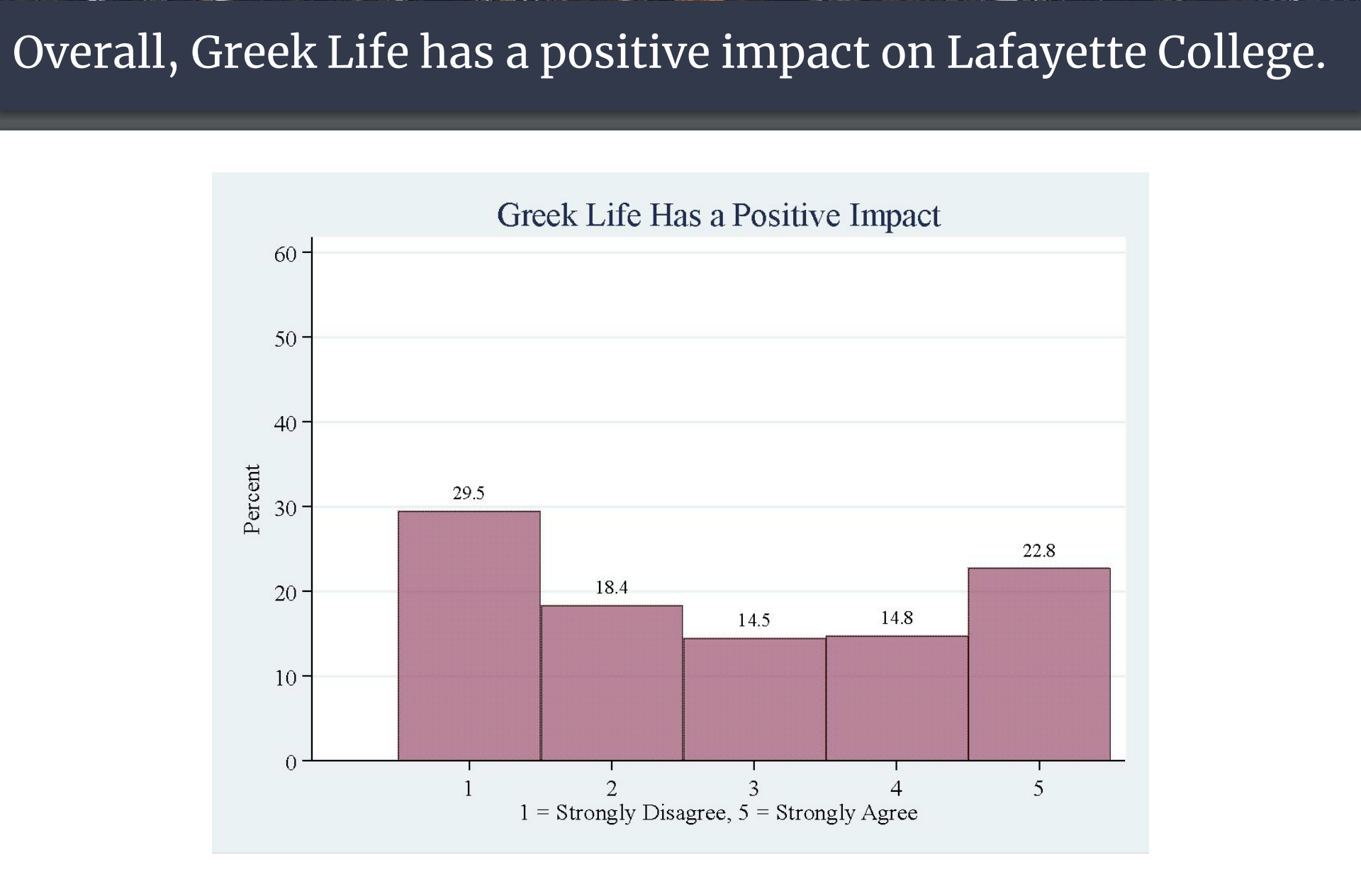 The survey responses to the Greek Life Climate Survey completed last semester painted a clear picture of what many already thought to be true: the campus is divided on the issue of fraternities and sororities.

Director of the Greek Life Committee Lauren Ameruoso ’22 and Student Government Representative Caroline Burns ’22 presented their takeaways from the survey to the Student Life Committee of the Board of Trustees last week. The pair presented their findings by relating it to the college’s larger mission, and in the process posed a question to the trustees.

“The college has values as well as strategic directions for moving forward as an institution. One of the values is diversity and inclusion, and another is to increase affordability to students regardless of their socioeconomic status,” Burns said. “Some of the main issues we’ve seen with Greek life is the lack of diversity and inclusion and lack of affordability with really high dues. ‘How can Greek life and those values compliment each other and coexist?’”

While certain members of the Board of Trustees were receptive to the presentation and the questions it brought to light, others were skeptical of the survey’s legitimacy.

“We worked with faculty and professional staff for months last semester and were confident in the survey and its questions. Unfortunately, some of the board members weren’t as confident,” Burns said.

Members of the board’s Student Life Committee inquired about specific matters of contention with Greek life during the meeting. Concerned about the protection of the survey respondents’ privacy, however, Ameruoso and Burns felt limited with how much information they could share.

“The board members asked about some of the specific reasons why individuals were dissatisfied with Greek life. This was actually hard for us to relay,” Ameruoso said. “A lot of those specifics were in the open responses and because of privacy reasons we were not allowed to share, and didn’t feel comfortable sharing.”

Privacy matters aside, Ameruoso noted the difficulty of relating current students’ experiences with Greek life to the experiences or conceptions of fraternities and sororities shared among members of the board.

“We realized there was a disconnect,” she explained. “We had some alumni from both fraternities and sororities sharing their experiences. You could tell that it did seem a bit different than how Greek life at Lafayette is today.”

“We were trying to make them aware that the experiences of current students are definitely different from what it was like when they were students,” she added.

It is vital that the Board of Trustees is made aware of students’ experiences with Greek life, as its members have the ultimate decision-making ability regarding any significant changes to Greek life at Lafayette. Burns was hesitantly optimistic about the results of the meeting.

“The board did recognize that there are issues, it was the start of a conversation,” she said.

Nevertheless, it will take some time before any large change takes place, as there is currently no motion for reform by the Board of Trustees.

Echoing the outlook of many students on campus, Burns noted that “there is work to be done.”