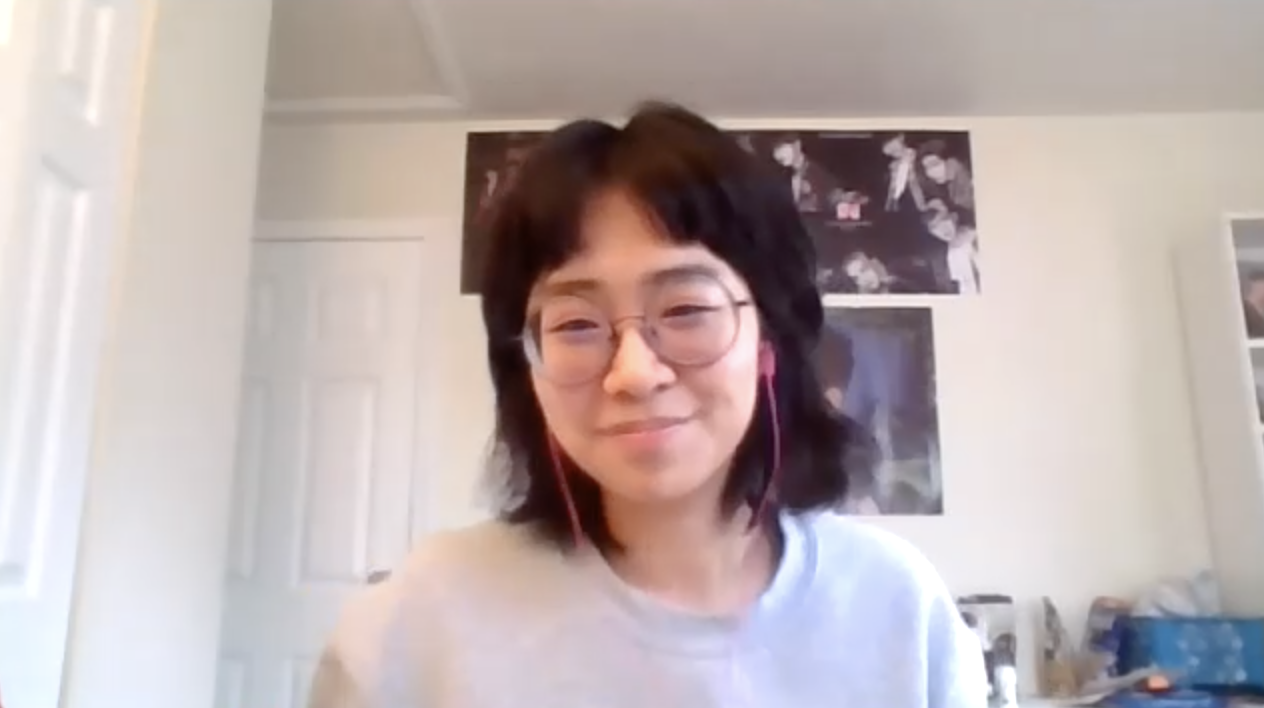 Shirley Liu ’23 originally wrote their award-winning poem for a creative writing class at the college. (Photo courtesy of Bernadette Russo ’24)

Branching off from their typical prose writing, Shirley Liu ‘23 took up poetry to explore societal issues and deconstruct personal biases in everyday life. Their poem, “黄”, translated in English as “Yellow,” was awarded the Jean Corrie Poetry Prize for its exploration of cultural identity.

Held under the auspices of the Academy of American Poets, the Jean Corrie Poetry Competition acknowledges student writers for their exceptional promise in poetry. It is open to freshmen, sophomores and juniors and was judged this year by poet Edgar Kunz.

Liu’s winning poem was originally written for their Intro to Creative Writing class. Prior to that, poetry was not a medium of writing they usually approached. The piece was inspired by an assignment prompt about loss; in Liu’s case, the loss of their culture and language.

The poem is framed around the comparison of paint swatches in a hardware store to skin tones as a commentary on the internalized colorism seen in East Asian culture.

“When you shift to let the greater culture influence your thinking, you lose parts of yourself that you wouldn’t anticipate beforehand,” Liu said.

However, Liu added that the main message of the poem is not solely about internalized colorism, but about what comes with that notion.

“What happens when you think about your own skin tone that way? What do you lose? You lose your culture, you lose that connection with your family, you lose some of your heritage, you lose your language,” they said.

Liu said they wrote the poem during a reflective time in their life where they were going through a period of self-pitying and investigating feelings of culture loss. Though not the poem that Liu imagined, or even wanted to win the competition, Liu said that nevertheless they were thankful that their message was able to encourage contemplation.

“I am grateful that the judge saw something in the poem that connected with him, even if I personally am not a fan of how I framed it, I’m happy that my poem made a connection,” they said.

Liu’s approach to writing pieces typically begins with a framing device that eventually transforms into a bigger picture.

“That’s how a lot of my writing works. I have a seed of an idea, for example comparing skin tone to paint swatches, and that seed blooms into a separate poem,” they said.

Liu is looking to explore poetry further in the future. They are double majoring in English and Philosophy and looking to attend graduate school for library science.

On the whole, Liu wants readers to question their own internal prejudices with their pieces.

They said, “I want people to investigate their own preconceived notions, whether it is internalized colorism or some other sort of internalized bigotry, and examine where that comes from.”

white, chantilly and ivory and eggshell.

I choose panna cotta because I have a sweet tooth

and because it is two shades lighter than my palms.

I don’t remember when the sun became

something to avoid, just that I would scrub

the dirt in my complexion with steel

wool until my skin turned raw and

bloody. There are 293 swatches in

I am seven when I tell my mom to stop

speaking Chinese to me. I was in love with a boy and his

eggshell skin. There are 267 swatches in

I am sixteen when I start learning Chinese

again. The syllables set my tongue on fire.

Mandarin is pronounced huang. I scour the

store for a swatch with the same name.

Disclaimer: Shirley Liu is the assistant arts and culture editor for The Lafayette newspaper and did not write or edit this article.