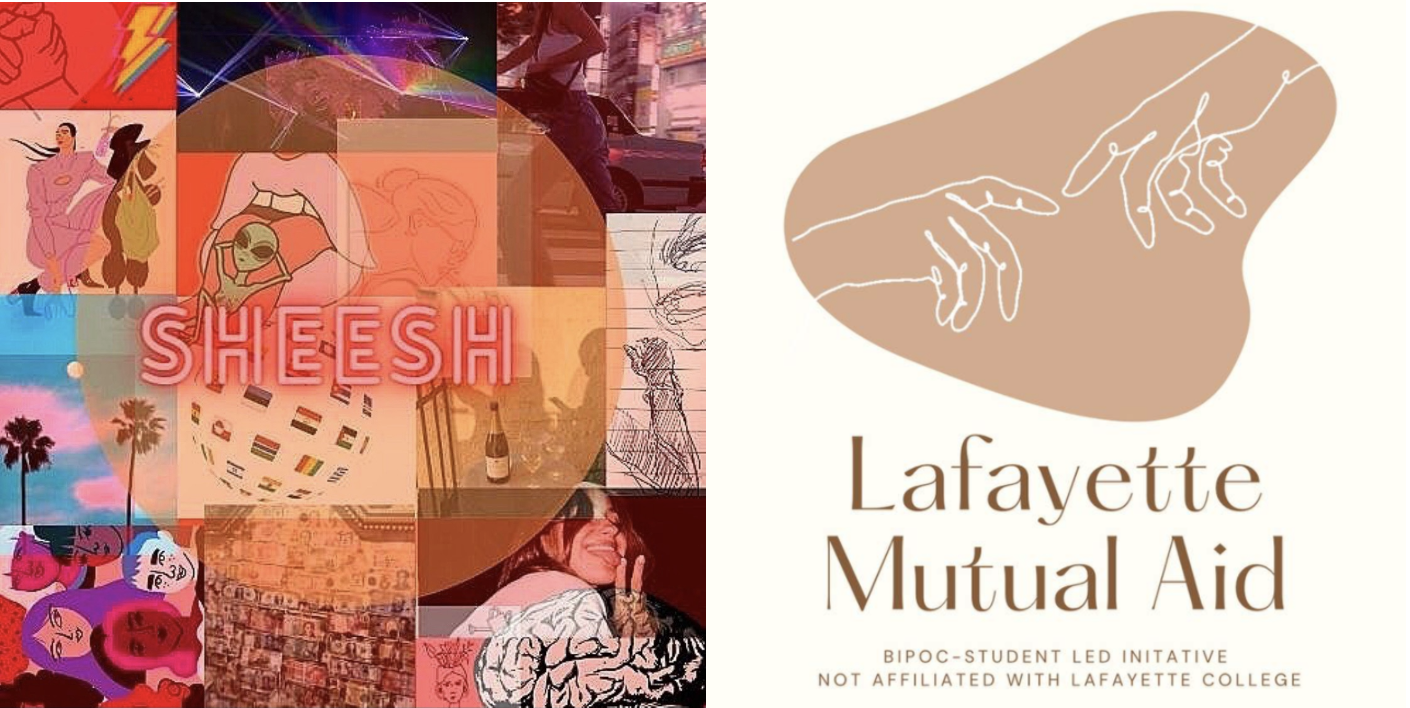 The Mutual Aid Fund is distributing the money raised to marginalized people at Lafayette and in the Lehigh Valley. (Photos courtesy of SHEESH/LMA Instagram pages)

Lafayette Mutual Aid (LMA) and SHEESH raised $6800 in just one day for Black, Indigenous and People of Color (BIPOC) students at Lafayette and members of the Lehigh Valley, exceeding their initial goal of $5000 by over 20%.

SHEESH is a new student-run club that was started last semester to provide social, academic and supportive resources to their members. The organization is dedicated to providing a safe space and community for all women and non-binary students. They took the initiative to reach out to LMA in order to offer their support, and ended up contributing $3600 to the total.

“They came to us and we really appreciated that because usually, BIPOC cohorts are always seeking out help from people who are privileged,” Savanna Toure ’21, one of the founders of LMA, said. “In this case, people that wanted to unlearn came to us and were like, ‘what can we do to help? We have resources. We have funding. Just tell us what you need.’ And mutual aid, we wanted that outreach.”

LMA is just one part of the Dear Lafayette College coalition, whose intent is to fight systemic racism on Lafayette’s campus.

“Mutual aid is a political community solidarity effort that’s outside of the state institutions and non-hierarchical,” Toure said. “It does focus on the most marginalized communities, so it’s mostly led by and should be led by Black and Brown people.”

“Our mission is to help uplift the communities on campus because I think there are a lot of outside structures that play a role in not allowing [BIPOC] students to fully exist on this campus like other students are able to,” Fatimata Cham ‘23, team member of Dear Lafayette, added.

SHEESH executive board members noted that they were all passionate about the values LMA promotes and were excited at the opportunity to help fundraising efforts due to their overlapping ideals regarding what improvements are needed on Lafayette’s campus.

“In SHEESH, we really preach inclusiveness and overall love for our community, so it just seemed right to offer support to Mutual Aid because they also stand for those things and give back to the community,” Cia Negron ’23, SHEESH co-chair of internal relations, said. “Also, they’re looking to directly support the BIPOC community, and in SHEESH we have members of all different backgrounds, so a lot of us can definitely empathize with that aspect.”

“One of our values is advocacy and activism and we’ll express that in any way we can,” Lulu Kirtchuck ‘21, President of SHEESH, added. “Fundraising is a really important part of that, especially for something like Lafayette Mutual Aid, where they’re specifically giving out funds to students who need it and can’t find those resources elsewhere.”

After the two organizations decided to team up, SHEESH took the main role in raising the funds, while Mutual Aid provided the education regarding where the money would be going and why the cause was particularly important.

“SHEESH basically led the initiative, so we just gave them information on our coalition and the work we do to help them better understand what they would be raising money for,” Cham said. “They created the Venmo ports and they did the infographics.”

In addition to giving their own members a minimum amount of money to raise, SHEESH also utilized social media in an attempt to reach the broadest scope of people and get them to donate.

“We used social media to encourage people that follow us and see our posts to donate,” Sabrina Gonzalez ’23, SHEESH external relations chair, said. “And we didn’t want to just make a typical Venmo board, so we decided to make dares that we would do in exchange for people donating.”

The fundraising effort finished on Feb. 23, with LMA exceeding their goal by over $1,000. LMA then started to distribute the money raised to marginalized people at Lafayette and in the Lehigh Valley. BIPOC people can request money through a form created by LMA.

“We’re already distributing funds. We have over 30 people that have requested the money right now. We cap it at 300 per donation to make sure it’s equitable,” Toure said. “It’s first come first serve but we still look at identities, as it is only for BIPOC students and community members. It also does prioritize people who are queer, undocumented, and disabled.”

Looking ahead, Toure and Cham both noted that while this fundraiser is coming to a close with the money being quickly donated to students and community members, LMA has no intention of stopping anytime soon.

“We will have to close the form whenever our fundraising gets too low, which we will have to do next week or this week,” Toure said. “But we’ll replenish it with more fundraisers because we’re in contact with a lot of community groups there are interested in fundraising for us.”

Donations can be made to their Venmo @lafmutualaid or their Cashapp $lafayettemutualaid.