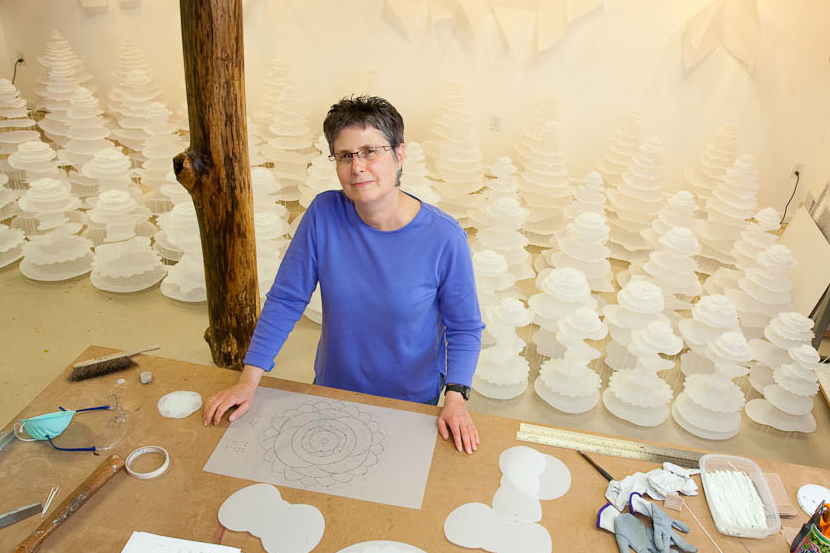 To artist and professor Rebecca Kamen, artwork can be a visual representation of scientific research and an attempt to capture its inner beauty.

This past Wednesday, Kamen shared her insights on how the arts and creativity in general can enhance innovation and our understanding of science. The talk was presented to a virtual audience consisting of students and faculty.

Kamen is a Professor Emeritus of Art at Northern Virginia Community College and a visiting scholar and artist-in-residence in the computational neuroscience initiative and the Department of Physics and Astronomy at the University of Pennsylvania.

Kamen began her lecture with a glimpse into the roots of her career interests.

“I grew up prior to the discovery of the computer, and curiosity sparked and served as a catalyst for my understanding of the world around me,” Kamen said. “And to fuel my curious nature, I began taking things apart to try to understand how they work…For me the act of disassembling and assembling helped me gain a greater understanding of the unknown and planted its seeds for using this form of investigation in my art science practice.”

Kamen then shared a presentation featuring her artwork that was inspired by neuroscience. She explained her process of “inquiry and discovery” and the insights gained while collaborating with different types of scientists, specifically scientists at the University of Pennsylvania who study the brain and the practice of curiosity.

Instead of thinking of herself as an artist or a teacher, Kamen said she considers herself a “natural philosopher.”

“[That is] really what scientists were before they were called scientists,” she explained.

Kamen’s primary artistic medium is sculpture, and all of her work is entirely hand-cut and hand-painted.

“My work is very labor intensive, but it is a way that enables me to process what I’m understanding about what I’m researching and then interpreting,” she said.

Kamen also discussed how crises, in the form of the pandemic and an unexpected brain tumor, have provided insight and inspiration for her work.

After her presentation, Kamen opened the floor to questions.

Art Professor Ed Kerns shared his appreciation for Kamen’s work and explained the importance of imagination in scientific conduct.

“I’ll just call Einstein up because everybody knows him. Imagine what he did with just experiments in his mind…he didn’t go at the speed of light,” he said. “One of the problems that stands between art and science all the time is this interposition of templates that create expectations of how you should proceed.”

Another participant asked Kamen her thoughts on art therapy.

Kamen explained that after she graduated from college in the 1970s, she had to decide between graduate school and art therapy, which at the time was just starting at a Manhattan hospital.

“I didn’t know emotionally if I could work with young patients that were sick, but I have to tell you I learned so much by working with each and every one of those young patients,” Kamen said.

“It was so inspiring. I think sometimes we have to go up against our fears and just know there’s a reason why certain things have crossed our paths or opportunities that have come to us so we can learn and grow and change.”