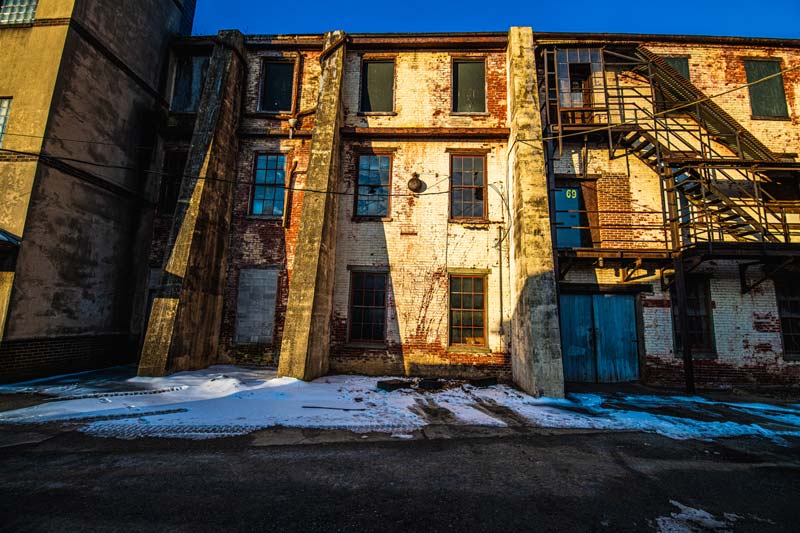 The renovation of the Rinek Complex is one of many on the Bushkill Corridor. (Photo courtesy of Lafayette Today)

The storied century-old Rinek Rope factory on Bushkill Drive is getting a facelift. Last December, Lafayette finally received a one million dollar grant to renovate the complex after three years of denied applications. This building has a deep history that both the city of Easton and the college hope to preserve and honor with the project.

The grant comes from the Redevelopment Assistance Capital Program (RACP), which is a Pennsylvania Commonwealth grant program. The original application included the renovation of Kunkel Hall as well as funding for repairs to the Rinek complex. However, over the following two years, the application was narrowed to just the complex, according to Vice President of Finance and Administration and Treasurer Roger Demareski.

“The project cost is about two million, the RACP grants do require a 100% match. So, the state provided a million, so we’ll match with a million,” he said.

Demareski said the college does not foresee any roadblocks for matching the grant, as they began to set funding aside out of their capital accounts when they first began applying. Construction is expected to begin this summer and be completed by the end of the calendar year.

The cost of the renovation was too high for the college to afford without the grant, although the school has been intermittently allocating smaller amounts over the last several years with the hopes that they would eventually receive the grant. Now, with the state matching Lafayette’s $1 million contribution, the renovation is coming to fruition.

“We’ve been very thoughtful and proactive planning for what we hope to be a success, and we’re thrilled we got the grant,” Demareski said.

Mayor of Easton Salvatore Panto said he supports the project and has been involved in helping the college acquire the RACP grant since the beginning.

“As mayor, the grant actually comes to the city. I wrote a letter of support and we went out and knocked on doors in Harrisburg to try to get this project done,” Panto said. “The knocking on doors was primarily for the Department of Community and Economic Development and the governor’s office, and they were very much in support of the project.”

The complex is planned to be split into three sections. The first will include two of the three buildings in the complex, which will be used as shops for Lafayette’s facility operations and custodial staff.

The second section, which will utilize the building closest to the new parking lot, will hold 100 facility employee parking spots and will be the location of the other two programs at the Rinek complex, Demareski explained, including a substation for the Emergency Medical Services (EMS).

“For years the Easton Emergency Squad–who is the main EMS provider for the city–they’re located on the south side of Easton and for many, many, years they have been inquiring of us if they could they have a substation somewhere on the north end of the city,” Demareski said.

Adding a substation on the north end of the city will help get emergency services to the northern part of the city faster, Panto explained. “What [Lafayette is] going to do with the Rinek Road company is giving the Easton Emergency Squad a northern satellite office. Those are really important to the quality of life for the city residents and the college students.”

The substation will also double as the location for the student-run EMS program that first went on-call in the spring of 2019.

“These things fall in place organically. Over time we identify some needs, so we knew engineering had a need, but we didn’t have a location, we knew the squad had a need, didn’t have a location,” Demareski said. “As projects come up or as opportunities come up we always try to see and test fit where we can satisfy different needs and in this case, those two needs are satisfied, really nicely down at Rinek.”

The final use for the complex will be as a “makerspace” for the engineering department. Jeffers Director of Engineering Scott Hummel explained that the new makerspace for the Civil and Environmental engineering programs will allow for much larger scale projects that they previously did not have space for on campus.

“You have environmental engineering projects, civil engineering projects, and these tend to be large and messy…there’s not a great place to do that on the main campus, there’s not a lot of room around Acopian for those kinds of spaces,” he said. “I think it’s a place where you could go for a longer lab, certainly, or for co-curricular activities and those kinds of things.”

The Rinek Cordage Company was founded by Jacob Rinek in 1840 and the complex was built in 1870. Rinek Cordage used the complex to produce large ropes for ships that aided in the construction of the Panama Canal, according to Hummel.

The location also has significant aviation history. Charles Norvin Rinek, the grandson of the founder, built the first all-aluminum internal combustion engine for an airplane when he was 18. This was only three years after the Wright brothers flew the first powered aircraft, according to Lehigh Valley News.

Additionally, the Rinek family were close friends with Thomas Edison and they worked together to install electricity and trolleys in the city of Easton, according to Lafayette Today. The college will honor this history with a display outside the building but plans on the design are yet to be finalized.

“I think it’s important that this piece of history is saved, and glad the college is determined to save this one. Usually, the college is very diligent in trying to save buildings” Panto said. “When [Lafayette] can save buildings, it will, when it can’t, it’s going to come back with a different plan. This one is one that was worth saving and I’m glad to see that the college is doing that.”