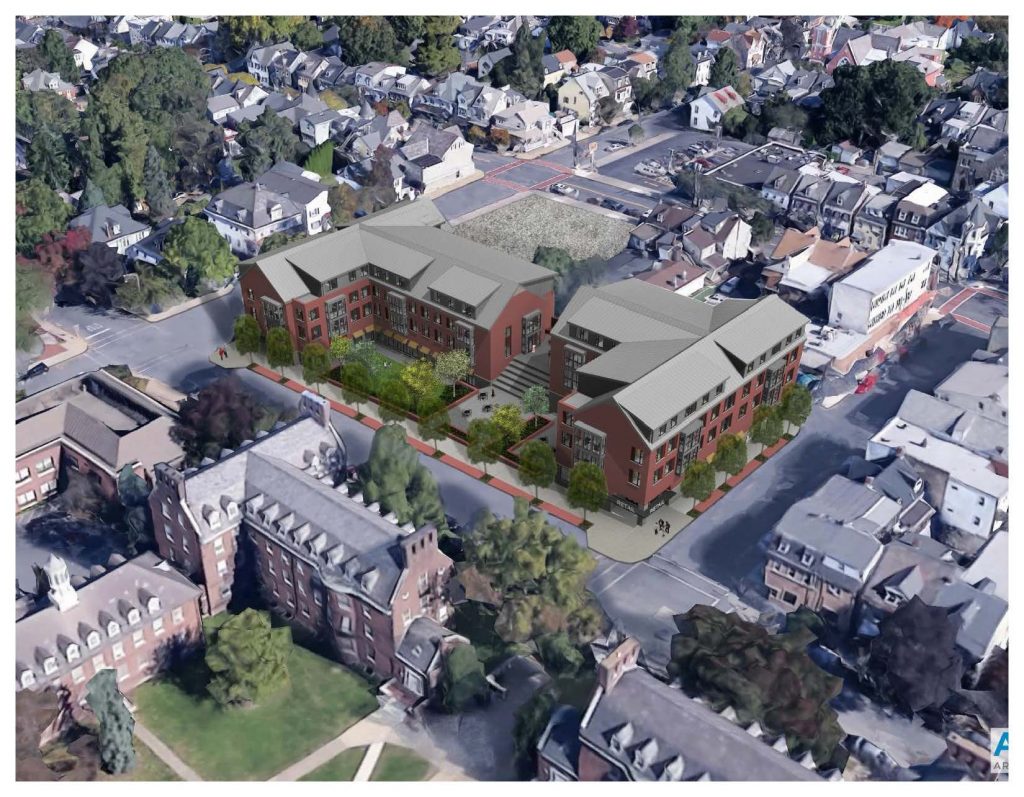 The McCartney residences will be the new home of the college bookstore. (Photo courtesy of Roger Demareski)

On Feb. 19, the college officially became an affiliate institution to the Worker Rights Consortium (WRC), a labor monitoring organization that works to combat sweatshop conditions and ensure that retail, like college merchandise, is produced ethically.

Lafayette’s decision to become an affiliate institution comes after fifteen months of effort by Lulu Kirtchuk ‘21 and Olivia Newman ‘22, who learned of the WRC while taking Globalization and its Critics with professor of international affairs Angelika von Wahl in the fall of 2019. Their action also comes as the college transitions to an all-new bookstore, moving from the basement of Farinon College Center into the recently opened McCartney building.

“We had a lecture one day where Professor von Wahl was telling us about the Worker Rights Consortium, and we looked at the affiliates page on their website and realized that Lafayette College was not listed,” Newman said. “We worked together as a class to write a letter to [President Alison Byerly] saying why we felt like we should be affiliated.”

Byerly was receptive to the class’ letter when she received it last year and formed a committee to examine the issue. The spread of COVID-19, however, shifted the college’s focus elsewhere and postponed progress.

This did not stop Kirtchuk and Newman, who, with the help of the Diversity, Equity and Inclusion Council Chair Jamila Bookwala, reached out to Byerly’s office this semester. They were happy to find out from assistant to the president for board and community relations Melissa Starace that Byerly had signed off on the proposal.

“This proposal being approved is huge because we’re making a lasting change,” Kirtchuk said. “I’m really appreciative that it ended up being so well received by the administration. It is an issue that should be well received, and I’m really glad that it was.”

Von Wahl commended Kirtchuk and Newman for their “hard work,” adding that “the two emerged as dynamic and committed student leaders after our whole IA class wrote a brilliant letter to the President two years ago about this problem.”

Bookwala was also enthusiastic about their efforts.

“I applaud Kirtchuk and Newman for their perseverance on this initiative,” she said. “[They] reminded us that we must continue to strive for equity and social justice despite—rather, especially during—the pandemic.”

“Lafayette was already set to join the Consortium before COVID, and Lulu and Olivia’s leadership propelled us to take action,” she added.

Kirthchuk and Newman noted that there is still work to be done. They expect the process of becoming an affiliate member to last until the beginning of May, and hope that Lafayette can join the WRC before many students buy new merchandise for the Lafayette-Lehigh football game in the spring.

They also noted that only goods from the college store are monitored by the WRC, so they are urging the college to monitor the merchandise produced by student and Greek-life organizations, too.

“Everyone at the college who sells or gives away t-shirts should get on board so that they can wear their gear with pride,” said von Wahl.

“I think it’s something that people should really take into consideration in the future as Lafayette students, how to make a change for the better on this campus,” said Kirtchuk. “Because if you don’t do it yourself, then no one no one’s going to do it. This will hopefully open everybody’s eyes to the ways that we can make change here, and that it is possible.”