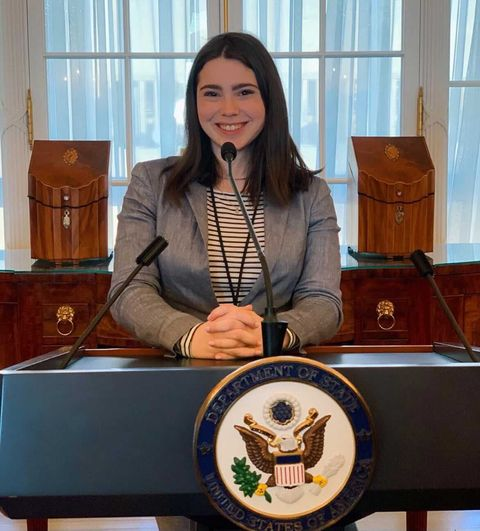 This past fall, Kaitlyn Ahern ’23 contributed to the Jon Ossoff for Senate campaign. But her activist work started long before then.

Growing up in Scranton Pennsylvania, located a few miles from one of the largest landfills in the United States, Ahern explained that she felt confused and abandoned by the passivity of local politicians regarding the expansion of the landfill.

And at eight years old, she had an encounter with then-Senator Barack Obama on his first Presidential campaign trial, where he told her, “The greatest thing about America is that anyone can make a difference in it.”

Since then, she has used political involvement to speak out against injustice.

Ahern’s work on the Ossoff campaign last fall included conducting voter metrics research in the Atlanta-Metro region and speaking directly with voters to persuade them to vote for Ossoff and Senator Raphael Warnock.

As she has been volunteering for campaigns every year since she worked on a Pennsylvania’s senator’s campaign in 2014, Ahern noted a significant difference between the Ossoff campaign and previous ones, primarily due to the pandemic and the 2020 presidential election.

“Everyone knew that it was incredibly important to get the right people elected, but it was completely virtual,” she said. “I’ve never been to Atlanta, and getting to know the people and the atmosphere and the city through the Internet was very different as a campaign worker.”

In general, Ahern said her activism emphasizes intersectionality, but a few issues that are especially important to her are income inequality, racial injustice and climate change.

“My work in the future will be directed towards raising awareness about a wide variety of problems, while encouraging others to take action to fix them,” she said.

Ahern recently accepted a summer position as a Capitol Hill lobbyist with Generation Ratify, a youth-led movement aiming to ratify the Equal Rights Amendment. She is also a freelance journalist who has been featured in the Scranton Times, the Philadelphia Inquirer, the New York Times and CNN.

Currently, Ahern is working on a piece about the pipeline from private schools to elite colleges. Her exposé questions whether there is a price tag for success.

“I have so many friends here who were given opportunities that students in public schools could never afford or have, and I think that’s a topic that isn’t reported on enough in journalism,” she wrote in an email.

According to Ahern, being a young freelance writer in politics has its drawbacks.

“One of the pitfalls of being so young is that not a lot of people want to publish what you have to say,” she said.

Ahern turns to social media, specifically her Instagram page, when she is unable to get a piece published.

Currently an international affairs and government and law double major at the college, Ahern is interested in pursuing political journalism or political reporting full time after graduation. Her goal after earning her degree is to get a full piece published in a paper.

Ahern is also studying cyber security virtually through the Massachusetts Institute of Technology.

At the end of the day, Ahern preaches local, community activism as the best kind.

“For anyone who is looking to get involved with activism, I really encourage them to start locally. There are so many great resources that are at our fingertips in our neighborhoods, in our towns and in our school districts,” she said.