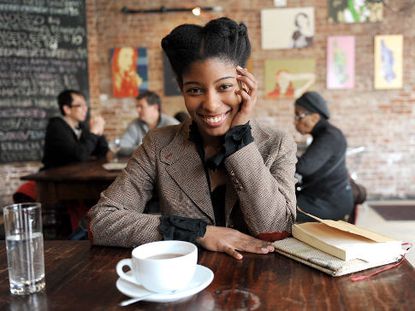 Nonfiction author and essayist Sharifa Rhodes-Pitts writes about the culture, politics and history of the African diaspora in her work. (Photo Courtesy of New York Daily News)

“I think of myself as a writer whose material is history,” nonfiction writer Sharifa Rhodes-Pitts said in a Zoom reading this past Wednesday. “While not being a historian by trade, history is the matter of what I make.”

Rhodes-Pitts’s writing focuses on the culture, politics and history of the African diaspora. She is the author of “Harlem is Nowhere: A Journey to the Mecca of Black America” and “Jake Makes a World: Jacob Lawrence, A Young Artist in Harlem.” Additionally, her essays have appeared in The New York Times, Harper’s, Essence and Vogue, among other publications.

She read aloud four short essays for the virtual event.

The first essay, “Boulevard de Magenta,” detailed her time living in Paris. “Boulevard de Magenta” was written as a text to be incorporated in a Rhode Island School of Design Museum exhibition helmed by the sculptor Simone Leigh, a friend and frequent collaborator. The essay is available online as a sound piece.

Her second essay, “The Music of the Spheres,” compared a piece of forgotten history to an inaudible, universal hum. It was presented at Loophole of Retreat, a 2019 conference held at the Guggenheim Museum that highlighted works by Black women artists, writers, and theorists.

Rhodes-Pitts described her third essay, a 2014 piece called “Freed But Not Free,” as one that is “unfortunately very evergreen.” The essay explored the limited nature of freedom for Black Americans in a country plagued by the legacies of slavery and colonialism. It was originally published on Creative Time Reports, a now defunct news outlet that described itself as artists telling the news.

Finally, Rhodes-Pitts read “From Where They Stood,” a relatively new essay that she finished editing a few weeks ago. The essay was commissioned by a compilation catalogue dedicated to the centennial commemoration of the 1921 Tulsa race massacre.

Rhodes-Pitts explained that the Tulsa Massacre is the colloquial name of the destruction of the Greenville district in Tulsa, Oklahoma, also known as Black Wall Street for its affluent residents. The incident was incited when a young Black teenager was taken by the police after being accused of assaulting a 17-year-old white girl, causing the Black citizens of Tulsa to surround the police station in an attempt to interrupt the inevitable lynching. In retaliation, a mob of white men burned the neighborhood to the ground. This eventually culminated in the local police dropping an aerial bomb on Tulsa.

“It was the first time that a bomb was dropped on a Black community in America,” said Rhodes-Pitts. “But not the last.”