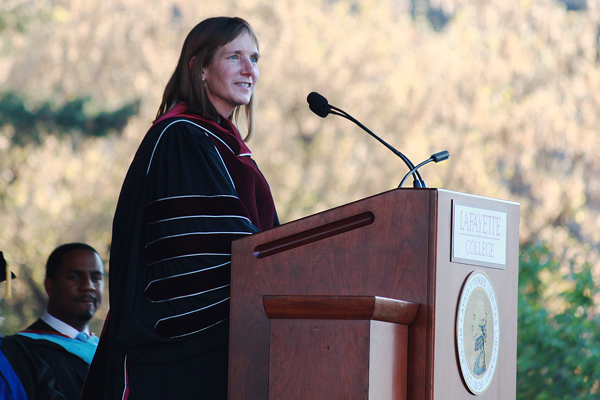 When President Byerly announced she was stepping down, Robert Sell stated they would begin the process immediately with the goal of finding a new president by the time she steps down at the end of June 2021. (Photo by Ally Hill ‘15)

The search for Lafayette’s next president is well underway and is expected to finish in time for a smooth transition this summer, according to Chair of the Board of Trustees Robert Sell ’84.

President Alison Byerly announced her intentions to step down in a memo to the community last October, stating that she would end her tenure at the conclusion of her second contract on June 30. Sell followed up hours later in another memo to the community, indicating that the process to find Lafayette’s next president would begin “immediately.”

Since then, Sell and the board have impaneled a body of faculty, alumni, current students and Board of Trustees members into the Presidential Search Committee. The college is also working with Shelly Weiss Storbeck of Storbeck Search, whom Sell refers to as the “dean of college search.”

The search process has been roughly divided into three stages. The first, which was conducted by the committee primarily over the interim, involved gathering feedback from the Lafayette community about the college’s vision and future to guide the search. The committee, along with associates from Storbeck Search, hosted 21 virtual town halls and spoke to 625 members of the community before synthesizing their findings into a document called the President Prospectus. They also solicited feedback through an online survey, which had over 2427 respondents, according to assistant to the president for board and community relations Melissa Starace.

The prospectus is available for reading online, and functions as both a job description for the presidency based on community feedback and also includes “a little bit of [Lafayette’s] own story and what we want the market to know and appreciate about us,” according to Sell.

Sell said that one point of emphasis he heard across all constituencies during the initial listening stage was the need for community.

“We heard that…what makes Lafayette a special place, but also challenges Lafayette, is maintaining a sense of community,” he said. “We are a particular school with a particular size, that should translate into a uniqueness and a differentiating set of characteristics of our graduates.”

In addition to its size, Sell highlighted Lafayette’s unique offering of liberal arts and engineering as one of its differentiating characteristics. He described this balance as the “special sauce of the Lafayette experience,” and the prospectus notes that one of the president’s jobs will be to emphasize “Lafayette’s signature distinctions…and convey…the unique value of a Lafayette education.”

Jonathan Ellis ‘98, an alumni representative on the committee and former president of the Alumni Association, said that the alumni were especially interested in emphasizing this value and “elevating the profile of Lafayette on a national stage.”

“Elevating the school…not only enhances the perception of the degree for both students and alumni, but also strengthens the community overall,” he said.

In addition, Ellis said many of the alumni stressed the importance of Lafayette’s commitment to diversity, equity and inclusion, a sentiment which was expressed in other constituencies as well. The prospectus includes a requirement that the next president have a “sophisticated understanding of diversity, equity and inclusion” and notes that, “while Lafayette has had some successes, the college has also identified areas where there is work to be done.”

Student Government President Mary Zimmerman ’21, the student representative on the committee, wrote in an email that current students have also emphasized the importance of a president with a strong commitment to diversity, equity and inclusion, in addition to one “who is accessible to the student population and transparent in communication.”

Lafayette’s next president will have the opportunity to shape the direction and vision of the college for the next several years, but they will also be faced with a number of challenges. From the fiscal uncertainty caused by the COVID-19 pandemic to the ongoing movements to combat racial injustice and sexual misconduct on campus, the college’s 18th president will immediately be tasked with a large number of fiscal and social responsibilities.

Building the college’s financial resources is one requirement listed in the prospectus. Following the success of the college’s “Live Connected, Lead Connected” capital campaign, which ended in 2018 and raised over $400 million, the next president will be responsible for continuing this momentum into the 2026 bicentennial celebration, in addition to finding other “creative ways” to address financial challenges, many of which were brought on by the COVID-19 pandemic, according to the prospectus.

“Everybody is looking for a strong leader. These are difficult times,” Sell said. “Leadership isn’t just standing there and pronouncing, having a vision, it’s being able to execute on the vision. It’s being able to articulate the power of the vision and the trade-offs, and to bring people along with the vision.”

One of Byerly’s biggest undertakings as president was the Affordability and Distinction through Growth initiative, which is a comprehensive plan to grow the size of the student body to provide additional revenue for financial aid. Before the pandemic, the college was on-track to meet the yearly enrollment goal, but now the future of the project is uncertain.

The college won an appeal last September for phase two of the McCartney construction as part of the growth initiative that would allow them to demolish several houses on College Hill to make room for a new 169-bed residence hall. However, the permit granted to the college is valid for up to five years, and the role of the next president and the timeline for this project are currently unclear.

With the initial listening stage completed, the committee is now partway through the penultimate stage in the selection process. Based on the results of the first stage, Storbeck and the committee are working to procure a list of “20 to 30” candidates from which the final two candidates will be presented to the board, according to Sell. This winnowing process involves interviews with the candidates and continued research and deliberation by the committee.

When the list is finalized, which is scheduled to happen around the end of March on the search committee website, the remaining candidates will be put through an exhaustive reference check and will be invited to campus to meet with the committee and other constituencies. Once this stage is complete, the board will select the next president.

Ellis said he was excited about the candidates currently being considered for the position.

“I’ve been very impressed with the pedigree of the candidates thus far,” he said. “They are individuals who are very accomplished in their own right, professionally and personally, and the fact that they are interested in this role is…validation of what Lafayette offers in the higher education landscape.”

“We are attracting a very, very qualified and very interesting, very dynamic and very diverse group of candidates,” Sell added. “I am confident that we will have Lafayette’s 18th president selected by late spring…and we will be in order to effectuate a proper transition with president Byerly.”